Clyde Phillips
Run[1] is the fourth of twelve episodes in Season Seven of Showtime's series DEXTER, and the seventy-sixth overall episode of the series. Directed by John Dahl and written by Wendy West, it first aired 21 October 2012 on Showtime.

The estimated number of viewers for the episode during its original airing was 2.18 million.[2]

After capturing a deadly killer, things go awry for Miami Metro, sending Debra into a tailspin. In an effort to help his sister, Dexter enters into a dangerous game of cat and mouse, while the Koshka Brotherhood continues to seek revenge.

Dexter and Masuka investigate Speltzer's mausoleum. Dexter hints that one of Speltzer's trophies is missing from a stand, which leads Masuka to deduce that Ray had stopped by the mausoleum after murdering his latest victim. Deb has a gruesome nightmare of herself in Rita's position, bleeding out in her bathtub. At work, she calls in Dexter to talk about his urges. She partially blames him for Rita's death and criticizes him for going after Trinity. He angrily tells her to back off or his Dark Passenger will overpower him.

Speltzer is found at a scrapyard (presumably collecting materials to use in an upcoming maze) by the police and puts up a fight. Since Ray's mask prevented Deb from identifying him, LaGuerta stresses that without a confession, Ray will most likely walk. Deb meets Speltzer in the interrogation room and begins by showing him a picture of his mother. Ray reacts in a strange way, and Deb suggests that he killed attractive, "easy" women because they mirrored his mother. When Deb begins insinuating that Ray had incestuous fantasies of his mother, he jumps out of his seat and roars, "I should have killed you like I killed the other bitch," ultimately confessing to the murder.

At The Fox Hole, Isaak Sirko looks deeper into Dexter Morgan's file. When he learns that both Dexter and Louis Greene worked for Miami Metro, George Novikov suggests that Viktor was killed simply for being foolish. Sirko violently reacts, asserting that Viktor was loyal and did a better job than Novikov. Miami Metro then shows up at the club, and Joey Quinn notifies Novikov that Metro won't leave until Anderson's shooter is apprehended. Novikov then attempts to bribe Quinn into leaving but fails.

Isaak Sirko visits Alex Dubrozny, a bartender at the Foxhole club. Sirko promises Alex that, if he kills himself, his entire family's future will be secured by the Koshkov Brotherhood. However, Dubrozny is forced to write a suicide note confessing to Mike Anderson's murder, and he shoots himself with the gun used to kill Anderson. Back at Miami Metro, LaGuerta shows a copcam video of four officers apprehending, and beating in the process, Speltzer. LaGuerta explains that the argument was made in court that Speltzer did not actually understand his rights, and he walked. Speltzer also plans on filing a lawsuit of excessive force against the department.

At the Briar Cemetery, Dexter sneaks into Ray Speltzer's RV where he finds steroids and trophies of his victims - earrings. As he is leaving, Ray unexpectedly shows up and the two briefly fight. Speltzer's brute strength overpowers Dexter's jiu jitsu training, and Dexter is knocked unconscious. He wakes up in a dark, abandoned factory and finds a note labeled "Run". Not feeling threatened, Dexter begins exploring but finds Speltzer, donning his bullhorn helmet and a large axe. Speltzer chases Dexter deep into the maze, leading him to a lower and lower floor. Dexter gets the idea of going upstairs instead, and finds himself on a rooftop. Dexter escapes, but not before Speltzer sees his face.

Fearing Speltzer could track him down and kill his loved ones, Dexter sends Harrison away to stay with Astor and Cody for a while while he deals with Speltzer. Deb attends Garrett's funeral. She spots Speltzer in the parking lot and verbally assaults him for being there. Back at Miami Metro, Angel tells Quinn that he doubts that Alex Dubrozny killed Mike Anderson, commenting that it was all too "neat" and "easy" and he's sensing that it's all a setup. Quinn attempts to talk him out of it, but reluctantly agrees to go back to the club again to make sure Alex isn't a mob patsy.

Back at the cemetery, Dexter finally captures Speltzer. He then kills and cremates his body with the blood slides, to prevent anyone from finding them again. Deb meets Dexter at the crematorium and when she arrives, he comments that smoke rising from the crematorium chimney is Speltzer. Dexter asks Deb how she feels and she tell him that shes "glad". She is shocked to freely admit this, but Dexter simply tells her that it's all part of being "human." 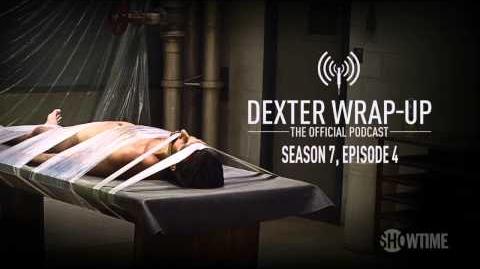 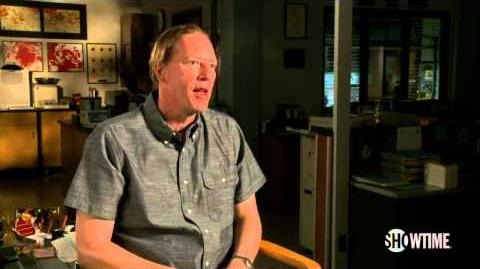 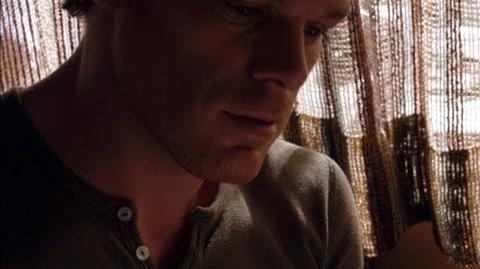 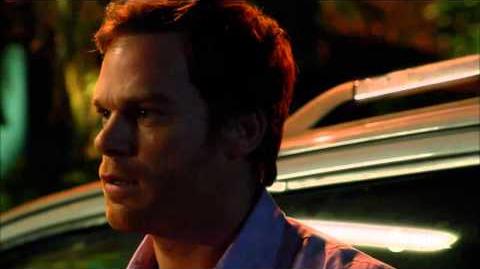