Clyde Phillips
Buck the System[1] is the third of twelve episodes in Season Seven of DEXTER, and the Seventy-Fifth overall episode of the series. It first aired 14 October 2012 on Showtime.

The estimated number of viewers for the episode during its original airing was 1.98 million.[2] The episode was directed by Stefan Schwartz and written by Jace Richdale.

Dexter tries to bring Debra on board with his new target. While the Koshka Brotherhood seeks revenge for the killing of one of their own, Quinn grows close to a dancer at the The Fox Hole.

Dexter stands impatiently in line at a crowded post office as his frustration grows. His Dark Passenger is growing stronger as Deb prohibits him from leaving the house at night. When a postal clerk closes the window in his face, Dexter fantasizes about slashing her throat. Moving over to the next clerk, he anonymously mails two packages with a plan to get rid of Louis Greene. The prosthetic hand is sent to Miami Metro Forensics and the video of Louis with a hooker is sent to Jamie Batista, who is dating Louis.

At the morning briefing, Dexter is annoyed by Vince Masuka's remarks and fantasizes about stabbing him in the neck.

After the briefing, Dexter tries to collect a DNA swab from an uncooperative suspect. However, the man keeps pulling away and making sarcastic comments. This provokes Dexter who loses control. He grabs the man's throat and pushes him to the floor. Deb, who has been watching, rushes into the room, shouting, "What the fuck?" as the suspect lies on the floor, panting. Deb demands that Dexter leave the room.

Outside, Deb asks Dexter what is wrong with him. He tells her that being watched by her all the time is driving him crazy, adding that if she doesn't back off, "something bad is going to happen." Dexter says that if he doesn't control his need, it will control him. Deb insists that she is trying to help him control it, but he retorts, "No, you're trying to suppress it, to lock it away. But the lock is not gonna hold. You saw what happened in there. The only way I can control it is to channel it the way Harry taught me." Although Deb doesn't agree, she promises to back off and tells him to hang in there.

Dexter looks over the file of a parolee, Ray Speltzer, who was arrested but not convicted of the murders of two women. Dexter believes that Speltzer will kill again and stalks him at the gym. He notes that Spelter grew his hair out, and still looks strong and hostile.

Nadia, a stripper from The Fox Hole, waits for Quinn at his desk. She asks if he will retrieve Kaja Soroka's bracelet from evidence so she can be buried with it. Quinn checks the file and says that no bracelet is listed. He then asks Nadia out and she suggests making dinner for him.

When Nadia returns to The Fox Hole without the bracelet, George Novikov is skeptical that Quinn told the truth. He reminds her that if the police find the GPS chip in the bracelet, the Koshka's heroin operation will be ruined. Isaak Sirko sits down next to Nadia and talks to her in a pleasant but subtly terrifying manner. He asks her to grow close to Quinn and find out what the police know about Viktor Baskov. She fearfully agrees.

After Nadia leaves of office, Isaak tells George and Jurg that Viktor is smart and probably took the bracelet off Kaja. He decides to find the IT guy and have him track the bracelet, which will lead to Viktor.

Back at Miami Metro, the package that Dexter mailed earlier arrives. Masuka opens it, and finds the prosthetic hand with intricate colored lines drawn on the palm. With it is a letter that Dexter forged, saying:

"Dear Mr. Greene, When I bought the Ice Truck Killer's hand online I assumed it would be in mint condition, not with lines drawn all over its palm. Please refund all my money immediately."

Masuka is shocked and accuses Louis of having the hand the whole time.  He immediately fires the intern for stabbing him in the back. On his way out, Louis glares at Dexter who just smirks. Masuka sullenly remarks, "I have the worst luck with interns."

Meanwhile, Wayne Randall's mother appears at the station and gives a bag of her son's souvenirs to Deb. She held them for fifteen years but now that Wayne is dead, she hopes they will help bring peace to the victims' families. Dexter looks through the items, which include books of matches, a tee shirt, a toy giraffe, a lighter, and a necklace with the name "Janice" on it. Since Janice DuBois was one of Wayne's victims, Dexter suggests that these trophies can be matched to other victims. Quinn steps in to announce that Tony Rush was just found dead with a screwdriver in his head.

Louis returns to his penthouse where he finds Jamie watching the video diary of him with a call girl. She's enraged when he states, "It’s not cheating if you pay for it." When Jamie says the tape was anonymously sent to her, Louis insists that it was from Dexter whom he claims is trying to ruin his life. She angrily dumps him and he boils with rage.

Dexter lures Deb to Speltzer's bar, Sugar Mill Saloon. He shows her Speltzer, newly bald, and says he has a ritual of shaving his head before he kills. Dexter tells her that Speltzer appears to be hunting his next victim and nods to Melanie Garrett, the barmaid. Deb angrily orders him to lay off Speltzer, but Dexter secretly plans on getting evidence to convince her of his guilt.

Dexter stalks Speltzer at Briar Cemetery where he works as a groundskeeper. Before he can break into the mausoleum which he believes is special to Speltzer, he's called by Deb to immediately report to her office.

At The Fox Hole, an IT technician informs Sirko that the GPS on the bracelet was tracked from Viktor's apartment to the airport, to a marina, and then eight miles out to sea where the signal disappeared. Sirko concludes that he was murdered and furiously demands that the technician pinpoint the exact slip at the marina.

As soon as Dexter enters Deb's office, she questions him. He admits that he was stalking Speltzer at the cemetery and says he would have found the evidence had she not interrupted him. He appeals to her to let him break into the mausoleum because his "lizard brain" is alerting him that Speltzer will kill again. Deb refuses and, demanding they follow the law, says she'll get a search warrant. Dexter, though, insists there isn't time. To keep Dexter away from Speltzer, she assigns him and Batista to question and collect DNA from Hannah McKay.

Before going to Hannah's house, they stop at The Fox Hole. Batista confronts George Novikov while Dexter chats with a stranger - Isaak Sirko. Unwittingly, Dexter tells him, "I hope you find what you're looking for."

At Hannah's nursery, Batista and Dexter are rudely addressed by her. She refuses to talk about her past because she wants to put it behind her. Hannah attends to her plants as Batista pressures her to open up about Wayne's victims. Dexter shows her a court order for DNA and she tells him to be quick. She's amused when his hand shakes and he drops the swab. His second attempt is successful.

When Deb asks Maria LaGuerta for a search warrant on Speltzer's mausoleum, she's told there isn't enough evidence. However, she lets Deb assign a patrol car to watch Speltzer.

At Dexter's marina, Louis is drilling a hole in Dexter's boat in order to sink it when he's interrupted by Sirko, Novikov, and Jurg. Initially, Louis tells them that he owns the Slice of Life but after Sirko intimidates him with a drill bit, he admits that it belongs to Dexter Morgan. Sirko then shoots Louis in the head and orders Novikov to dispose of the body.

At night, Dexter climbs the fence into Briar Cemetery while Melanie Garrett simultaneously shows up at Speltzer's house.

Quinn is at Nadia's apartment. She tells that her bosses ordered her to get close to him to find out what the police know. She is frightened to return with nothing. Quinn suggests they help each other out. He will provide her with enough information to keep her bosses happy. In return, she will tell him if she hears anything about Mike Anderson's murder. They agree and kiss.

Dexter finds Nina Fleischer's earring, one of Speltzer's trophies, inside the mausoleum. He tries to send a picture of it to Deb, but the mausoleum has no cell service.

After entering Spletzer's house, Melanie begins to feel uneasy because the sofa is covered in plastic and his behavior is odd. When Spletzer says he wants a challenge and that she looks strong, Melanie realizes she is in danger. Suddenly, Speltzer attacks her and drags her into his self-constructed "Minotaur Maze." He turns on loud music to mask her screams and stalks her while wearing a bullhorn helmet. When Speltzer catches Melanie, he beats her to death and rips off an earring as a trophy.

Deb stakes out Speltzer's house until she sees the lights go out. As she begins to leave, strobe lights flash in the windows and she walks up to the house where she hears screams from inside. Meanwhile, Dexter receives the message from Deb and he hurries to Speltzer's house.

Deb breaks into the house and confronts Speltzer, but he knocks her down and is about to kill her. However, Dexter shows up in time and hits him with a plank. They find Melanie's lifeless body as Speltzer escapes. Realizing that Melanie would still be alive had she let Dexter kill Speltzer, Deb is struck with tremendous guilt for the loss of life. She tells Dexter that even though she cannot condone what he does, she understands his "code" and she concedes that his activities might be a "necessary evil."

Dexter stalks Speltzer at the gym

Isaak tells Nadia to get close to Quinn

Jamie watches video of Louis with a call girl

Isaak and Dexter as strangers

Isaak and George on Slice of Life 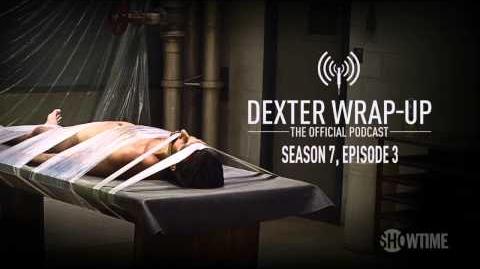 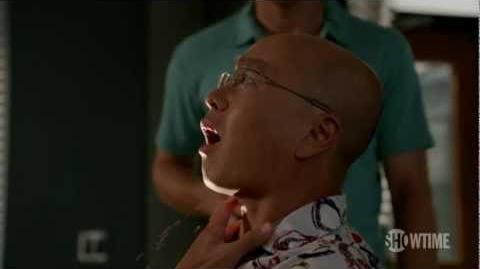 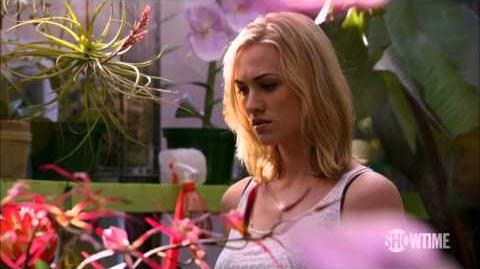 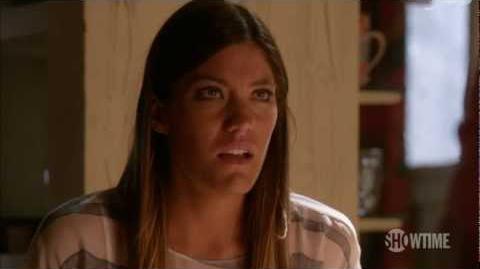 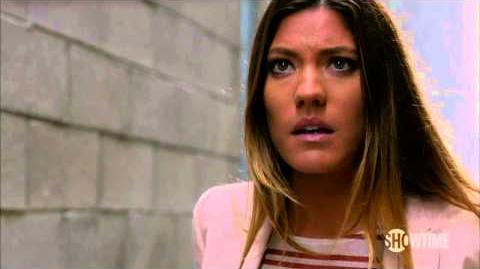