Clyde Phillips
Sunshine and Frosty Swirl[1] is the second of twelve episodes in Season Seven of DEXTER, and the Seventy-Fourth overall episode of the series. It first aired 7 October 2012 on Showtime.

The estimated number of viewers for the episode during its original airing was 2.10 million.[2] The episode was directed by Steve Shill and written by Manny Coto.

When a local convict claims he has new information regarding a fifteen-year-old crime spree, Miami Metro sets out to unearth new evidence on the case. Debra attempts to cure Dexter of his killer tendencies. Meanwhile, the Mike Anderson Murder Case leads to the Ukrainian Mob and a vengeful Louis Greene won't stop meddling with Dexter's life.[3]

Following Dexter's big reveal to Deb that he’s a serial killer, she runs from his apartment. Dexter chases her, finally catching up when she stops to vomit. He tries to calm her, but she won't let him touch her. In disbelief, Deb asks how long he's been doing this. Dexter tells her since he was twenty, but he only kills certain kinds of people and Harry taught him a code. Shocked that her father knew, Deb continues to sob. Concerned they may be noticed by others, Dexter persuades Deb to return to the apartment to talk. He explains his "dark passenger" and the Code, but Deb vehemently reminds him that she's Lieutenant of Homicide. When he asks what she's going to do, Deb punches Dexter in the face and storms out. "Harry" chastises Dexter for not being more careful. Dexter doesn's know why the prosthetic hand it there and wonders if it's a message from someone else who is on to him.

At the office, Debra looks up the Bay Harbor Butcher. An online article says, "According to FBI Special Agent Frank Lundy, it's almost certain that the Butcher is still at work. Serial killers have an addiction and will continue to kill until they're caught.”

Dexter realizes that If the prosthetic hand found in his apartment is genuine, it can't still be at the station. While he’s searching through evidence storage, a panicky Vince Masuka walks in and tells him about the hand being stolen by Ryan Chambers. Masuka says he put Louis Greene in charge of finding it. He's relieved when Dexter says he's not going to turn him in. Dexter, though, needs to find out what Louis knows about him.

At Debra's next briefing, she orders the The Fox Hole strip club to be shut down twice a day until someone tells them something about Mike Anderson's death. Debra then moves on to Wayne Randall (who went on a three-state killing spree with his girlfriend fifteen years ago). Wayne now claims to have evidence of three other murders that he committed in the Miami area, and he wants to lead investigators to the buried bodies to clear his conscience. Dexter volunteers for the job, but Debra assigns Masuka.

Talking privately outside the station, Debra tells Dexter that she came very close to arresting him, and even thought about what she would say to the press. She devises a plan to help Dexter with a kind of rehab, which basically consists of him moving into her place so she can watch him 24/7. He scoffs, but she demands that he give it a try.

Maria LaGuerta hears back from a private lab that the blood on the slide found in the church belonged to Travis Marshall. She instructs the caller to keep it confidential and then calls the FBI.

The cops shut down the strip club yet again which angers the manager, George Novikov, who calls it harassment. George insists that he doesn't know who killed Kaja or Mike, but Angel Batista doesn't believe him since Kaja was beaten to death in the club's parking lot.

While asking questions, Quinn hits it off with a dancer, Nadia. She gives him the name of Kaja's bouncer boyfriend, Tony Rush, (who didn't show up for work). Quinn leaves his card with Nadia.

On the first night of her serial killer rehab, Debra instructs Dexter that he'll be sleeping in her bed, while she sleeps on the couch near the door. Her main rule is that he must be completely honest with her. During spaghetti dinner, Dexter tells Deb that his need to kill starts with seeing blood which then turns black. During the night, Dexter researches Louis Greene's penthouse, knowing that it will be next to impossible to get in with Deb watching his every move.

Quinn and Batista interview Tony Rush, who has little to say. Security tapes, though, do back up his alibi for the night of Kaja's murder. Tony drops Viktor Baskov's name as the one Kaja left the club with that night.

Masuka complains about having to work the Wayne Randall case. He says it's mostly waiting around while the diggers try to find bodies. Dexter volunteers to relieve him, but he needs Debra's permission. She agrees and is all set to go with him until Angel shows up with the info about Viktor, a member of the Koshka Brotherhood.

While at the dig site, Dexter strikes up a conversation with Wayne Randall. Dexter asks about his change of heart, and Randall says he decided to "surrender."

During lunch hour, Dexter breaks into Louis Greene's penthouse. He notices a paper with his credit card numbers, which solves the mystery of who canceled them. He turns his attention to Louis's computer. He searches a folder named "Rants," which are mostly Louis talking about his collectibles. There is also a video of a call girl giving Louis oral sex. Then he hears Louis mention Dexter's name: "This is going to be worse than Bob Henley. He got off easy. I want to see Dexter lying in his own piss and vomit, and I won't stop until that represents the high point of his day. No one fucks with me. No one." Dexter pulls up an article about Bob Henley, who was arrested after the FBI found child pornography on his workstation. Dexter suspects that Louis took control of his software company by setting Henley up. He wonders what Louis has planned for him.

Louis comes home unexpectedly and sees his laptop open. Dexter pins him against a wall, demanding to know why he's screwing with him. Louis says it's because Dexter trashed his video game. Dexter, outraged, states that he never wants to see Louis again, either at work or with Jamie.

Back at the dig site, Debra is upset that Dexter arrived late and didn't answer her messages. Wayne notices the dispute and Dexter tells him about the boss/sibling dynamic. He asks Wayne for clarification on his having "surrendered" line. He explains, "I just accepted my situation, you know, of being where I am. Prison. People watching your every move. It is what it is. Once I stopped fighting it, the anger just fell off... like a bad scab."

After yet another strip club shutdown, George returns to his office to find Isaak Sirko, a leader in the Koshka Brotherhood, waiting for him. Isaak had flown to the U.S. because Viktor Baskov never arrived in Kiev. Luckily for George, Isaak believes him when he says he knows nothing about Viktor's disappearance.

Nadia calls Joey Quinn and asks for a ride home from the club because her car won't start.

The FBI sends the blood slides from the Bay Harbor Butcher Case to LaGuerta. She compares them to the one found at the church, noting the similarity.

Dexter arrives home, annoyed to see Louis there, hanging out with Jamie Batista and flaunting the fact that he's not scared of him. Dexter realizes that Louis won’t quit unless he stops him.

Quinn drives Nadia home and she flirts with him, without providing more information. She suggests that he pay for her car repairs since she's losing money due to the frequent club closures, and kisses him on the cheek.

During dinner, Dexter injects a sedative into Debra's steak so he can sneak out while she's asleep. After breaking into Louis Greene's penthouse, Dexter injects him with M99, intending to kill him. After a few seconds, though, he considers his promise to Deb and drives to a park with Louis in his trunk. Dexter calls a sleepy Deb and asks her to meet him there. When she arrives, Dexter admits that he was tempted to kill, but did not go through with it. After a reassured Debra drives away, Dexter leaves Louis, still unconscious, on a park bench, thinking, "I still need to get you out of my life, but not by taking yours."

The next day, Isaak and Jurg Yeliashkevych pay Tony Rush a visit. After tricking Tony into admitting that he spoke with the police, Isaak sticks a screwdriver into his right eye, killing him instantly.

Dexter and Debra are back at the dig site. She runs across the street to the Frosty Swirl for ice cream, while Wayne talks to Dexter about his time with Hannah McKay. Wayne regrets that he never got to patch things up with her. He says each day with Hannah was like Christmas Day, but she no longer cares about him and only thinks of him as a "killer." Wayne says she's not wrong, but he needs to kill "one last person." To Dexter's surprise, Wayne jumps in front of a tanker truck, spraying Dexter with his blood. Debra runs back, dropping the ice cream. Dexter construes that Wayne could not handle life in prison… and wonders if he could.

Hand is missing from evidence

Masuka grateful that Dexter won't report the hand is missing

Deb and Dexter talk outside the station

The Fox Hole is shut down again

Dexter describes his urge to kill

Video of Louis with a call girl

Nadia asks Quinn to pay for her car repairs

Dexter tells Deb that he resisted the temptation to kill

Dexter is sprayed with Wayne's blood 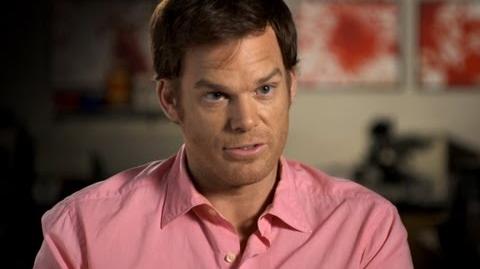 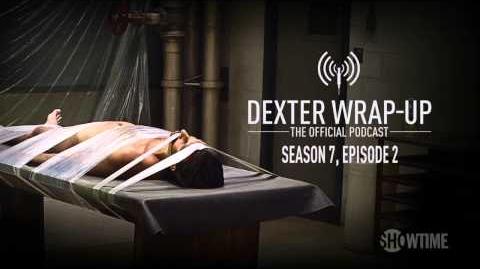 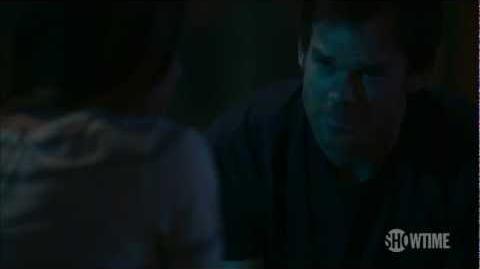 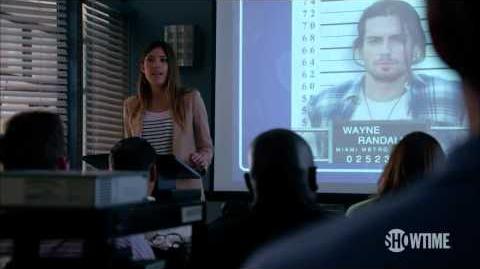