Talk to the Hand

Clyde Phillips
Talk to the Hand is the eleventh episode of Season Six of DEXTER, and the seventy-first overall episode of the series. It originally aired 11 December 2011 on Showtime.

Dexter finds that in order to catch The Doomsday Killer, he must create a macabre tableau of his own; Debra's battle with LaGuerta over the case of the dead call girl boils over, and her therapist makes an unnerving suggestion.

Deb and her team are on the yacht surveying Travis's handiwork with Holly and the Wormwood. They find Dorsey's body, as well. Dexter describes how he was killed.

Angel is tied-up over at the Dorsey's place and Travis tells him to start praying. Travis gives Beth a little pep talk and some final instructions for setting off the poison gas that she has in a backpack. She's going to use Angel's keycard to get past security and detonate a device at the station.

Deb calls Quinn because Angel never showed up at the crime scene. He tells her that he's headed to the Dorseys' place and Deb sends extra back-up. Deb and Dexter realize that Angel probably ran into Travis.

Beth walks into the station with a backpack. She is able to bypass security. She calls Travis, who says she must get to homicide and Lieutenant Morgan. An officer tells Beth that Deb is in the field and lets her wait.

Travis is ready to shoot Angel, but he asks for time to pray. Just prior to pulling the trigger, Travis hears Quinn's car pull up out front. Quinn breaks inside just in time to put out a fire set around Angel. Travis gets away.

Dexter realizes that if he hadn't called in his tip, Angel would probably be dead. Deb tells Dexter about Matthews and the call girl. He advises her to keep an open mind about the situation.

Dexter returns to the station and walks right past Beth. He starts doing some research on Dorsey.

Deb returns to the office and Maria informs her that Homeland Security is on its way. The officer tells Deb that a woman is waiting to see her and she mentioned Wormwood. Deb wants to see her immediately.

In his office, Dexter finds a picture of Dorsey and his wife online. He recognizes Beth and sees her walking towards Deb's office as she activates her backpack. Dexter shoves her into an interview room just as smoke starts pouring from the pack. Beth starts vomiting blood. Dexter seems to be experiencing some exposure.

Outside, a paramedic tells Dexter that he should be okay, but could experience side effects over the next few days. He says he needs to go to the hospital. Dexter tells Deb that "luck" was how he knew Beth was a threat. As Deb hugs Dexter, her therapist observes it from nearby.

To be safe, Dexter gets Jamie and Harrison a room at a hotel.

Dexter tells Harry that the next tableau is the "Lake of Fire." It refers to the Devil and a war against God. Dexter's nose begins to bleed.

Travis sees on TV that Beth was the only casualty of the Wormwood attack. He mutters to himself, "It's up to me now. My time has come, I must pass the test." He begins drawing on a wall of another home where he has killed a couple.

Deb goes to dinner with Matthews. She tells him what she knows and asks if he was there that night. She says that he can talk to her and he gives a sob story about being alone after his wife's death. He explains that the woman OD'd while he was in the bathroom and he tried to revive her. When she died, he left. He references their personal history and says he needs a favor. Deb's worried about what to tell the woman's father. Matthews replies that telling the entire story won't help anyone.

Agent Hubbard from Homeland Security temporarily takes over the investigation because of a potential terrorist threat. The team hates it.

Deb tells her therapist that Dexter is "all I have." The psychiatrist says that Deb's feelings for Dexter are "complex," and perhaps more than just brother-sister. Deb is furious at the insinuation. She insists that she's "not in love with my brother" and ends future sessions.

Dexter had stashed Gellar's hand in the morgue and he retrieves it to draw out Travis.

Louis is in his apartment drawing lines on the palm of the prosthetic hand. He then seals it in a box and addresses it to Dexter.

Dexter sets up his own tableau by using a statue outside the museum. He covers it with blood with a 666 on the forehead and attaches Gellar's hand. When the homicide team arrives, Masuka confirms that the hand is Gellar's and the cut was made post-mortem.

Travis learns about Dexter's tableau on TV. To lure Travis out, Dexter sends him a video message, stating, "The Beast is coming for you," while deliberating standing in front of his boat. Travis furiously paints over his huge mural, replacing the Devil's face with Dexter's face.

Matthews is waiting in Deb's office. He is being asked to retire and thinks she ratted him out. She has no idea what he's talking about and says she's done nothing wrong. He's still angry.

Deb tells Angel and Quinn they've just gotten the case back from Homeland Security and she needs them to step up their game.

Dexter is expecting Travis to come for him on his boat. He prepares a kill room on a nearby boat that's only used a few times a year.

Maria admits to Deb that she was the one who gave up Matthews. Deb is upset that Maria used her to further her career. Maria doesn't care, remarking that this is the way the game is played.

Deb tells Dexter about her predicament with Maria. They start to playfully joke about chopsticks which leads to Dexter kissing her on the mouth. Suddenly, Deb wakes up and we see it was a dream. She curses.

Travis arrives at Dexter's boat. As Dexter waits to grab him, his nose begins to bleed and he feels light-headed. Travis steals his hypodermic needle and jams it into Dexter's hand. Dexter wakes up on a life boat near his boat, surrounded by gas cans. Travis pours gas into the water and drops in a match. Flames head towards the tiny vessel as Travis speeds off and Dexter struggles to free himself. Travis looks back and sees the little boat explode. However, Dexter has freed himself just in time and swims out from underneath the fire.

Angel is held captive by Travis at Steve Dorsey's place

Couple murdered by Travis so he can hide in their house 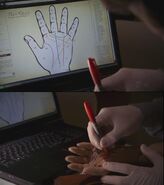 Dexter creates a tableau as a message to Travis

Debra has a dream in which she kisses Dexter

Travis tries to kill Dexter in The Lake of Fire tableau