Ricochet Rabbit is the tenth episode of Season Six of DEXTER and the seventieth overall episode of the series. It originally aired 4 December 2011 on Showtime.

Travis Marshall teams up with a fanatic couple to kill Holly Benson and release the Wormwood gas.

Dexter is putting everything together with respect to Travis and Gellar. Dexter looks at Gellar's body and he seems to have been killed by the same sword that was used in the earlier "Doomsday" murders. Travis looks down at Dexter in the basement and locks the trap door. Dexter watches through the bars in a window as Travis talks to a hallucination of Gellar. Travis hears Gellar say that he killed him several years ago because he didn't agree with Travis's strange ideas. Travis states he doesn't need Gellar anymore and he's going to make "new disciples."

In internal dialogue, Dexter tells Harry that Travis can't be saved. He finds the basement exit stairs and reads on his phone that the department is closing in on the IP address. He knows they will soon find the church. Dexter cuts off one of Gellar's hands and uses it to plant fingerprints around the church to make the cops think that Travis wasn't working alone. He then removes Gellar's corpse.

Dexter goes to Travis's hotel room and uses his laptop to post as Gellar on his blog: "I was wrong. This was all the Devil's errand. I'm sorry I misled you."

In a computer cafe, Travis reviews videos of supporters from the blog. He stops on one from a man named "Doomsday Adam." His real name is Steve Dorsey and Travis sends him a message that they should meet. Travis also responds to Dexter's post, writing to the "False Prophet" that "You're not fooling anyone."

The cops finally arrive at the church and realize that it's where everything happened. Deb seems to be bothered by the place and has to take a step out for some air.

Quinn wakes up in his car after yet another night of heavy drinking.

Dexter gets to the church and finds Deb outside. He thinks she's having a panic attack and helps talk her through it. Inside, Dexter looks for clues to help him find Travis. They see a painting of the next tableau, "The Wormwood" which is about poisoning mankind.

Deb receives a call from Chief Matthews, who wants to set up a dinner.

Dexter finds empty prescription bottles for Travis. On his phone, Dexter sees that Travis is talking to him on the blog. He refers to "fixing a mistake."

Louis tells Jamie that he wants to show Dexter his new video game. Jamie assures him that Dexter is a softie at heart.

Maria is trying to "help" Deb by leading the latest department briefing. Eventually, Deb asserts her will as her Captain falters, and effortlessly assumes control of the meeting. They talk about Holly and drinking blood. Dexter wonders if she is the mistake thatTravis wants to fix.

Travis visits Dorsey and his wife Beth and they are thrilled to meet him. He says their "time has come" and he needs to know that they are fully committed.

Dexter goes to Holly Benson's apartment and finds an address he thinks could be a boyfriend. The man's daughter tells Dexter that Holly could be on her father's yacht as he is out of the states. The daughter wants Dexter to give Holly the finger if he finds her.

Holly is on the yacht telling a friend over the phone that she's going to crash there. Travis, Steve, and Beth show up and grab her, calling her "Whore!" Travis then takes the boat out into open water.

Angel warns Quinn about the way he's been acting. He thinks he needs to suck it up and start acting like an adult.

Anderson brings over Travis's psychiatric file. He has a long and disturbing past, that includes breaks with reality and possibly murdering his parents.

Dexter learns from an online search the name of the yacht Holly is using and the marina.

Deb talks to her therapist, Michelle Ross, about her panic episode in the church. They think it might be because she associates churches with funerals and loss.

Travis coaxes Steve and Beth into helping him kill Holly.

Louis Greene shows Dexter his new video game, which allows users to play as their choice of notorious serial killers. Dexter very directly tells him that it's a terrible idea. Louis gets so upset he leaves, blowing off a date with Jamie.

Dexter gets access to security footage at the marina and sees that Travis took the boat out. He finds the yacht's GPS tracking info and uses it to learn its current location.

Deb uses her detective skills to figure out that Chief Matthews sent flowers to Jessica Morris on the day she died. She wants to talk about this development with Dexter, but he won't be in until later.

Louis gives Angel an address for Steve Dorsey, who has been posting strange videos on the blog.

Angel can't get Quinn on the phone so he goes to Dorsey's home alone.

Dexter sees someone on the yacht in a hazmat suit whom he assumes is Travis. There is a violent struggle and Dexter ends up stabbing the person in the chest. It turns out to be Dorsey who says, before he dies, "You're too late. Wormwood can't be stopped."

At the Dorsey house, Beth tells Angel the whole thing of Steve posting on the blog was a joke. But on his way out, Angel notices a shelf lined with Gellar's books. Just as he realizes they are disciples, Travis appears behind him and hits Angel over the head with a cross. Travis picks up Angel's badge and says, "Miami Metro Homicide: That's where God wants us to stage Wormwood."

Dexter finds Holly's body on the yacht's anchor under the water. Her throat was cut and she was stabbed. Harry advises him to call the police, but Dexter wants to fix the problem himself.

But when Dexter sees the materials used to make poison gas, he picks up the phone and anonymously reports the gas and the boat's location.

Travis argues with hallucination of Gellar 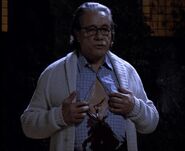 Holly hides out on the Ricochet Rabbit (yacht)

Travis knocks out and captures Angel

Holly's body hanging from an anchor