Clyde Phillips
Nebraska is the seventh of twelve episodes, and the sixty-seventh overall episode of the Showtime series DEXTER. It first aired 13 November 2011.

Dexter is caught up in a very personal case that once again awakens the needs of his Dark Passenger; Debra feels overwhelmed by her new Lieutenant duties, made all the more complicated when she finds out Quinn slept with a witness in the Doomsday case.

Dexter disposes of Nick's body as the darkness of his brother Brian takes the place of Harry's influence. "Brian" tells Dexter to embrace his Dark Passenger.

Dexter gets a call from Debra about an urgent matter. Back at the station, Debra tells Dexter that "The Trinity Killer" has killed again. The latest victims are his own wife, Sally, who was bludgeoned to death with a hockey stick and his daughter, Rebecca, who was killed in the bathtub. Jonah is the only survivor from the attack. Debra doesn't know that Dexter had killed "Trinity." To Dexter, Jonah seems to be the likely suspect. Dexter tells Debra that he needs some time off because it happened right after Brother Sam's death. She agrees to one day.

Travis Marshall informs his sister, Lisa Marshall, that he is taking a break from his job at the museum. Through a kitchen window, Travis notices Professor James Gellar outside Lisa's house. He opens the door and tells Gellar that he's "done" but Gellar orders Travis to finish carrying out God's work.

Dexter and "Brian" think that Jonah is following in his father's footsteps as a killer. Brian goads Dexter to drive the thirty hours to Kearney, Nebraska, and kill Jonah. When Dexter hesitates, Brian tells him that he has been domesticated and he needs to have fun. Dexter decides he will go. He asks Jamie Batista to stay at his place and take care of Harrison for several days. While on the road, Dexter calls Debra to inform her that he will need more than one day off. She isn't happy as she needs his help with the Doomsday Killer Case.

Maria LaGuerta embarrasses Debra during her presentation of ComStat figures. Debra confronts her in the elevator about it, and Maria says that, because she is now Captain, the figures reflect on her.

When Dexter stops at a convenience store, he notices a revolver behind the counter. He distracts the young clerk by flirting with her, and then having sex with her in a back room. While she is getting dressed afterward, he steals the gun on his way out. With "Brian" urging him on, Dexter laughs, drives faster, and shoots at road signs out of the car window until the gun is empty.

Dexter locates Jonah at his place of work, a hardware store. Jonah greets Dexter with, "Hello, Dexter Morgan." These are the same words said by Arthur Mitchell when he discovered Dexter's true identity. As they sit outside, Jonah tells Dexter that he saw his father kill his mother. Dexter knows this a lie since he had killed Arthur. Jonah tells Dexter to go back to Miami because it's over. Brian, though, says the fun is just beginning.

Debra and Angel interview Holly Benson, the woman set free by Travis. Holly tearfully says that she was blindfolded, forced to drink blood, and called "The Whore." She thinks there were two men but she didn't see either of them.

Dexter pays cash to an inquisitive guy, Norm, for a motel room at the Shady Lane Motel. Norm notices Dexter's Florida plates and questions him on why he is in the area. Dexter makes up a story about being a landscaper and following the Oregon Trail. He asks Norm where he can get a flat tire fixed and Norm offers to plug it for twenty dollars. When Norm mentions that Dexter has soft hands for a landscaper, Dexter smirks and claims that he wears gloves.

As Dexter takes a shortcut through a cornfield while walking into town, he finds a small pot farm. Norm, who is watching Dexter from afar, realizes that Dexter discovered his secret.

Back at the church, Gellar is ripping entrails from an alligator.

Debra's team discusses the next likely tableau - The Angel of Death. They decide that Gellar's accomplice is likely one of his former students. Debra is furious that Dexter hasn't returned to work yet. Louis offers to use his software to narrow the list of possible suspects.

Louis shows Jamie a video game that he is creating based on police cases. An upset Debra drops by, and asks Jamie where Dexter went on his trip. Jamie doesn't know but guesses the Keys. Because Dexter won't answer her calls, Debra tries calling from his home number. Dexter picks up, thinking it's Jamie calling about Harrison. He doesn't give Debra any information and hangs up. He decides to deal with Jonah right away.

Norm finishes the tire and Dexter drives to Jonah's house. Dexter is still not sure if Jonah's guilty, which disgusts Brian. When Dexter opens his trunk, his knives and forensic kit are missing and he knows that Norm stole them. Jonah's house is unlocked and Dexter enters to look around. While running a test for bleach, Jonah arrives home. He is very angry that Dexter is there and orders him to get out or he will call the police. Dexter states that Trinity was never in the house because he killed him. Jonah runs out of the house and takes off in his car as a neighbor watches.

Dexter returns to the motel to take back his knives from Norm whom he finds in a shed. Norm thinks that Dexter works for the DEA, ATF, or FBI and wants to arrest him for selling pot. Believing that Dexter has money, Norm tries to extort $10,000 for the knives. Dexter refuses and attempts to grab them. Norm pulls out the gun he took from Dexter's car and threatens to kill Dexter. However, Dexter knows the gun is unloaded, having shot all the bullets, and he quickly impales Norm with a pitchfork. "Brian" tries to convince Dexter that it doesn't matter if you kill an innocent person. Dexter seems to like the idea of continuing to kill, unrestrained by the Code of Harry. With no ocean nearby, Dexter disposes of Norm's body in a grain silo.

Travis returns Gellar's things to him, and states again that he is done. Gellar lists the sins that people commit, but Travis insists that he wants to be free. Gellar replies, "Talk to God. I release you."

Quinn apologizes to Deb for proposing marriage. He said he thought it was "something people did after awhile." He kisses her on the cheek, but Debra reminds him that it is over.

Jonah calls Dexter and arranges a private meeting in his hardware store. Jonah immediately attacks Dexter, but he is quickly subdued. With a knife to his throat, Jonah asks Dexter to kill him, which puzzles Dexter. Jonah reveals that his sister committed suicide due to abuse by their mother, who kept blaming them for Arthur's actions. Showing remorse, Jonah says that when he found his sister dead, he exploded with anger and killed his mother.

Despite "Brian" egging him on to kill Jonah, Dexter realizes that Jonah has a conscious and lets him live. Dexter pushes past Brian, gets into his car, and tells an upset Jonah to forgive himself. Dexter then runs his car into Brian, which causes Brian's darkness to dissipate. As Dexter nears Miami, he stops to pick up Harry, who is standing by a road, indicating that he is again following the Code.

Dexter on road trip to Nebraska

Dexter has sex with Laci and steals a gun

Dexter fires at targets out of car window

Holly Benson is questioned while in hospital

Dexter stumbles upon a pot farm 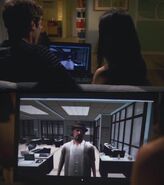 Norm tries to extort money from Dexter for his knives

Dexter after he kills Norm with a pitchfork