Episode 603: Smokey and the Bandit

Smokey and the Bandit

Clyde Phillips
Smokey and the Bandit is the third episode of Season Six of DEXTER and the sixty-third overall episode of the series. It first aired 16 October 2011 on Showtime.

The estimated number of viewers for the episode during its original airing was 1.50 million.

Dexter Morgan targets Walter Kenney, a 70-something serial killer living in a local retirement village, referred to as "The Tooth Fairy" in the 80s, when his killings took place. This causes Dexter to confront a sobering glimpse of his own potential future.

Debra is uncomfortable in her new job as Lieutenant; Travis Marshall prepares a new twisted tableau, ensuring Debra's next task will be a daunting one.

As Dexter prepares breakfast, Harrison plays with a toy horse. Debra asks Dexter his opinion on what clothes to wear since it is her first day as Lieutenant. As they talk, she and Dexter get a text about a homicide at 930 Euclid (ten minutes from Dexter's Apartment).

Nathan Roberts, the jogger that Travis Marshall abducted, is chained to the floor of Santa Maria de Loreto, a church. Travis tells him that he must repent to God and Nathan shows his terror.

Dexter arrives at the crime scene to find a prostitute who was strangled and beaten, and has a chipped tooth. Joey Quinn is dropped off late by a blonde woman and Angel Batista starts to berate him for cheating on Debra until Quinn reveals that he and Debra broke up.

Debra looks through files to find a replacement for herself as Detective. Maria LaGuerta butts in and pushes her to choose Sam Harmon from Narcotics. Debra almost lets Maria make the decision until Angel calls her and tells her to stand her ground.

Dexter looks through an old scrapbook that he kept when he first started tracking serial killers. In his youth, he admired The Tooth Fairy Killer, who was known for murdering prostitutes in Oregon and removing a specific tooth (lateral incisor). Since the prostitute found that day had the exact same tooth cracked, he wonders if it is The Tooth Fairy even though he’d be about 70 years old now.

Dexter stops by the Coral Island Retirement Village, since it is located near the crime scene. He pretends to be looking for a place to bring his father and asks about residents from Oregon. He sneaks a look at the receptionist’s computer and sees one possibility -- Walter Kenney, a five year resident at the home.

Vince Masuka, who is attracted to his intern, Ryan Chambers, shows her evidence from the Ice Truck Killer Case. She's particularly interested in Monique's prosthetic hand.

During Debra's first briefing, it’s disclosed that the dead prostitute, Rosalia Davalos, had trace amounts of cocaine in her system. Dexter secretly hopes to connect her murder to the Tooth Fairy. Quinn and Debra argue about releasing information to the public about the snakes. LaGuerta sides with Quinn and takes over the Debra's briefing.

Meanwhile, Nathan apologizes to God and Travis seems satisfied. However, Professor James Gellar tells him that the jogger is insincere. Gellar says that Nathan is only saying what Travis wants to hear, and Nathan must be “pure” in order to proceed.

Dexter introduces himself to Kenney and together they play golf. During a swing, Kenney hurts his back and asks Dexter to take him to the club bar. Dexter asks a few questions and Kenney answers that he was a pipe fitter for 25 years in Oregon. As Kenney stares at the waitress, Dexter notices a dental implant for his lateral incisor. When Dexter leaves to pick up his car from Good Shepherd Auto Repair, Kenney asks Dexter to return the next day to give him a ride.

Brother Sam invites Dexter to a company party at a Biscayne Bay beach on Sunday, explaining that it’s a baptism for Nick. He says that since Dexter helped save Nick from the Locos, he should join them and bring his son.

Debra is freaking out about having too much on her plate. Dexter reminds her that she's new to the job. They talks about her breakup with Quinn, and Debra says that she doesn’t regret it.

When Dexter researches Kenney, he finds that his mother was arrested for child abuse.

In front of Debra, Quinn tries to hit on Ryan but she shoots him down. Debra then takes Quinn into her office and asks how he's doing after their breakup. Quinn is bitter and accuses Debra of choosing her promotion over their relationship.

Nathan briefly escapes and is startled when he runs into a living horse inside the church. Travis asks Nathan to make a choice, and Nathan falls at Travis's feet and begs for forgiveness.

Dexter waits until Kenney boards a bus for home and breaks into his storage unit. Once inside, he finds a box filled with teeth, confirming that Kenney is The Tooth Fairy Killer. Later, Kenney calls Dexter, claiming that he is stranded and doesn't know where he is. Dexter picks Kenney up but, suddenly, Kenney pulls a gun on him. He tells Dexter that he ran his plate and found out that Dexter works for Homicide. Knowing that Kenney plans to kill him, Dexter intentionally crashes his car into a chain link fence which activates the air bags.

Masuka awkwardly asks Ryan on a date and, to his surprise, she accepts.

Debra informs LaGuerta that she's going with her gut and is choosing Mike Anderson to replace her as detective. LaGuerta is not happy that Debra is going against her wishes and issues a threat that she won’t have her back if it goes sideways.

When Mike Anderson reports to the station, he is initially is dismissive of Debra when she greets him. He assumes that Debra is kidding about being the Lieutenant as part of a hazing ritual. With LaGuerta watching, Debra professionally and forcefully sets him straight, and he apologizes for his attitude.

Dexter secures Kenney in his recliner inside Kenney's room. Before Dexter kills him, he takes a blood slide. Kenney, now aware that Dexter is a serial killer, warns him that he will end up the same way and that, when he gets too old to kill, he'll be miserable. When Kenney reveals that he wants his son to know that he is the Tooth Fairy Killer, Dexter chooses to smother him with a pillow to make it look like a heart attack. Dexter then disposes of Kenney's teeth trophies in the ocean.

Still in love with Debra, Quinn engages in disinterested sex with another woman. Ryan steals the Ice Truck Killer victim's prosthetic hand from evidence before going on the date with Masuka. When putting Kenney's blood slide away, Dexter drops the entire box. He now has no idea which slide goes with which victim, saying there's no order, anymore.

Four horses are sent trotting down a busy street. Each rider has been created from a combination of Nathan’s body parts and a mannequin.

Dexter's scrapbook from his youth 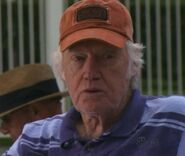 Dexter finds a box of teeth in Walter's storage unit

Walter waiting for Dexter to pick him up

Dismembered Nathan atop a horse
Español
Community content is available under CC-BY-SA unless otherwise noted.
Advertisement