Clyde Phillips
The Big One is the twelfth and final episode of Season Five of DEXTER, and the sixtieth overall episode of the series. It first aired 12 December 2010 on Showtime.

Dexter's situation grows desperate when he discovers that Lumen has been set up and captured by Jordan Chase. With the murder of Stan Liddy, an investigation marks Detective Joey Quinn as the prime suspect. Debra Morgan deduces Jordan Chase's real identity and gets a tip on where to find him.

Despite knowing that he's being baited into a trap, Dexter risks his life to save Lumen. In the Barrel Girls case, Debra comes to the conclusion that the disappearance of the rapists is due to a pair of vigilantes. Stan Liddy's body, having been stabbed by Dexter, is found and the team is called to the scene. At Liddy's crime scene, LaGuerta informs Quinn that the last five calls found on Liddy's phone were to him. LaGuerta then notices blood on Quinn's boots (belonging to Liddy), and has him taken in for questioning.

Dexter tracks down the address of one of Chase's camps where Lumen was first assaulted. Dexter speeds to the scene (in a car stolen from the area surrounding Liddy's crime scene) but in his haste, his car flips over a backhoe on the road. Following his crash, Jordan locates Dexter and ties him up alongside Lumen. As Jordan opens Dexter's knife kit, he notices one knife is missing, which Dexter uses to break free and stab Jordan in the foot. Dexter incapacitates Jordan and frees Lumen, before they then strap Jordan to a table. Jordan taunts Lumen about the rape, and she kills him by stabbing him in the chest.

Meanwhile, Debra has tracked down the street vendor, who reported seeing Jordan heading in the direction of a camp. She walks in just as Dexter and Lumen are cleaning the crime scene behind plastic wrapping, which conceals their identities. She tells the two that she knows who they are and advises them to be gone within an hour to avoid the police, and she leaves without seeing them.

The morning after disposing of Jordan's body, Dexter proceeds to the lab to perform the blood-work on Quinn's boot.

When he returns, Lumen informs Dexter that she wants to leave, stating that her need to kill has now gone. Dexter laments her leaving and throws a pair of plates at the wall in anger, realizing he may be forever broken. Though distressed Dexter begins to understand, and assures her that she should not be sorry that her darkness has left her. He then promises that he will carry her darkness for her, along with his own.

After saying goodbye to Lumen, Dexter attends Harrison's first birthday party with his family and co-workers, visibly distraught by Lumen's departure. Quinn attends with Debra and thanks Dexter for the blood-work which had exonerated him from the Liddy murder case. Dexter tells Debra that he still dislikes Quinn but accepts that he makes Debra happy.

As the episode concludes, Dexter questions how those around him can make relationships seem so easy. He removes his wedding ring for the first time and reflects on what Lumen brought into his life, that someone could see him for who he is and not see a monster, and that nothing, not even darkness, is set in stone. He then blows out Harrison's candle on his birthday cake, stating that "Wishes, of course, are for children." 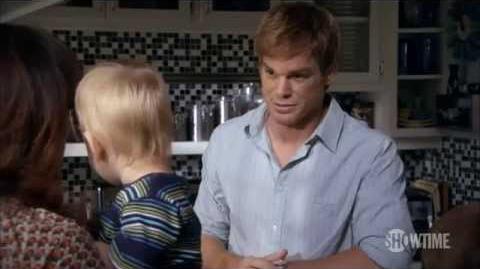 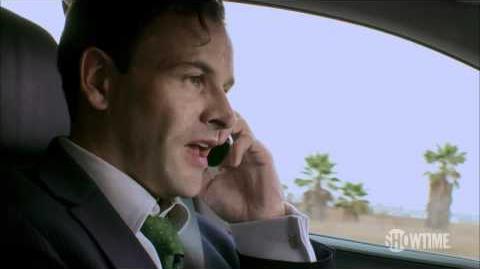 Dexter flips his car and is captured by Jordan