Clyde Phillips
"Hop a Freighter" is the eleventh episode of the fifth season of Dexter, and the 59th overall episode of the series. It first aired 5 December 2010 on Showtime.

Dexter and Lumen's plans are momentarily thwarted when they come under scrutiny.

Deb and Quinn arrive to thank Jordan Chase about his tip about Tilden. They mention that he has disappeared like the others and Deb points out that the only connect they seem to have is Chase himself. Chase is outraged at the notion, saying that he was cleared by DNA. Chase tries to psychoanalyze Deb while she warns him that he is likely next.

Dexter and Lumen try to plan Chase's murder, but there is too much security. Lumen suggests they lure him out using her as bait. Dexter says no because too many people might be watching including his sister. Lumen asks if she has ever suspected anything about what he does, but Dexter concludes that she may have a blind spot for him. He decides it is for the best because she is not like them. As they kiss, Dexter notices out the corner of his eye surveillance footage of himself and Lumen on a baby monitor in front of him. he knows he is being watched at tells Lumen. He spots many vans in the area and decides the perpetrator could be anywhere.

Deb and Quinn come back to the station where Liddy is waiting outside for Quinn. He tells Quinn he needs his help on a bust on Dexter to get his job back. Quinn tells him no and Liddy calls him a wimp and leaves.

Dexter and Lumen keep an eye on the baby monitor, which is still picking up the surveillance cameras. Dexter also finds a recording device in a lamp and he tells Lumen that it is someone at his department watching them. Lumen asks how they could be onto them, but Dexter says that they must not have much to go on since they haven't been arrested yet. Lumen says that it can't end this way. Dexter says that it isn't going to.

Dexter gets a call from Sonya about Harrison's birthday party and tells her that they should have the party in Orlando. It would be safer.

At the station, Deb calls Dexter in and continues telling everyone information about the Barrel Girls Case. Masuka has found a second print to match the partial found outside of the house next to Tilden's home. Inside the house, they also found that the dining room had been recently cleaned with bleach and suggests that the vigilante likely killed Tilden there. When LaGuerta asks, Deb explains that her vigilante theory and that she may have had help.

Dexter uses the computer to find that Quinn's name was attached to the surveillance equipment under a false case number, but also that since no court order was given for surveillance of his home it must be off the books. He decides that Quinn must be doing this on his own. He and Lumen break into Quinn's apartment and look for any information, finding photos of himself and Lumen disposing of Harmon's body.

At Dan's Dentist office, Deb and Quinn ask Dan's wife a few questions. She mentions his "man time" fishing trips. The officers tell her of the new information linking him to the Barrel Girls case and asks if she knows any of the suspects. Only Jordan Chase's name is recognized and she points to a small trophy on the desk with her husband's name and the name Eugene Greer. She explains that Jordan Chase is Eugene Greer and that Dan and Jordan were childhood friends.

Deb and Quinn investigate further. Batista informs them that Chase and Tilden were connected as well, while Dexter overhears and concludes that he needs to act fast. He asks Deb if she and Quinn want to join him for Harrison's birthday. She says that Quinn probably shouldn't go and tells Dexter about their fight. Deb says that she didn't tell Dexter because he had been through enough. She tells him about the boot print and says that whoever the vigilante has helping her must love her and be willing to do anything for her.

Lumen and Dexter are at a kiosk buying a pocketknife for Lumen's protection. They talk about the surveillance again and Dexter tells her that he wants her to leave Miami until its safe. Lumen refuses.

Quinn, Batista, and Deb discuss Chase's transformation from Eugene Greer. They find more connections, seeing that they must have been hurting girls for years. Quinn tries to make up with Deb, telling her again that he loves her. He tells her that she is more like a guy, the first woman to "ever call me on my bullshit." Batista tells Quinn and Deb that Chase will be untouchable soon unless they can find cause to keep him there.

Dexter looks for the van again, thinking he has found Quinn and goes to tranquilize him, but Liddy comes from behind with a taser and drives away with him in the van.

Emily Birch, the first victim of the Barrel Girl Gang, calls Lumen to come to her house. Chase congratulates Birch on her acting. Lumen leaves Dexter a voicemail message telling him where she's going.

Stan Liddy continues his drive with Dexter tied up in the back of the van. Liddy calls Quinn and tells him to meet him at the fuel docks to help him with his bust. Quinn reluctantly goes. Dexter notes that it sounded like Quinn didn't want to come. Sonya texts Dexter about the party and Liddy answers for him. Liddy then shows him the surveillance tapes.

Liddy tries to get Dexter to confess and after a struggle, Dexter slowly stabs Liddy in the chest, killing him. Quinn shows up afterwards, but remains oblivious to what happened. He calls Liddy and leaves a short message and leaves just as a drop of Liddy's blood falls on his shoe. Dexter listens to his voicemail and hears Lumen's message about Emily. He tosses the video surveillance into the water and takes the rest of the recording equipment with him.

Deb is told by LaGuerta that her request to detain Chase has been denied since Deb did not ask her. Deb said that she didn't tell her because LaGuerta never supports her. Deb is about to storm out until LaGuerta hands her a different court order signed by a judge that owed her a favor.

Dexter tries to find Lumen to no avail at his apartment.

Emily tries to help Chase, but he is angry and tells her that it is her fault. After a disagreement about whether to kill Lumen or not, he knocks Lumen and then Emily onto the floor. As Lumen watches, he beats Emily to death with a poker.

Deb arrives at the airport with a deputy, only to find Chase not there.

Dexter realizes what happened in a visit to Emily's house. He concludes that Lumen put up a fight, and leaves to find her and Chase. 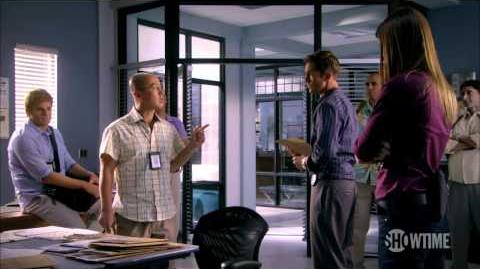 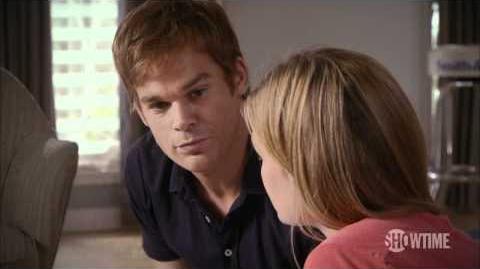 Add a photo to this gallery
Retrieved from "https://dexter.fandom.com/wiki/Episode_511:_Hop_a_Freighter?oldid=119000"
Community content is available under CC-BY-SA unless otherwise noted.