Episode 510: In the Beginning

Clyde Phillips
"In the Beginning" is the tenth of twelve episodes in Season Five of DEXTER, and the fifty-eighth overall episode of the series. It first aired 28 November 2010 on Showtime.

Dexter discovers a possible ally in the pursuit of Lumen's former captors, but he and Lumen are forced to step down when homicide uncovers evidence linked to one of their prior victims; Lumen kills for the first time.

Dexter is carrying Harrison, thinking about how history repeats itself which is why he has to get Harrison out of Miami and Lumen out of his house to protect her from Jordan Chase. Sonya is put in charge of taking Harrison to his grandparents' house in Orlando and he sends them off.

Dexter brings Lumen to his apartment, unaware that Stan Liddy is secretly watching. Lumen says that Chase needs to be taken out now, but Dexter says that it will be difficult now that he knows about them. He shows her the picture of Emily Birch, whose blood was in Chase's vial. Lumen notes that she looks like her and the other girls in the barrels, only older. Dexter says Emily might be the first victim and they will go talk to her later. He leaves for work, telling Lumen to stay inside and don't open the door.

Deb is back from her suspension in the file room. LaGuerta is presenting the reopened Barrel Girls Case, mentioning that new evidence has been discovered. Masuka explains that DNA reports from the coroner's office point to multiple perps. Boyd Fowler and Cole Harmon's photos are on the whiteboard. LaGuerta tells Deb and Quinn to bring in Harmon and she'll soon have a search warrant for his house.

LaGuerta and Batista are still emotionally distant toward each other.

Deb and Quinn go to Chase's office looking for Cole Harmon, but Chase says he has been missing for a couple of weeks. Chase denies knowing where Harmon is, but his anger escalates as Deb pressures him. He suggests that they talk to his attorney from now on. Quinn tells Deb that she was a bit harsh, but he is on her side. They go to Harmon's house, hoping the warrant has been issued.

Dexter and Lumen arrive at Emily's house which has high fences and barred windows. They ask Emily about Jordan, but she denies knowing him. Then they show her the group photo they found in Cole's house. She also denies knowing the five guys in the photo and closes the door on them. Dexter and Lumen think Emily is lying.

Dexter goes to meet Deb at Harmon's house, where Deb points out a smear of blood on the wall. Dexter realizes that it's from where Lumen hit Harmon. Quinn brings to their attention thirteen DVDs of Harmon's rapes and tortures. Dexter figures that Lumen is likely the 13th victim.

At the station, Deb rushes the blood work while Masuka puts up photos of the victims on the DVDs on a whiteboard. So far, he has yet to see disc 13. Dexter goes to his office and scratches a blank DVD and writes a '13' on it to switch it out with the real one. Masuka stops him at the door because Deb has ordered him to follow chain of custody and guard the evidence. Dexter still manages to switch them after purposely knocking over the DVDs.

He returns home to Lumen, who has been trying to find info on Emily. Dexter brings her the DVD of her rape and torture. Lumen asks if anyone watched it and Dexter says that he only watched enough to make sure it was the right one. Lumen cries, but is grateful that he was willing to risk everything to help her. Dexter says that they "both met each other at the right time." Later, Lumen watches her DVD, while Dexter listens from his bedroom.

The next day, Deb talks about how hard it is to watch the DVDs and Dexter tells her that people may be stronger than she thinks, secretly referring to Lumen. Deb, though, tells him he wrong on this. She mentions the 13th disc being too scratched to watch, but is glad to not have to watch another one. She has discovered a connection using the DVDs: Harmon is friends with Dan Mendell, who was previously found dead, and Mendell's ring appears in a DVD. Deb concludes that they were likely part of a club that raped and tortured women. Deb also notes that these men are missing or dead, so someone may be hunting them.

Lumen goes to see Emily Birch again, this time alone, and shows her footage from her DVD. She asks if this is what happened to her. Emily tells Lumen that twenty years ago, she was a counselor in training at a summer camp. She friended a group of five young guys, including Jordan Chase (then called Eugene Greer). One day, Chase drugged her and she woke up in a cabin, naked and tied to a bunk. Chase never touched her, but riled up the others to do things to her. Afterwards, they forced her to take the photo. Lumen asks about the last member and Emily names him as Alex Tilden.

Liddy arrives at the station and speaks to Dexter. When Liddy asks if he likes working with blood, Dexter says he likes catching bad guys. Lumen calls Dexter and as soon as he leaves, Liddy forges Quinn's signature to get recording equipment from the police department.

Lumen meets Dexter and tells him about Emily Birch's confession about the five guys in the photo but she won't give him the last name unless he agrees to let her kill him. He warns that it will change her, but she says that she is already changed.

Quinn and Deb introduce themselves to Alex Tilden at his desk in a bank, They tell Tilden that his name appeared as a connection to Harmon. Tilden admits knowing Harmon, saying they are in a fantasy football league together. However, he denies knowing Fowler, Mendell, and Chase and nervously watches the detectives leave. On their way out, Deb mocks Quinn for his lax attitude with Tilden.

Dexter gives Lumen a gift for her first killing: a pair of black gloves. They are unaware that Liddy is listening to them from a van using the equipment from the station. At Tilden's house, Dexter and Lumen look for evidence that he was involved. They find a gun and a box of jewelry, which includes a necklace that Lumen recognizes as her own. Dexter allows her to take it. Together, they choose a kill room.

Emily Birch is talking to Chase at her house and it's revealed that he wanted her to tell Lumen the truth about everything. She asks if he is in trouble, but he only says that Lumen is "making waves." Chase tells Emily that no one could ever take her place, that she is special to him, and she made him what he is. However, he won't allow her to touch him, and Emily appears hurt.

Chase introduces his lawyer to Deb and Quinn. The police have requested DNA to compare to the unidentified DNA on the girls. The lawyer tries to get him out of it, but Chase agrees to give a buccal swab taken by Dexter. Chase goes into Dexter's office and accuses Lumen of being toxic and dangerous on a self-destructive path. Dexter tells him that soon he will be cleared by DNA which will allow him and Lumen to take him out.

Lumen and Dexter prepare to get Tilden with Dexter surprises by her "kill outfit" which is similar to his own. Lumen practices her stab as Dexter observes her, only telling her to be careful. Liddy continues to listen and watch as they plan the murder.

Tilden talks to Chase, wondering if he should leave town. But Chase tells him that he has taken care of the situation and to act like everything is normal. Tilden agrees and is told to go home. Meanwhile, Chase is sitting in a car outside of Tilden's home, waiting for Dexter and Lumen to arrive, which they do. He phones Deb and tells her that Alex Tilden called his office looking for Cole Harmon about a flight. Deb thanks him and she and Quinn leave for Tilden's house.

When Tilden arrives home, he is greeted to Lumen's DVD footage as she appears in front of him. He runs for his gun, but Dexter injects him with M99 and they take him to the kill room. Dexter collects a blood slide and Tilden asks for Lumen's name. Instead, Dexter shows him the pictures of the other victims. Meanwhile, Deb and Quinn have arrived at Tilden's house and find the door unlocked. They go inside but find nothing.

Dexter and Lumen are in the empty house next door, where they set up the kill room. Tilden puts the blame on Chase and denies wanting to hurt Lumen or the other girls. He tries bargaining for his life, asking for a number to pay them off. Lumen leans close and whispers, "13." Dexter immediately gags Tilden and hands a knife to Lumen. He watches as she stabs Tilden in the heart.

Outside, Deb finds a small partial footprint, noting that a woman was likely just there. She wonders if the thirteenth victim escaped and has been taking out the men as revenge.

Dexter and Lumen return home and Lumen kisses him, which leads to sex. Afterward, Dexter thinks to himself that in her eyes, he is not a monster.

Dexter sends Harrison to Orlando with Sonya to keep him safe

Dexter lets Lumen stay in his apartment to hide from Jordan

Liddy spies on Dexter and Lumen from the pool house

Jordan confronted by Deb and Quinn

Jordan says talk to his attorney

Dexter is called to Cole's house

Masuka in charge of DVDs

Lumen watches herself being raped

Dexter listens to screams from the DVD

Ring seen on the hand of a rapist in the DVDs

Debra discusses the case with Dexter

Emily reveals her past

Lumen wants to kill Tilden herself

Deb and Quinn question Tilden at the bank where he works

Liddy surveils Dexter and Lumen from a van

Jordan tells Emily that they have a special bond, but he won't let her touch him

Jordan arrives at station with attorney and bodyguards

Dexter waves to Jordan from his office

Dexter collects Jordan's DNA while they subtly threaten each other

Tilden shocked to find Lumen in his house

Lumen standing in front of her rape footage

Quinn and Debra arrive at Tilden's house, but it's empty

Tilden in kill room in house next door 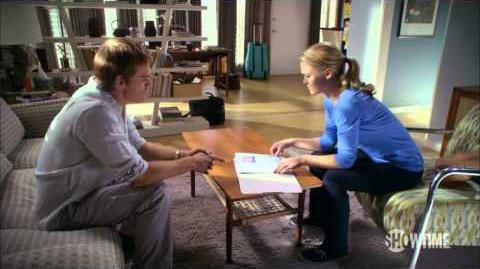 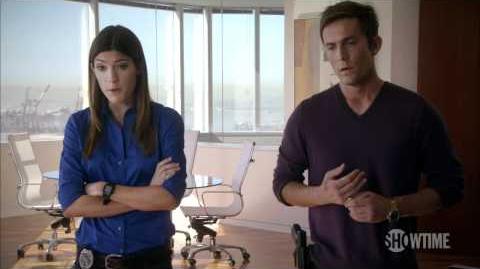