Clyde Phillips
Teenage Wasteland is the ninth of twelve episodes in Season Five of DEXTER and the fifty-seventh overall episode of the series. It first aired 21 November 2010 on Showtime.

In the midst of hunting their next victim, Dexter and Lumen are surprised by the return of an unannounced guest; Debra is assigned to the file room, but manages to uncover new evidence in the Barrel Girls Case.

Dexter is running on a treadmill, working out with Jordan Chase. Chase tells him that exercise helps bring out feelings, a way to bring out the real him. Dexter and Chase discuss how trauma means getting the opportunity to put yourself together anyway you want. He knows from experience and reveals that he stole it from Plato's symposium, his inspiration for "Take It!". In Jordan's locker, Dexter sees a chain with a rectangular vial hanging from it with what looks like blood inside. On his way out, Dexter sets up an appointment with Chase's receptionist for the following day and notices the increase in security.

He calls Lumen about the vial and she suddenly sees a shadow at the kitchen door. The knob rattles and she tells Dexter that someone is trying to break in. The door also rattles at the front. Lumen grabs a knife and whispers to Dexter that they are inside and coming towards her. He tells her to keep the line open and she hides in the bathroom. However, It is only Astor and a friend of hers, Olivia, thinking the house was empty. They had taken a bus from Orlando after stealing alcohol from Olivia's house.

Astor thinks that Lumen is Dexter's girlfriend, and is not happy about it. She begs Dexter not to call her grandparents before going off to sleep. Thoughts of Harry prod Dexter to get Astor out of there, but Dexter doesn't want to just turn her away. He wants to make things right and be a good father.

Deb and Quinn discuss her meeting with a union representative. Deb thinks she will be fired, but Quinn tells her everything will be okay because she has so many people backing her, and he loves her. She asks why he dropped just then that he loves her, but he brushes it off as "just an expression." As Deb leaves for the meeting, Quinn tells her to forget he said it. Liddy calls Quinn and informs him about the pictures he took of Lumen and Dexter dumping bags into the ocean Quinn is in a bad mood, though, and angrily tells him that he will call him later. Liddy, who is in a photo shop, pretends to shoot a young boy.

Dexter asks Lumen's advice on teenage girls. Lumen tells him to talk to her, to share something with her that he did at her age. He knows that's not a good idea. Lumen tells him to cut Astor some slack and that the hangover will be punishment enough. Astor comes to the table and Dexter tells her that he wants to spend the day with her to talk. She agrees as long as Harrison can come, too. Just then, Harrison calls Lumen "Mama" to everyone's surprise and Astor tells him, "She's not your mama. Your mama's dead." Astor is angry with Dexter now. Olivia remarks that her family is weird, too.

Deb has been assigned to the file room, and she's still angry about being blamed for the incident at the club. Angel tells Deb that his report backed her story, but the higher-ups backed Maria. After Deb joins Francis in the file room, she tells her that Quinn said he loved her but she didn't say it back because she might feel the same.

Dexter is with Chase, having just ended another exercise regimen. Chase tells Dexter that although he seems more "open, he doesn't think Dexter is being completely honest with him. While Chase showers, Dexter quickly makes a blood slide from the contents in Chase's vial. When Chase returns, Dexter leaves but Chase notices his locker slightly disturbed and finds a drop of blood. He knows that Dexter has been spying.

Deb has been reading files and finds that there should be multiple suspects for the Barrel Girls Case. She tells Masuka and Batista and points out that Cole Harmon should not have been excluded from the suspect list. Batista decides to tell LaGuerta to reopen the case.

Dexter arrives at the lab with the blood sample. Masuka is there and asks about the blood slide. Dexter lies and says that it was supposed to be filed a long time ago. He receives a frantic call from Lumen telling him that Astor and Olivia are gone, but Astor's cell phone was still there, asking what teenage girl leaves her cell phone behind.

Dexter leaves work for home and sees Lumen speaking with the next door neighbor. He saw the van and part of the license plate number, but did not stop them because he did not know there were any tenants at Dexter's house.

Dexter calls and reports the van to the police. At the department, everyone rallies around Dexter and is questioned as to where he was when Astor was taken. He admits that he was with Jordan Chase at the time they were taken. Deb warns that Chase hangs with some disreputable people. LaGuerta asks who she is referring to, and Batista tells her that the Barrel Girls Case may have been closed prematurely.

The police find a man at a gas station with a matching description to the neighbor's information. He's Barry Kurt, the boyfriend of Olivia's mother, who followed Olivia by tracing her phone. The girls are found at Bayside Mall being held for shoplifting. Dexter, Deb, and Barry bail the girls out. Olivia doesn't want to leave with Barry and Dexter volunteers to take the girls to his house to get their stuff.

Dexter brings everyone back to his house, where Lumen is waiting. He uncomfortably introduces Lumen to Deb as his tenant. Lumen leaves to check on the girls while Dexter denies having a personal relationship with Lumen. After Deb leaves, Dexter calls for Astor, asking what is going on with her drinking and shoplifting. He tells her that she is following a bad path but she is uncooperative. Astor turns things back on him, asking about Lumen again. Dexter tells her that they will sit there until she is ready to talk.

Lumen notices bruises on Olivia's stomach, which Olivia tries to shrug off as nothing. Lumen tells Dexter and Astor reveals that she knew and asks Dexter not to be mad. Astor makes Dexter promise not to say anything so that Barry won't hit Olivia anymore. She goes on to say that Barry only hits her in places that don't show. Astor says she didn't tell him because she thought he wouldn't care. Dexter promises that he will take care of it.

Batista tells Deb that LaGuerta won't reopen the case and Deb bursts into her office to confront her. LaGuerta listens as Deb accuses her of many selfish things. LaGuerta says that she made the case go away and mentions that she suspended Quinn to protect Dexter. Deb asks Quinn to explain why he lied about being on vacation when he was really on suspension. Quinn admits to it and explains what happened. He says the composite sketches pointed to Dexter, but that it didn't pan out. Deb angrily leaves him as Quinn ignores another call from Liddy.

Barry meets Dexter outside near a store that night and Dexter brings up Olivia's bruises. Barry denies knowledge of them and Dexter volunteers to show him. Dexter continues to hit him and threatens him, ordering him to leave Olivia's mother or he "won't go so easy next time." Dexter imagines Harry admonishing him, but then thinks he would be proud of him for protecting Astor. He imagines Harry admitting that he underestimated Dexter, seeing him as a monster and, if he had seen that side of him, he might have led Dexter down a different path.

Liddy is waiting at Quinn's apartment and shows Quinn the photos of Dexter and Lumen. Quinn, though, pays Liddy off and tells him he is done. However, Liddy says that this evidence is too big to ignore and suggests he will be taking the info to Deb. Quinn gets angry and orders Liddy to stay away from him and his girlfriend. Liddy only smiles and leaves the apartment.

LaGuerta reopens the case as she promised, but Batista tells her they still have a long way to go before they can share a bed again.

Quinn tries to get Deb to forgive him. He repeats that he loves her and says he doesn't take it back. When Quinn tells Deb that he would never hurt her, she angrily replies that he has hurt her by "spreading shit" about her brother.

Dexter drives the Astor and her friend home to Orlando, and Olivia is happy because her mother said Barry is officially gone. Olivia's mother greets her with a hug. In the car, Astor asks Dexter if he will tell her grandparents about the drinking and shoplifting, but he says that it is up to her because "we all have our secrets." He tells Astor that he is proud of her for sticking up for Olivia, and she asks Dexter to tell the truth about Lumen being his girlfriend. He again denies that she is anything other than a friend who has been through bad stuff, and he's helping her deal with it. Astor asks if it makes him feel better about what happened to Rita but Dexter doesn't answer. He simply tells Astor that he loves her but she doesn't say it back. When Astor opens the car door to get her things from the back, Harrison says "Mama" to a toy and Astor realizes that he wasn't calling Lumen "Mama" after all. They both go inside to see Astor's grandparents and Cody.

Back at the lab, Dexter finds that the blood from Chase's vial matched a woman named Emily Birch who was not a Barrel Girl victim, but who is still alive.

Lumen gets a call from Jordan Chase, who is looking for Dexter. He leaves a message that he wants to schedule an appointment to see him. While holding his blood vial, Chase asks Lumen to tell Dexter one more thing: "Tick, tick, tick. That's the sound of his life running out." He addresses a terrified Lumen by her name and she gasps.

Dexter and Jordon on treadmills

Jordan explains his philosophy to Dexter

Dexter sets up another appointment with Jordan

Lumen sees shadow at the door

Lumen hides in the bathroom

Olivia and Astor scared by Lumen

Lumen scared by Olivia and Astor

Dexter questions girls why they are in Miami

"Harry" advises Dexter to get the girls out of Miami

Quinn tells Deb that he loves her; she doesn't reply

Liddy calls Quinn about pics he took of Dexter and Lumen

Dexter tells Astor that she looks like a raccoon

Lumen makes breakfast for the girls

Debra is assigned to work in the file room with Francis

Jordan notices drop of blood on his finger

Police start a search for the girls

Olivia and Astor held at mall for shoplifting

Dexter tells Debra that Lumen is his tenant

Bruises on Olivia noticed by Lumen

Quinn admits to Debra that he lied, suspected Dexter

Harrison's toy that he calls "Mama"

Dexter brings Astor to her grandparents, she holds his hand

Lumen gasps in terror when Jordan says her name 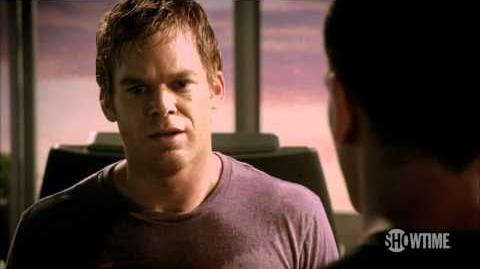 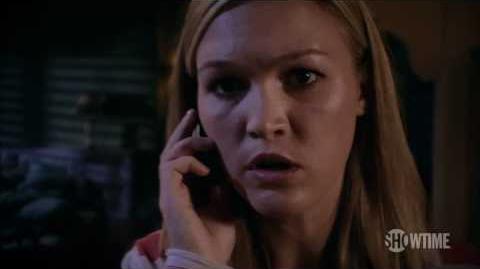