Clyde Phillips
Take It! is the eighth of twelve episodes in Season Five of Showtime's series DEXTER, and the fifty-sixth overall episode of the series. It first aired 14 November 2010 on Showtime.

Dexter and Lumen track a vicious murderer; Batista makes a difficult decision when Debra gets into some trouble from the fallout of the Santa Muerte Case.

Dexter Morgan attends one of Jordan Chase's motivational seminars. The audience watches videos on large screens of wild animals fighting and hunting in their natural habitats. On stage, Jordan gives an inspirational speech that centers around his philosophies on primal instinct. The behavior of Jordan's frenzied followers makes Dexter feel normal. As blends into the audience, Dexter focuses on Cole Harmon, the real reason he is there.

After the shootout at Club Mayan, Maria LaGuerta is surrounded by the press. She deflects questions about putting the public at risk and avoids commenting on the lawsuit being filed. When asked if she herself has retained counsel, she hurries inside the station.

Angel Batista informs Maria that ballistics prove that the two innocent women were not killed by police, but by the Fuentes Brothers. However, Maria is convinced there will still be serious consequences and she unleashes her anger on the homicide team.

Cira thinks she will be blamed for the screw up.

Angel tells Debra that he is still sorting through the events before he writes up his report. Sarcastically, Debra responds that it may be a crazy idea, but tell the truth.

Debra confides in Joey Quinn that she thinks it's a problem that she doesn't feel bad about killing Carlos Fuentes.

Angel takes Yasmin Aragon's mother to identify her daughter's body. He tries to comfort her by saying Yasmin died instantly without feeling any pain.

During the seminar, Dexter almost falls asleep. He's startled when Jordan states, "You are all going to die... some of us sooner than others," at the same time Dexter has the same thought.

During a break in Jordan's seminar, Dexter receives a call from Lumen. She hasn't found a connection between the five men in the photo, but did learn that Cole is a former Marine, dishonorably discharged for beating up a superior officer. Lumen warns he's the one who inflicted the marks on her back. When Dexter notices Cole approaching, he hangs up.

Cole re-introduces himself to Dexter, and says Mr. Chase wants to meet with him. As Dexter accompanies Cole to the hotel suite, they keep an eye on each other.

When Dexter enters the suite, Jordan is talking to a client on a headset but he quickly ends the call. He greets Dexter in a friendly manner, as Cole stands guard near the door. Jordan suggests that Dexter is there to find a way to cope with his loss. At the station, he recognized Dexter and realized his wife was killed by Trinity. Dexter is uncomfortable when Jordan mentions Harrison. After a few questions, Jordan rapidly taps his watch and says he needs to prepare for the next session. Dexter agrees to discuss his situation at another time. Jordan shakes Dexter’s hand and gives him a bag of merchandise, which includes a gift for Harrison.

Maria calls Debra into her office and hints at letting Cira Manzon take the fall for the Club Mayan Shooting fiasco. Debra is furious at this notion and believes they should all stick together.

While at the house, Lumen has an unexpected call from Owen, her ex-fiancé. He is in Miami and wants to meet with her the next day around noon. After they hang up, Dexter shows up with food. He says he booked the hotel room next to Cole's room and plans to kill him the following night. He asks Lumen to pick up duct tape, rolls of polyethylene sheeting, and garbage bags.

Dexter returns to the apartment and Debra mocks Jordan’s "Born Primal" onesie for Harrison. She’s annoyed that she has to attend six mandatory sessions with a shrink because she shot Carlos Fuentes. She doesn’t regret killing him, which surprises her. Dexter says some people don’t deserve to live.

The next day, while Cole is at his post during a seminar, Dexter practices his game plan for capturing Cole. He picks the lock to Cole's adjoining room, counts the steps to Cole’s bed, and eliminates a squeak on a door hinge. Dexter is now ready to grab Cole later while he's asleep.

Lumen meets Owen at a café across from the Blue Pelican Motel. After a few minutes of small talk, Owen says he has plane tickets for a trip around the world and wants her to come with him. He asks Lumen to think about it and give him an answer the next night.

Quinn and Debra watch a televised press conference in which Maria claims that Debra was in charge of the failed club operation. Debra is furious, and learns that she will be placed on immediate suspension. She storms out of Quinn's apartment.

Stan Liddy stages a fender-bender with Lumen to learn about her when they exchange information for insurance purposes. He notices the supplies of plastic wrap and trash bags in her car.

Meanwhile, Dexter keeps his eye on Cole who is in the hotel lobby, flirting with an attractive blonde woman. He’s annoyed when Lumen calls, saying that she is in the lobby instead of their agreed upon meeting place. They carry the supplies to the room and Lumen tells Dexter about Owen and the car accident.

To avoid Lumen running into Cole, Dexter advises her to stay in the room overnight. Together, they prepare the room by covering it in plastic. Dexter thinks it's easier with a partner.

Debra barges into Maria's office after being publicly blamed for the Club Mayan shootings. Maria claims that "some people" are backing her version of events, leading Debra to assume that Angel is taking his wife’s side.

As Lumen observes Dexter setting up pictures of the barrel victims, she realizes that he's been doing this for a long time, and Boyd Fowler wasn't Dexter's first kill.

They hear Cole enter his room but, unfortunately, he has the blonde woman with him. The sound of her screams during sex reminds Lumen of when she was raped. She sits helplessly on the floor, covering her ears as Dexter holds his hands over hers. Finally, Lumen falls asleep for a few hours. Since the woman spent the whole night with Cole, Dexter was unable to kill him. His new plan is to grab Cole during one of his security rounds.

It's Sunday morning and Debra is lying in bed next to Quinn. He says that the best way for Debra to get back at Maria is do what she says for now, get reinstated, and then kick as much ass as possible. Quinn answers a knock at the door and is annoyed to find Liddy. Once Debra leaves to get a breakfast burrito, Liddy reveals Lumen's name and some other information about her. When Quinn balks at giving him more money, Liddy threatens to tell Debra that he's investigating her brother.

During the last seminar, Jordan coaxes Dexter up to the stage. He's uncomfortable when Jordan pushes him to relive the circumstances surrounding Rita's death. With extreme difficulty, Dexter opens up about what he felt at the time,

Meanwhile, Lumen is in the lobby watching Dexter on a large screen. As she turns away, she unfortunately bumps into Cole who instantly recognizes her. Panicked, Lumen runs back to her room with Cole in pursuit. She locks the door and looks through the peephole, but doesn't see Cole.

As the crowd cheers Dexter, he receives an alarming text from Lumen and rapidly leaves the stage. Jordan continues on with his seminar, as Dexter hurries to his hotel room.

Suddenly, Cole breaks through the connecting door and captures a struggling Lumen. His hands are around her neck when Dexter arrives to render Cole unconscious in a sleeper hold.

Dexter wakes Cole, who is now wrapped in plastic. He refuses to tell them the names of the other two men. Cole just smirks arrogantly and mumbles, "Huey, Dewey, and Louie." Dexter forces him to look at the pictures of the dead women in barrels, before he slices his cheek for a blood trophy.

As Dexter holds a knife over Cole, he looks at Lumen. When she nods in approval, he stabs Cole in the heart. Dexter admits that he’s done this before, and states, "This is who I am." He tells her that his mother was murdered in front of him when he was a child, and he has since led a life of killing. Then he gives Cole’s blood slide to Lumen, and wonders if someone can finally accept him.

Cira Manzon brings a box of her stuff into the homicide department and Debra realizes she is the one turning on her. Angel tells Debra that he's going to back her version of events, not his wife's.

Dexter is on his way out of the hotel, carrying Cole's dismembered body parts in his luggage. He runs into Jordan who is dealing with a "security issue." The two talk for a moment during which Jordan says the phrase, "Tick, Tick, Tick... that's the sound of your life running out." This confirms to Dexter that Jordan is one of Lumen's abusers.

At the house, Lumen stares at Cole’s blood slide. She does not meet or call Owen and he tears up her plane ticket.

Dexter and Lumen dispose of Cole's remains from the Dexter Slice of Life and they discuss taking out Jordan. As they drop the bags into the water, Liddy photographs them with a telephoto lens.

Jordan speaks at his seminar

Dexter among the attendees

Yasmin's mother arrives at the station

Dexter on call with Lumen during break

Cole tells Dexter that Jordan wants to see him

Dexter and Cole keep their eye on each other

Lumen receives a call from Owen, her ex-fiancé

Dexter tells Deb that some people don't deserve to live

Stan Liddy stages a car accident to learn about Lumen

Debra confronts Maria about blaming her

Dexter on stage with Jordan

Cole and Lumen spot each other

Cole captures Lumen in her room

Angel assures Deb that he is backing her

Dexter leaves with Cole's remains in his luggage 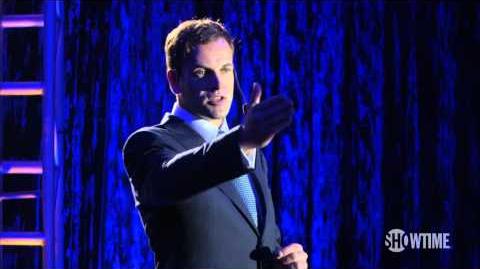 Dexter Season 5 Episode 8 - Behind the Episode 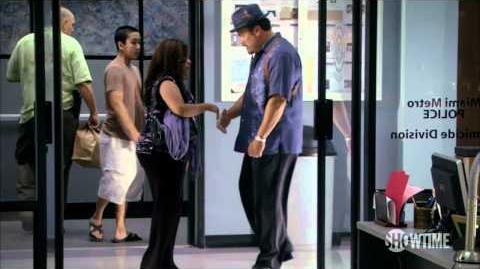 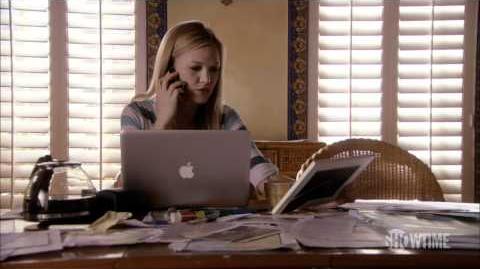