Clyde Phillips
Circle Us is the seventh of twelve episodes in Season Five of DEXTER, and the fifty-fifth overall episode of the series. It first aired 7 November 2010 on Showtime.

While helping Lumen Pierce, Dexter Morgan is called to investigate a horrifying crime scene; the Santa Muerte Case leads to a violent standoff between Debra Morgan and the killers.

It’s been over a month since Dexter saved Lumen Pierce from Boyd Fowler and she is now staying in Dexter’s house. When he brings her food and tells her to eat it, Lumen accuses him of being “very controlling.” Dexter calmly replies, “When I need to be.”

Dexter asks Lumen for details about her rapists. She tells him about "Watch Guy," a man who kept her tied to a chair, blindfolded. He tormented her by holding a ticking watch to her ear while whispering, “Tick..tick..tick. That’s the sound of your life running out.” Next, she describes “Suit-and-Tie.” He always removed his jacket and carefully folded it before attacking her. Lumen is sure she will recognize him because he always took off her blindfold.

After dark, a pickup truck backs up to the marsh where Boyd dumped the Barrel Girls. The driver gets out and neatly folds his suit jacket before placing it on the seat. He instructs four hired men riding in the back to retrieve the drums from the marsh and load them onto the truck. He watches the men as they wade into the water.

Lumen wants to help Dexter find her abusers but he says that he works alone. When she persists, he tells her, "We'll see." Dexter thinks to himself that Lumen has no other part to her life than revenge, but he can’t bring her into his world. Before he leaves, Lumen thanks Dexter and he awkwardly shakes her hand.

After paying off the night laborers and leaving the marsh with the five 55-gallon drums that contain dead girls, the driver gets violently T-boned by a speeding vehicle at an intersection.

When Dexter relieves Sonya, he notices that she placed a figurine of Saint Brigid above Harrison's crib to watch over him. Sonya says a prayer and, after she leaves, Dexter puts the figurine inside Harrison's toy box.

Just as Joey Quinn brings up the topic of living together to Debra Morgan, she suddenly gets a call about the traffic accident. She informs Quinn that he'll also be getting a call, and he asks why she didn’t say that he was there. Debra explains that she wants to keep their relationship a secret. Quinn asks if they can at least drive in together, but Debra won’t even do that.

Dexter arrives at the accident scene, and Angel Batista shows him opened barrels and five female corpses lying on the street. Dexter realizes that someone tried to move the girl in the marsh. The driver who caused the accident had been drunk and doesn’t recall much. The other driver had fled. Dexter finds Vince Masuka already working inside the truck. Evidence collected so far includes the folded jacket and fingerprints. Dexter spots Lumen watching from the crowd and goes over to warn her that its not safe for her to be there. Quinn notices the interaction from afar just as Stan Liddy calls to tell him about a blonde woman who is staying at Dexter's house.

Inside the glove compartment, Debra finds a registration identifying the truck as belonging to Jordan Chase, a renowned motivational speaker. Dexter knows it was Jordan’s voice that Boyd was listening to when he was inside his house. The prints found inside the truck are not in the AFIS database, but Dexter spots a few hairs on the suit jacket, which Masuka says isn't nice enough to be Jordan's jacket.

Quinn tries to get in touch with Jordan, while Debra works on identifying the victims. Quinn brings up their living together again, which irks her.

Angel, Debra, and Quinn are called into Maria LaGuerta's office to talk about an upcoming operation to apprehend the Fuentes Brothers at Club Mayan. With help from Yasmin Aragon, an informant, the plan is to arrest the brothers before they enter the club. Debra and Angel will wait outside in a van while Quinn, Maria, and Officer Cira Manzon will be inside. Before leaving, Captain Thomas Matthews warns Maria that her future depends on this plan working smoothly.

Jordan and his head of security, Cole Harmon, show up unexpectedly at the homicide department. Dexter snaps a picture of Jordan with Masuka, who is a fan, and one of Cole. Jordan's expensive watch is noticed by Dexter and he comments on it. When Jordan and Cole are asked about the truck, Cole admits that it's his personal vehicle, but claims it was stolen. Jordan provides an alibi, proving that he was out of the area when the accident happened. Masuka matches Cole's hair and prints to those found inside the truck, and Angel thinks Cole should be the focus of the investigation.

Dexter arrives at his house to discover that Lumen had an industrial-size flashlight delivered. When he shows her the cell phone images he took of Jordan and Cole, she confirms that Cole is Suit-and-Tie, but does not recognize Jordan. Dexter tells Lumen that, in all likelihood, Cole and the rest of her abductors will soon be in the hands of the police. Although they could be executed, this doesn’t satisfy Lumen and she wants to kill them herself. In order to help her, Dexter must throw the police off Jordan and Cole, and give Boyd to the police as a new suspect.

Dexter and Lumen break into Boyd's house and clean it of her prints and DNA. Lumen remembers what happened in the attic. Dexter plants Boyd’s wallet inside Cole’s truck and Masuka soon finds it. This discovery leads the department to Boyd's house where evidence is found of the murders.

During questioning by police, Cole tells Angel that Boyd was one of Jordan’s stalkers. Cole says he never thought Boyd was dangerous but now thinks Boyd was the one who had stolen his truck. In the parking lot, Jordan turns to Cole and says approvingly that steering the police toward Boyd was the first thing he's done right. Cole admits he wasn't the one who did it.

Dexter confesses to Sonya that he doesn't like Saint Brigid being placed over Harrison. This disturbs her and she asks him to reconsider.

Stan Liddy tells Quinn that if he wants more info about Dexter and Lumen, he needs more money. Quinn is unsure if he wants to proceed but ends up giving Liddy an additional $500 cash.

Yasmin is wired and instructed to engage the Fuentes Brothers. Once inside the club, she notices they are already there, sitting at a VIP table. She tells the cops that there is a private entrance from the club next door. Maria orders Yasmin to sit with the brothers.

Dexter breaks into Cole's house, leaving Lumen in the car with instructions to stay there.

One of the Fuentes Brothers notices Cira and asks her to join them. Debra tells her to ignore the request, since the men are dangerous but Maria overrules her and sends Cira up to the VIP area. While there, one of the brothers discovers that Cira has a gun in a thigh holster. The brothers quickly pull out their guns, resulting in Yasmin being shot in the back. The undercover officers pull out their weapons, and a firefight ensues. Debra points her gun at Carlos Fuentes, the same brother she hesitated shooting before. Carlos grabs a bystander and puts a gun to her head. After a momentary stand-off and heated exchange, Debra coolly shoots Carlos dead center in his forehead, and he falls to the dance floor. Marco escapes alive,

Dexter snoops around Cole's house in the dark and finds an old picture of Cole and four other young men. While he is looking at it, Cole sneaks up behind Dexter and grabs him in a choke-hold. Suddenly, Lumen appears and hits Cole over the head with her flashlight. An alarm sounds and they flee the house. In the car, Dexter and Lumen look at the picture. They recognize Cole Harmon, Boyd Fowler, and Dan Mendell, but two are unknown. Lumen thinks it is a huge discovery, and Dexter asks, "What do we do next?"

Chief Matthews is furious that Yasmin and a bystander were killed in the shootout. He demands Maria have a report written for him in a few hours. Angel tries to smooth things over with his wife once Matthews leaves, saying that everybody makes mistakes. She curtly tells him she did not make a mistake and walks away, leaving him surprised by her attitude..

Dexter returns to his apartment to relieve Sonya. To her delight, Dexter places the Saint Brigid statuette above Harrison's crib. The next morning, Dexter brings Harrison to his house to meet Lumen and she's immediately affectionate to his son.

Lumen tells Dexter about her rapists

Cole brings men to the marsh

Lumen wants to help find the rapists, but Dexter says he works alone

Cole pays the men for their work

Cole drives away alone with the barrels

Lumen thanks Dexter and he shakes her hand

Cole's truck is hit by a drunk driver

Quinn asks Deb about living together

Angel tells Dexter about the accident

Hair strands are found on the jacket

Jordan Chase and Cole Harmon show up at homicide

Jordan introduces himself to Debra

Masuka is thrilled to have his picture taken with Jordan

Dexter sneaks a photo of Cole

Jordan and Cole are interviewed by Maria and Angel

Masuka matches hair on jacket and fingerprints from van to Cole

Dexter is annoyed that Lumen had a package delivered

Lumen doesn't recognize Jordan since she was blindfolded

Attic reminds Lumen of her ordeal

Dexter takes Boyd's wallet to plant in the truck

Masuka finds Boyd's wallet and shows it to the team

Cole and Jordan are again questioned

Photo of Boyd viewed by Jordan and Cole

Jordan thanks Cole for steering the police to Boyd, but Cole says he didn't do it

Yasmin is wired for the stakeout at Club Mayan

Carlos asks Cira to sit with him

Debra tells Maria it's too dangerous for Cira

Photo of Cole and friends as teenagers

Lumen is overjoyed to have the photo

Matthews is furious about the shooting deaths at the club 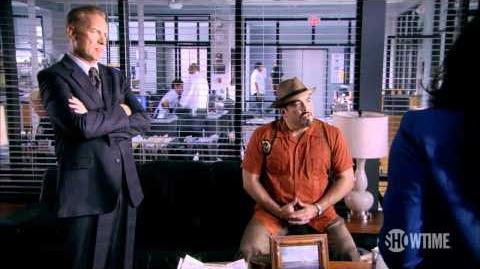