Clyde Phillips
First Blood is the fifth of twelve episodes in Season Five of DEXTER, and the fifty-third overall episode of the series. It first aired 24 October 2010 on Showtime.

Dexter Morgan is concerned about Harrison because he watched his mother die. They attend a parenting class, and Dexter is reassured by the counsellor that Harrison won't remember it. However, Dexter suspects that Harrison scratched another baby on the cheek (the same spot where Dexter takes blood slides), and smiled about it. Dexter is worried that Harrison may have a dark side. Later, Harrison also scratches Dexter's cheek.

Lumen Pierce is obsessed with finding the men that raped and tortured her. She goes back to Boyd Fowler's house before Dexter does and finds a letter from his old cellmate, Robert Brunner. She is convinced that Robert is one of her rapists. Dexter tries to persuade her move on and return to Minneapolis. Dexter decides that he will kill Robert himself.

Dexter tracks Robert to the Julia Tuttle Causeway where he is living with other homeless sex offenders. Dexter sits with Robert for a bit and listens to him tell stories of raping women. He then injects Robert with M99 and takes him to a kill room. As Dexter starts his ritual, he notices an ankle monitor on Robert and realizes that he could not have been one of Lumen's attackers.

The next day, Lumen heads to the Tuttle Bridge to kill Robert. She is about to shoot him when Dexter stops her and informs her that that Robert is not one of the men. She falls apart when she realizes she almost killed an innocent man.

Meanwhile, Debra Morgan is hunting the Fuentes brothers, who are responsible for several murders. She has a clue from Jandro Mendoza who drew a tattoo he had seen on Carlos Fuentes' hand. Debra and Vince Masuka ask about tattoo at a tattoo studio. While there, the tattoo artist flirts with Debra.

Debra and Cira Manzon find two rotting corpses, after which Cira vomits. Debra discovers that the tattoo is a hand stamp for a night club, the Club Mayan, where the Fuentes brothers likely hang out.

Debra and Joey Quinn continue to sleep together. Angel Batista suspects that his wife, Maria LaGuerta, is having an affair when she is actually working under cover to get his charges dropped.

Dexter asks Sonya about Harrison's behavior and she reassures him that he is a normal baby.

Dexter takes Lumen to Miami International Airport. She has a panic attack while going through security. She leaves the airport and enters a cab, deciding to stay in Miami and finish tracking down her rapists. 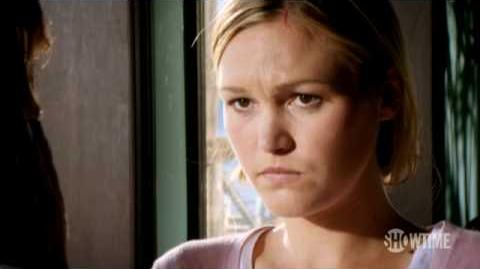 Dexter Season 5 Episode 5 Clip - Get Rid of Me 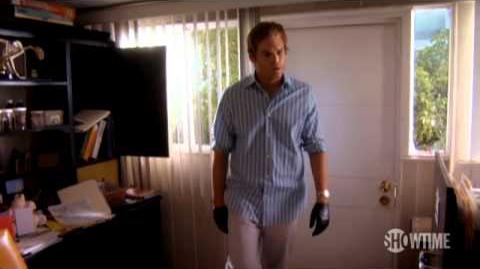 Add a photo to this gallery
Retrieved from "https://dexter.fandom.com/wiki/Episode_505:_First_Blood?oldid=124302"
Community content is available under CC-BY-SA unless otherwise noted.