Clyde Phillips
"Beauty and the Beast' is the fourth of twelve episodes in Season Five of the Showtime series DEXTER, and the fifty-second overall episode of the series. It first aired 17 October 2010.

Dexter has to save a life instead of taking one; Deb has a scary confrontation with a key suspect in the Santa Muerte murder cases; Quinn continues following up on the strange similarities between 'Kyle Butler' and Dexter Morgan.

Quinn tells the FBI that he may have a lead on Kyle Butler. Dexter tells Jonah Mitchell that there is a "great big shit ugly world out there." Debra acknowledges her quickie with Quinn. Batista beats down Lopez. IA tells LaGuerta that Batista may be in some real trouble. Cira tells Debra she has a lead on the icons. Dexter reviews Boyd Fowler's highlights, including the setup of the kill room, the actual dispatching thereof, and the discovery of The Beauty; a shivering, disheveled, grubby, bleeding woman in soiled lingerie.

Having taken the disheveled woman to the abandoned Miami Visitor Information Center that Dexter intended to be Boyd Fowler's kill room (although that did not go as planned), Dexter delicately tends to her numerous wounds. They include long, deep, and vicious lacerations on her back. Dexter and "Harry" review the awkward situation they are now in. The woman comes to, freaks out, and Dexter sedates her.

Debra calls and requests Dexter's expertise at the La Botanica murder. Dexter schemes to use this new crime scene in order to identify the woman. He places her fingerprints on a cleaned bottle.

At La Botanica, the onlooking crowd is getting restless. "There are fewer beheadings in the rich parts of Miami" seems to be their gripe. Vince greets the blood spatter analyst with the new nickname "Dexterous." The team is mentally exhausted. All they know is Fauzi Goberi was killed by machete.

Dexter quickly reads the blood. Fauzi fell where he was found. It took three whacks to sever the head, which was immediately placed on a pedestal. Eyes and tongue cut out. Fauzi's cheeks were sliced to the rear of the jawbone. Dexter asks, who's been smoking? Masuka answers, "Its 2010. Who smokes?" "Machete man," rejoins Dexter, adding, "...a small cigar, highly unstable ash, short torn tobacco leaves. It's a cheap one." Debra blurts out, "Fuck me in both ears," then sends uniformed officers to search the alley for "small cigar butts." Masuka cautions the officers, "Watch the Ev." Dexter places the fingerprint bottle into evidence.

Dexter returns to his apartment, trying to minimize his staying out all night blunder to Sonya. She calmly and politely outlines the situation to Dexter, finally telling him, "Never lie to someone who trusts you. Never trust someone who lies to you." Harrison emotes sorrow as Sonya leaves, apparently for good.

On his cell phone, Quinn is talking to Special Agent Ray Walker on his mobile. Walker says no, the FBI won't allow Quinn to meet with the Mitchell's, as it would be a violation of safe house procedures. He again offers to take the picture himself. Quinn also says no, that issue is too sensitive. The call ends, with Quinn having staked out Ray. Quinn follows Walker to the safe house and confirms to presence of Jonah Mitchell.

Debra briefs the squad. The cigarette butt had DNA and a partial fingerprint. Dexter arrives with Harrison and promptly hands him over to a thrilled LaGuerta. Quinn watches Dexter with suspicion as he enters his lab.

As Dexter searches for a fingerprint match, he unlocks Masuka's pharmaceutical fridge and helps himself to some medications for the Beauty. His fingerprint search finds one Lumen Ann Pierce from Minnesota. There are no warrants, not even a traffic violation, and no missing person report. Dexter and "Harry" discuss their precarious position with regard to Lumen. Quinn tries but fails to recover Dexter's search.

Debra heads home to get some rest, taking Harrison with her.

LaGuerta tells Batista that he needs to apologize to Sergeant Lopez, who is recovering from the bar fight.

Lumen has awoken at the Visitor Information Center. She's clad in a tee with a flower print on the front. Dexter offers her the medications for her injuries, but she declines. He offers her water. She asks, "Where am I?" She lies that her name is Rachel. She asks, "Why didn't you take me to the hospital?" "You know why," answers Dexter. She denies seeing anything. She begs to be let go, then asks, "Are you going to sell me?" Dexter says he will do nothing to her. Dexter again tries to get Lumen to take the medications, She drops them as fear grips her. She begs again, hysterically, to be set free. Dexter bolts out, padlocking the door with a newly installed hasp.

Angel visits Lopez in the hospital. He offers an apology, which comes out somewhat inflammatory. Lopez points out that he is in the hospital, but agrees to not press charges. The personal situation seems unresolved.

Back at the apartment, Dexter searches for information on Lumen Ann Pierce. Debra has gotten no sleep. She expresses her dissatisfaction with her current situation.

Dexter finds the Towne House Motel where Lumen has an unpaid balance. He pays it off and receives her luggage. He finds a letter from Lumen's mom and leaves it with Lumen. While reading it, she begins crying.

Dexter returns home. Debra has deliberated and reaffirms her commitment to family, telling Dexter that he and Harrison can stay forever. They have a beer.

Dexter takes Harrison to Sonya's apartment. Dexter asks for another chance. Sonya doesn't think that it's a good idea. Dexter apologies and relates how difficult it was to find a good nanny. They go back and forth. Sonya takes a leap of faith; One more chance, just one, she says.

Masuka asks Quinn to check out his pharmaceutical fridge. Vince accuses Quinn of 'dipping in' to his medications. Quinn denies taking anything, which is true, or being involved with Debra, which is not true. Vince says he admires Quinn's chivalry.

Internal Affairs investigator Jim McCourt returns to the detective squad. Batista tries to get McCourt to back off. Batista says he's visited Lopez in the hospital and they've put their differences behind them. McCourt tells Batista that it isn't quite that simple.

Jim McCourt has arrived to see LaGuerta. She wants to know what will end all this fuss, He wants to know what started the bar fight, which is because Lopez said LaGuerta gives the "best blow job in Miami." Batista watches them talk from outside her office and across the squad room. He cannot hear them, though.

Debra returns to work, jubilant. Masuka has a match for the partial print on the cigar butt. Batista is distracted. "Carlos Fuentes" says Debra, "He's got a brother, Marco. They live together." Batista says he'll get the team together. Debra notices that Quinn is missing, again.

Quinn gets a text from Debra about the raid.  He spots Jonah Mitchell outside the safe house.

Patrol and unmarked police cards pull in from opposite ends of an alley, in front of an apartment building. Car doors slam as the team of plain-clothed and uniformed officers in Kevlar converge on the rear door of the building. An officer carriers a battering ram.  A door opens, and “Freeze” rings outs.  Debra overrules, “We want Fuentes. Let him go.” + Debra knocks, “Open up!  Police!”  Officer battering ram facilitates entry.

A squalid, overcrowded apartment greets them; a little girl screams.  The frightened but compliant occupants all give blank stares to their inquires.  Debra moves further into the flop house.  A cooperative man says he speaks no English, but tilts his head toward a closed door.  Debra opens it to find a closet with a man-sized rat-hole to the next apartment.  She goes in.

A low table and mantel are festooned with lit candles, religious icons, animal heads, human skulls, spices, herbs, potions, and other religious artifacts. To her left, she sees a cowering young man in the kitchen, standing erect with a battle machete to his throat. “Put down the pistol,” orders Carlos Fuentes, the man behind the hostage, in Spanish. “You cut him and I'll blow your fucking head off,” warns Debra.  The man repeats his demand.  They go back and forth.

Batista's voice comes over the radio, “Everybody Clear?”  Carlos tells Debra to respond.  Once around again, and this time Debra radios back, “Clear.” Carlos, now in English, says, “You stupid bitch,” slicing the hostage's throat and punching him towards Debra.  She catches the victim, gets off two wild shots, and calls for a medic.

Outside, we see Debra quite shaken.  The paramedics bring out the victim. “Don't you dare let him die,” she says.

Dexter returns the next day and finds Lumen lying on floor, apparently unconscious. When he bends down to check on her, she hits him over the head with an object. She immediately runs out the door and locks it with the padlock. However, Dexter's strength prevails and he bursts through the door, giving chase. Lumen almost escapes but she hesitates to get into a car with young men, and Dexter captures her again.

Quinn is parked outside the safe house and observes Walker, Jonah, and an FBI handler exit the house, enter a car, and leave.

Dexter has Lumen zip-tied inside his car. She terrified, and he doubts that she'll ever trust him. He ponders the first rule of the Code: Don't get caught.

Having followed the car to a convenience store, Quinn watches Jonah and the FBI handler go inside. Quinn also enters, passes by the handler, and approaches Jonah. He shows his badge and a photo of Dexter to Jonah, asking if that's "Kyle Butler." Just then, the FBI handler appears, pulls his gun on Quinn, and arrests him.

Dexter stops his car at a marsh, pulls on black gloves, and grabs a knife. He cuts Lumen loose and forces her to accompany down to the water. Lumen likely thinks she's going to be killed. However, Dexter opens a barrel and shows her the dead girl inside, which horrifies her. To gain Lumen's trust, Dexter gives her his knife. She promptly cuts his arm, but he doesn't retaliate. Lumen is finally convinced that Dexter saved her from the same fate, and she begins to trust him.

Quinn is released and Lt. Maria LaGuerta berates him for going behind her back after he was ordered to leave Trinity’s family alone. She dismisses Quinn’s allegation that Dexter is Kyle Butler as “bullshit” and reminds him that Dexter just lost his wife. Quinn is put on unpaid suspension.

In the station's parking lot, Quinn apologizes to Deb for not backing her up earlier. Deb looks at him and says, "I don’t want to be alone tonight." Quinn replies, "Deb, I’m no good for you." She answers, "I’m not looking for good right now."

Dexter and Lumen sit together while she bandages his cut. Dexter tells Lumen that her ordeal is finally over, but she reveals that Boyd was not the only one; there are others who also raped and tortured her. 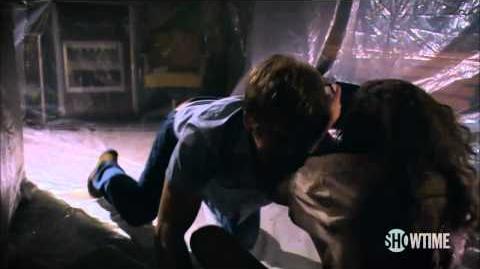 Dexter Season 5 Episode 4 - Behind the Episode 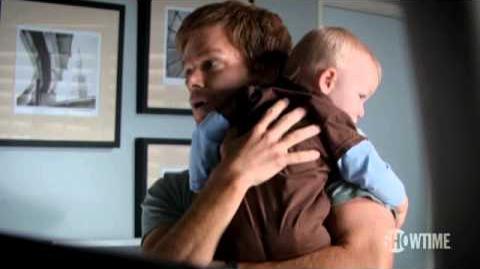 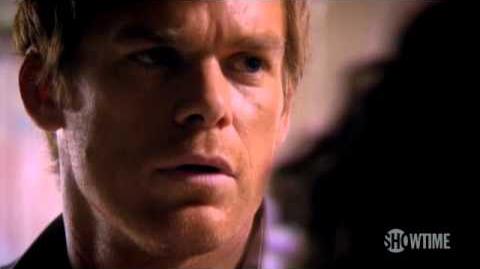