Clyde Phillips
Practically Perfect is the third of twelve episodes in Season Five of the Showtime series DEXTER, and the fifty-first overall episode of the series. It first aired 10 October 2010.

Dexter finds it hard to adapt to a life without Rita; a nanny is hired for Harrison; Boyd Fowler becomes Dexter’s next target; Debra takes the lead on a bizarre double homicide; Quinn notices similarities between the Trinity Killer associate 'Kyle Butler' and Dexter.

Dexter is still off duty recovering from recent events. He enlists Debra's help to find a nanny for 10-month-old Harrison. She questions the candidates as if performing police interrogations. “I wasn’t expecting these kinds of questions,” says one young woman. Eventually, Dexter settles on Sonya, an Irish woman with a nursing degree who seems to have a magic touch. When she picks up Harrison, he is immediately all smiles, and she nicknames him “Prince Harry.” As soon as Sonya leaves, Dexter tells Debra that she’s “the one.”

With a nanny for Harrison hired, Dexter has free time to pursue Boyd Fowler. Dexter sits down at his laptop to go over the photos he’s taken of the women Boyd murdered. “I don’t know if killing you will fill the void, but it’s a place to start,” Dexter thinks to himself.

Meanwhile, at Miami Metro Homicide, everyone is gathered around the television looking at surveillance footage from an ATM. It shows Francisco Alfaro (now deceased) repeatedly entering the wrong pin number and getting no cash from the machine. It was taken two hours before his wife was killed. The evidence suggests murder-suicide, with Alfaro killing his wife then shooting himself in the face. Nina Alfaro’s head was cut off, and placed in a public park surrounded by ceremonial candles.

Debra notices that Masuka and Batista are sporting some bandages. Masuka makes a joke of it, and Batista says “it’s not worth talking about.” LaGuerta orders them to focus on the case. The personal tension between Quinn and Deb spills over into the workplace and they argue about whether Alfaro killed his wife. Deb offers to return to the neighborhood with Batista in an effort to find out more information. LaGuerta asks Batista about his bar fight with a cop, and he plays it off as not a big deal, saying that it’s settled.

Dexter and Harrison meet with a crisis counselor. She insists that little Harrison’s cognitive abilities are just developing, so there’s no chance he was able to comprehend what happened to his mother. Dexter brings up the trauma he experienced when he was three years old, but the counselor reiterates that Harrison is only ten months old. Just then, Harrison pulls the head off a doll. The counselor assures Dexter that children Harrison’s age may exhibit what seems like violent behavior, but it’s nothing more than the release of energy. She advises him to find something to release his own energy and "do something for Dexter." He replies, "Dexter will."

Quinn and Debra are back out on the streets with Batista, trying to find a lead. Quinn tells Deb that it’s frustrating since they haven’t had sex for nine days and thirteen hours. She tells him to unplug his clock. Quinn teasingly replies, "I'm just saying, at this point we might as well be married." Deb snaps back, "Shit on my face if you ever use words like 'we' and 'married' in the same fucking sentence again." Angel walks up, wondering what they are talking about. The three of them agree that the people in the neighborhood are too afraid to talk.

Dexter arranges an "accidental" meeting with Boyd at an outdoor cafe called the Hungry Dog Diner. While sitting at a table, Dexter calls home to check on Harrison and give tips to Sonya, who has everything under control thanks to a checklist he gave her. While Boyd is eating his lunch, he finally notices Dexter. He walks over and Dexter invites Boyd to sit with him. Dexter introduces himself as Daryl Tucker, an unemployed man ready for any odd job. Boyd suggests working in Dead Animal Pickup and he offers to take Dexter along on a ride to see if he is interested. Dexter accepts, hoping to use it as an opportunity to kill Boyd.

Dexter has 24 hours to prepare a kill room, so he finds a closed down, fenced off tourist welcome center near Boyd’s route. “Not very welcoming now,” he thinks as he climbs over the fence. Once inside, he constructs his kill room by covering it in plastic and setting up photos of the dead Barrel Girls.

Debra brings Cira Manzon, the Spanish-speaking officer, with her to La Botanica to investigate the beheading case. Cira grew up in the neighborhood and speculates that the killer they’re looking for belongs to a Santeria religious cult. The front room of La Botanica sells Jesus and Mary statues and similar items. When Debra and Cira are allowed into the back room, they find the darker Santeria merchandise. At first, the owner, Fauzi Goberi, pretends he can’t speak English and offers little help. Goberi admits he doesn’t believe in what he selling, and then reveals that he can speak English.

Outside La Botanica, Deb and Cira decide that Fauzi won’t help them because Debra is an outsider. Debra asks Cira to return alone to the store the next day to try again.

Dexter arrives home to find Harrison and Sonya gone. He searches the apartment, thinking the worst. He phones Sonya, but there’s no answer. Suddenly, she walks through the door with a sleeping Harrison, having not stolen him. She had merely taken him out for some fresh air. Sonya tells Dexter that she left a note on the fridge and feels bad for causing him to worry. Dexter thinks, "I'm not used to checking the fridge for notes. Just messages from other serial killers."

LaGuerta asks Batista for details about his bar fight with Sergeant Lopez and he admits it was caused by Lopez making disparaging remarks about her. He promises to keep the bar fights to a minimum.

Dexter and Deb talk outside on Dexter’s balcony about their day. Debra wonders why Sonya left Ireland, and he jokingly tells her to check Interpol. Dexter says he talked to Cody and he seems happier, but Astor wouldn’t come to the phone. Deb advises Dexter, saying that establishing a routine can be a ladder to climb back into normalcy. After claiming to to have thought of this herself, she admits she heard it from Oprah.

The next morning, Dexter calls in a dead alligator at County Road 5, Mile Marker 31 as bait to lure Boyd near the vacant tourist center. When Boyd pulls up, Dexter enters the truck and they go off to pick up a dead cat. During the trip, Boyd listens to the Take It Now! CD by Jordan Chase, while talking glowingly of how it changed his life. When Boyd tells Dexter it could help him through his divorce and mentions the wedding band dent on his ring finger, Dexter realizes that Boyd doesn't miss much.

At the station, Quinn looks at sketches of Kyle Butler, noticing the similarity to Dexter. He grows suspicious that there’s a connection between Dexter and Kyle Butler.

Cira tells Deb that she revisited Fauzi and he gave her a description of two likely suspects. They view the bank security footage again, and Deb suggests that Nina may have been held hostage for ransom. Francisco Alvaro’s behavior can be explained if he didn’t know the password to the ATM.

As Dexter watches Boyd scrape a dead animal off the road, Boyd remarks that Dexter has a nose of steel and is made for the job. Finally, the call for the gator comes through and Boyd drives to the location, advising Dexter to be cautious as the gator may not really be dead. He tells Dexter not to worry, though, because he’s a "safety guy."

Deb and Cira return to La Botantica to talk to Fauzi. It looks empty at first, but when they look in the back room, they find him dead and decapitated.

When the Boyd and Dexter arrive at the gator’s supposed location, Boyd begins to search for it, with Dexter close behind him. Unfortunately, as soon as Dexter injects Boyd in the neck with M99, he turns around in surprise and shoots Dexter with a tranquilizer dart. They both fall to the ground and pass out.

A motorist spots Boyd and Dexter and calls 9-1-1. Both are rushed to the County Medical Hospital in the same ambulance. When questioned by the paramedic, Boyd lies. He claims that he shot Dexter with a dart accidentally, and he was so upset, he passed out.

As the two are being wheeled through the hospital, they keep an eye on each other, looking past the medical staff. After the doctors clear out, Boyd quickly rises from his bed, rips off his tubing, and searches for something sharp. After finding a large pair of scissors, he carefully makes his way to Dexter's bed. However, Dexter has already left the facility, and so Boyd sneaks out and returns home.

At Fauzi’s crime scene, Cira blames herself, saying that he was killed because he talked to her. Vince Masuka describes Fauzi as being killed in the same manner as Nina Alfaro, with tongue and eyes excised. Quinn contacts FBI Agent Ray Walker, asking for permission to show a picture of his “suspect” to Arthur Mitchell’s family, who are about to go into witness protection. “Give me the photo; I’ll show it to them,” Walker offers, but Quinn refuses. It’s too sensitive, he claims, knowing that if he’s wrong, it could be career-threatening. The conversation ends with Walker offering to see what he can do, but making no promises.

Boyd arrives home and enters his house. He hears a loud noise and retrieves a handgun from the kitchen drawer. As Boyd searches for an intruder, his Take It Now! CD starts to play. Visibly nervous, Boyd approaches the CD player. Just then, Dexter injects him from behind with M99, rendering him unconscious.

While Dexter is setting up an impromptu kill room, Sonya calls to say that Harrison took his first step. She emails him a picture of his son.

Jim McCourt from Internal Affairs meets with LaGuerta to inform her that Batista’s physical altercation with Sergeant Lopez is being investigated. Lopez collapsed on duty and was hospitalized. He is now pressing presses charges against Batista.

Boyd wakes up on his own dining room table, held down by duct tape. Dexter is standing nearby wearing a yellow Natural Born Griller apron and sharpening a knife. Newspapers cover the walls. Boyd orders, "Let me the fuck out of here." Dexter replies, "I bet you've heard that before," referring to the women Boyd held captive.

Having to improvise in Boyd's house, Dexter is disappointed that Boyd won't see the kill room in the vacant tourist center. Dexter collects a blood slide, and paints a word picture of Boyd's misdeeds (since the victims' photos were left at the tourist center). Boyd proclaims that he was doing them a favor because they were suffering. Dexter informs Boyd about Rita's murder and how killing him is the start of his healing process. Boyd warns Dexter that he has no idea what he's getting into, but Dexter shrugs it off and says, "I want my wife back, but this will have to do." He then stabs Boyd directly into his heart.

A moment later, Dexter notices someone peering through a window in the attic door. When Dexter opens it, he finds a battered woman. She tries to escape, but collapses from exhaustion. 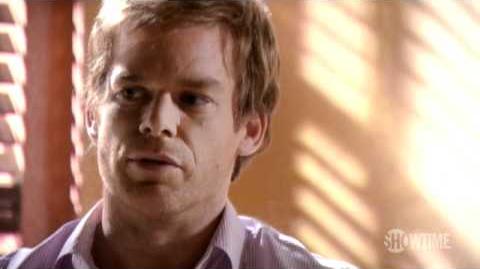 Dexter Season 5 Episode 3 Clip - Do Something for Dexter 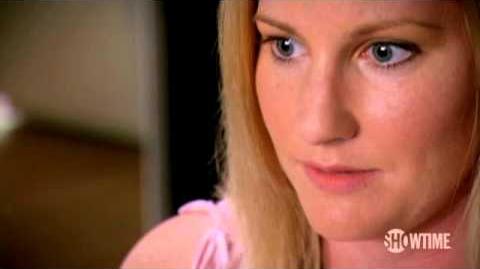 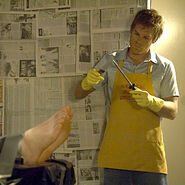 Dexter prepares for the kill

Dexter finds a witness
Add a photo to this gallery
Retrieved from "https://dexter.fandom.com/wiki/Episode_503:_Practically_Perfect?oldid=119547"
Community content is available under CC-BY-SA unless otherwise noted.