Clyde Phillips
My Bad is the first episode of Season Five of the Showtime series DEXTER, and the forty-ninth overall episode of the series. It first aired 26 September 2010.

Dexter is standing outside of his house, holding a crying Harrison. The police arrive and Dexter refuses to hand over his son. Debra runs up and orders the police to back off. She takes Harrison and asks what happened. Dexter only says, "Rita's inside. It was me." Deb looks confused.

Inside the house, Masuka and Quinn examine the crime scene. Masuka suggests that it’s Trinity’s M.O., due to a single cut to the femoral artery which caused Rita to bleed out in the bathtub. She is determined to have been dead for eight to twelve hours. Lt. LaGuerta orders the team to clear out because the FBI is in charge of the Trinity Case. The team bristles at this. When an FBI agent tries to question Dexter, Debra tells him that “FBI” stands for “fucking bunch of idiots.” LaGuerta orders Dexter to go home and instructs the agent to make an appointment to interview him.

Debra takes Harrison and Dexter back to her apartment, since they couldn’t stay in the house. She advises Dexter not to say things like “it was me.” He just lies on the bed, not saying a word.

At the station, Batista catches Quinn, Yale, Masuka, and Sgt. Lee listening to Dexter's 911 call. Quinn says it sounds like he's submitting a lab report when his wife just died. Batista thinks Dexter was just in shock. Quinn notes that the next door neighbor was more broken up than Dexter at Rita's death. LaGuerta approaches and angrily reminds them that it’s an FBI case. Quinn is intrigued when Masuka tells him that he saw Rita and the neighbor kissing on Thanksgiving, and Dexter knew about it.

Dexter’s ringing phone wakes him up. It’s Paul’s mother, Maura, calling from an Orlando theme park. The kids are with her and, when Astor asks to speak to her mother, Dexter lies that she’s in the shower. Before he hangs up, he tells Maura to bring the kids to the apartment, not the house. Debra asks him why he didn’t tell them about Rita. Dexter says he wants them to have one more good day.

Debra, carrying Harrison, accompanies Dexter to a funeral parlor. The director greets them with," I'm sorry for your loss. My sincere condolences." Dexter thinks, How does he do that? He sounds like he actually means it. After they’re seated, the director says it’s important to make decisions about how Rita will be remembered. He starts with the obituary and tells Dexter that it’s a chance for him to express his feelings about Rita in his own words. Suddenly, Dexter excuses himself and leaves the room. This surprises Debra and the director, but then she makes the arrangements for him.

Meanwhile, Dexter wanders the funeral home, struggling to understand how "normal" people react to death. No Hefty bags, no diesel fumes. He notices a widow sobbing at her husband’s casket and thinks, This is what she would have wanted -- a grieving spouse...for once doing what a person’s supposed to do.

In a flashback, Rita and Dexter meet for the first time on a blind date. He’s already seated in the restaurant when she arrives late. They introduce themselves and Rita asks how he found such an out-of-the-way spot. He replies that he “tracked it down.” It’s obvious that Dexter chose this particular place because he’s stalking a guy sitting at another table. Rita remarks that his sister has told her so much about him, and he asks if she omitted the fact that he’s an ax murderer. While Dexter focuses on his target, Rita talks about the menu choices.

Debra finds Dexter in another room in the funeral parlor, observing a grief-stricken family. When she asks if he was thinking about how much he misses Rita, he agrees. However, he was actually thinking about how much he lied to her from the very beginning. Debra informs Dexter that the funeral is the day after tomorrow, and she’s chosen an oak casket and white roses.

The FBI releases Dexter’s house as a crime scene, and Quinn helps Debra clean up the blood in the bathroom. While finishing up, Debra begins to cry and Quinn hugs her. To his surprise, she kisses him. Things get heated, and they take off each other's clothes, leading to sex on the floor.

Astor and Cody return from a trip to Disney World with Paul's parents, and Dexter reluctantly answers the door. The excited kids greet him and Cody places a Mickey Mouse hat on Dexter’s head with his name on it, and then presents one for Rita, too. Astor looks around for her mother, but she’s not there. After telling the kids that he has bad news about their mother, he recounts how a man broke into their house and killed her. “I’m sorry for your loss,” he says, repeating the funeral director's words.

Astor becomes emotional, pulls off Dexter’s hat, and storms out of the apartment. Dexter finds her sitting on the curb and offers comfort. However, Astor angrily accuses Dexter of not caring that her mother is dead, and blames him for not protecting her. She states that the family would have been better off if her mother had never met him.

After Quinn and Debra have sex, she grabs a selection of Rita's dresses for Dexter to pick one for the funeral. As they leave the house, Quinn asks Debra if she wants to talk, but she angrily brushes him off and drives away. Before he leaves, Quinn speaks to the next-door neighbor, who recounts the incident where Dexter punched him for kissing Rita.

Dexter is watching Harrison sleep when Debra arrives at the apartment with Rita’s dresses. The place is quiet because Cody and Astor are at a hotel with their grandparents. Dexter blames himself that Rita is dead, but Debra retorts that she’s dead because of Trinity. Silently, he regrets not killing Arthur at his first opportunity. Debra tells Dexter that Rita felt lucky to have him.

In another first-date flashback, Dexter excuses himself from the table when the man he's been watching leaves. Out in the parking lot, Dexter drugs him and shoves the guy inside the trunk of his car. Returning to Rita, Dexter apologizes for having to leave, claiming to have a stomach bug. He’s quickly out the door, as Rita sits alone.

Back to the present, Dexter whispers to Harrison, “Lucky to have me. I wouldn’t say so. She trusted me, and now she’s dead.” He touches one of Rita’s dresses. “Like your sister says, I’m toxic. You’d all be better off without me.”

The next morning, Dexter shreds his computer files in an effort to delete the past and leave nothing behind. While Debra talks about what still needs to be done regarding the funeral, Dexter just thinks about grabbing his tools, torching his storage container, and topping off his boat’s fuel. Debra reminds him that he has to be debriefed by the FBI. Dexter brings up Harrison’s future, and says he needs a decent person in his life. When she insists that Dexter is “decent and good,” he replies, “I’m not.”

Meanwhile, Quinn can't let go of Rita’s murder case, even when LaGuerta reminds him that it's in the FBI’s hands. She asks what he’s implying when he tells her that Rita and Elliot had a “mini-fling” and Dexter found out about it. Quinn says, “Look, if this were anyone but Dexter, we’d at least be thinking like detectives… What do you always say? When the wife is dead, 90% of the time, the husband did it.” Just then, LaGuerta takes a phone call and dismisses Quinn.

While Debra is picking up canvas prints for the funeral, LaGuerta calls to inform her that Dexter didn’t keep his appointment with the FBI. Upset, Debra hurries home, bursts through the door, and sees an unknown woman feeding Harrison. "Who the fuck are you?" Debra asks, to be told that she lives downstairs. Debra tries calling Dexter from the bedroom, but he doesn’t answer.

At the funeral home, Dexter speaks to Rita as she lies in her casket. He explains that he chose that dress because she was wearing it when they first met. He says he doesn't deserve to be at her funeral, and will leave the kids with Deb. He admits to never being honest with her, confesses that he's a serial killer, and apologizes for pretending to be a normal human.

Dexter decides to leave his life and son behind. He removes a suit of clothing, his kill tools, and the blood slide box from his storage unit and sets it on fire. As he heads out on his boat, he thinks, I’ve disappeared so many people. My turn now… to disappear myself.

People begin gathering at the cemetery for Rita's funeral, and an impatient Debra wonders why Dexter isn’t there. He ignores her calls.

While Dexter’s at the wheel of his boat, he remembers a phone call from Rita (shown in flashback). As he’s dumping Marcetti’s remains off the side of his boat, Rita phones to ask if he’s feeling better. She confesses that she wasn't completely honest with him, and reveals that she has two kids. However, Dexter says that he already knows and he likes kids. They decide to meet again.

Dexter stops at a dockside fueling station to buy gas. When he enters the store, he sees an angry man repeatedly dinging the service bell, demanding the key to the bathroom. When nobody comes, the man searches the desk until he finds the key. Turning around, he takes offense at Dexter staring at him, and calls him a “fucking retard.”

Despite his better judgment, Dexter follows the man into the bathroom and picks up an anchor. Looking grim, Dexter states, "I've had a bad week. My wife died, and it was my fault." However, the man doesn’t care and he responds in a sarcastic tone of voice. "Well, I'm real sorry for your fucking loss, but your dead wife can suck my dick!" An enraged Dexter attacks him and beats him to death with the anchor.

As Dexter backs away from the man’s bloodied body, “Harry” appears in the restroom mirror. He tells Dexter that it was the first human thing he has done since his wife's death, and says it’s okay for him to show what he is feeling. Dexter begins to whimper and groan, then shriek and scream, from anger and grief over losing Rita. “Harry” tells Dexter that his family is not better off without him and he needs to go back.

At the cemetery, Quinn is about to tell Debra about Elliot when Dexter finally shows up. While Dexter is giving a heartfelt eulogy, he realizes that he loved Rita.

Deb orders cops to back off

Rita being removed from house

Maria takes calls from the press

Quinn is suspicious of Dexter's 9-1-1 call

Dexter receives call from Maura and kids; doesn't tell them about Rita

Deb and Dexter meet with a funeral director

Dexter, wearing hat from the kids

Dexter reveals that Rita was murdered

Astor runs out of the apartment

Deb refuses to talk after sex

{flashback) Marcetti is captured by Dexter

Dexter leaves his life and son behind

Deb and Quinn at the cemetery

Dexter bludgeons Rankin to death with an anchor 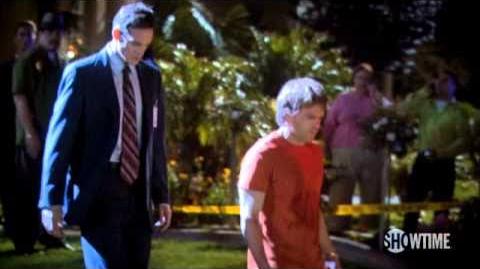 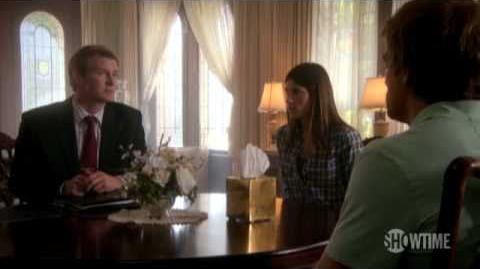