Melissa Rosenberg
Crocodile is the second of twelve episodes in Season One of the Showtime series DEXTER, and the second overall episode of the series. It first aired 8 October 2006.

The Miami Metro Police Department investigate the murder of an undercover officer, while Dexter stalks another victim. Debra discovers a piece of evidence in the Ice Truck Killer Case that helps her get a promotion.

Dexter has taken a little time off to take his boat out and relax. He watches some teenagers messing around and notes that playing comes easier to them than to him.

Dexter attends court to give blood report testimony against a criminal. While leaving, he notices a crying family and sees what he describes as an "opportunity". He enters a court case where Matt Chambers is on trial for manslaughter, for drunkenly running over eighteen-year-old Alexander Pryce with his car. The court is adjourned and Dexter travels to a crime scene just outside Miami.

Dexter examines the body and tells LaGuerta that it originated from the Westbound Causeway, after which he notices that the victim has something in his mouth. After a death rattle spurts blood into his face, Dexter removes a piece of human flesh from the victim's mouth.

Later, back at the station, Debra tells him about her new boyfriend, Sean, a mechanic, and Dexter offers to meet them for lunch along with Rita, and Debra skeptically agrees.

After finding out that the dead man under the causeway was a police officer named Ricky Simmons, James Doakes and Lt. LaGuerta go to make a next-of-kin notification when they find Kara Simmons shot in her home. The homicide team arrives to the house and Dexter takes snapshots of the scene, where he notices an inconsistency in the blood and finds a cell phone.

Dexter stops at Rita's house and tells her about his double date plan, telling her that it was Debra's idea.

At home, Dexter is awoken when Debra phones and tells him that she has found the Refrigerated Truck. She calls the team in and they find human fingertips inside an ice block in the back compartment. The truck is searched and found to be spotless. Later, back at the MMPD (Miami Metro Police Department), they melt the ice and find that the fingertips have differently colored fingernails.

The skin found in Ricky Simmons' mouth is thought to be from Norberto Cervantes, whom Doakes and his team apprehend while he is meeting with Carlos Guerrero.

The Matt Chambers case starts up again and he is put on the stand and Matt tells the court that he reported the car stolen hours before Alexander was hit by it and that he has been sober for several months.

Meanwhile, Doakes and LaGuerta interrogate Cervantes who tells them that Ricky's wife Kara was sleeping with another man. Doakes punches him. María takes a blood sample from his arm to confirm that it was him.

Reconstructing the scene of Kara's shooting, Batista and Dexter find blood which turns out to be a 100% match for Cervantes. María stops Doakes from doing anything about it and tells him that they should look at the big picture and try to get Guerrero.

Dexter stalks his potential victim Matt Chambers to a bar and strikes up a conversation. He finds out that Chambers has moved around from place to place for years. Dexter takes his whiskey glass to lift the fingerprints. After running them through a database, he finds that Chambers has killed or injured people while driving drunk in Santa Fe, New Mexico, and South Boston under the aliases Matthew Brewster and Matt Rasmussen. Dexter then prepares his kill room.

Doakes visits Kara Simmons in the hospital and María notices that he is being overly caring.

Dexter attends the double date with Rita, Debra and Sean. When Rita notices the apparent ease of Debra and Sean's relationship, she starts to feel insecure and Dexter notes his loss for words to comfort her.

Norberto Cervantes is killed in jail by a guard.

Later, Rita starts to kiss Dexter but pulls away from him when it starts getting too sexual. Dexter tells her that he is fine with them not having sex until the time is right for them and she replies that he is a truly decent man.

Dexter examines the dead fingertips and discovers that they were removed postmortem, Debra tells him that the prostitute's name was Sheri Taylor. Debra, at the command of Captain Matthews, is told by LaGuerta that she is being promoted to the Homicide department, although still an officer, not a detective.

LaGuerta tells Doakes that Kara Simmons died of heart failure and voices her suspicions that he was sleeping with her. He confirms it and says that she was going to ask Ricky for a divorce. As a personal favor to Doakes, she refrains from taking him off the case because he tells her that no one is more motivated than him to get justice.

While stalking Matt Chambers, Dexter gets a text message from Debra to celebrate her promotion and she tells him that she dumped Sean because he was married. Dexter thinks back to the time when Harry was late picking him up because he was angry at the decision to let the man who killed his partner walk. He sees Guerrero going to the restroom and he contemplates killing him, but decides against it.

Dexter kidnaps Matt Chambers and forces him to confess to killing Alexander Pryce. He then kills him by stabbing him in the heart. He empties the man's remains into trash bags and returns home after throwing the body parts into the ocean. He finds the doll head back on his fridge door, but when he opens his freezer, he discovers that the doll's body parts are missing. He realizes the Ice Truck Killer has broken into his apartment for a second time.

LaGuerta: "How's Nina and your daughter?"
Batista: "They're marvelous."
LaGuerta: "You know they need you too, eh?'
Batista: (Small nod, says nothing)
LaGuerta: "Angel, go home." 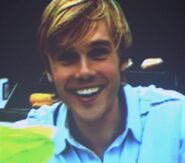 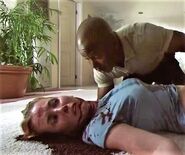 Fingertips inside a block of ice