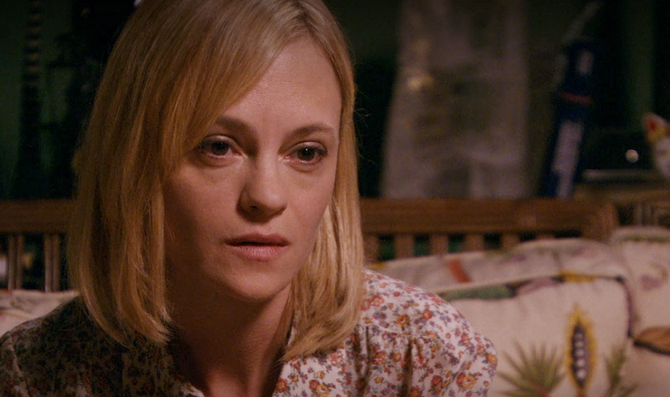 Emily Birch is a character in the Showtime series DEXTER.

She is a woman connected to Jordan Chase and the Barrel Girl Gang as a whole. She is the group's first rape victim, and one of only two to survive.

Emily is about year older than her rapists and fits the features of every victim they've targeted: blonde with brown eyes. She wears reserved clothing and has mid-length hair.

Emily has a wounded personality. Having suffered the traumatic experience of being gang raped twenty years ago, she has had to live with the memory of what happened to her. Her record shows that she was arrested several times for moving violations, and is currently on probation for DUI.

She's very protective of herself, keeping her house barred and secure. When first approached by Dexter and Lumen, she is visibly nervous and has a defensive attitude.

When shown with Jordan Chase, she appears to wish for more than a platonic relationship with him. Although Jordan doesn't have romantic feelings for her, he does feel a special bond because she was his first victim. Jordan takes advantage of Emily's feelings for him, and manipulates her to draw Lumen Pierce and Dexter Morgan to her house.

Twenty years ago, while she was a young camp counselor-in-training at River Jordan Camp, she met five teen boys. She felt sorry for one of them named Eugene Greer (later, known as Jordan Chase), and they formed a friendship. However, one day while she and Eugene were out walking, she blacked out. Emily believed that she may have been drugged. She woke up in a cabin, with her clothes off, and tied to a bunk bed. Eugene didn't touch her but he goaded the four others to rape her, telling them to, "Seize their desires." While she was being raped, Emily said that a certain look came over Eugene's face that never went away. After she got dressed, the group forced Emily to take a picture of the five of them. Twenty years later, the photo was found by Dexter Morgan in Cole Harmon's house.

Dexter Morgan begins sessions with Jordan Chase to have opportunities to find evidence of his crimes. He notices that Jordan's necklace has a vial of blood attached to it. Dexter schedules another session for the following morning, intent on taking a sample to process for its identity. Eventually, he gets his chance to take a blood slide while Jordan is in the shower. However, after he leaves, Jordan realizes that his locker door is ajar and discovers a spot of blood on his finger when picking up his necklace. He immediately suspects Dexter and targets him for his own purposes.

Dexter takes the sample back to the lab, meeting up with Vince Masuka. He lies to Masuka that the sample is for a homicide victim that he had forgotten about. Dexter is alarmed when his stepdaughter, Astor Bennett, disappears with her friend, Olivia. Dexter assumes that his tampering with the blood sample has caused Jordan to actively seek out his family. He instantly believes Barry Kurt to be one of Jordan's men, but this turns out to be false.

After Dexter figures out that the sample belongs to Emily Birch, Dexter and Lumen pay a visit to Emily's house, only to get no answers from her. When presented with a picture of the suspects as young men, she clearly shows fear.

Lumen later returns by herself, carrying the photo and a video of her own torture, hoping to get Emily to open up. The two sit down on her sofa and talk, with Emily explaining the photo. She acknowledges knowing the five boys from summer camp, long ago. She reveals that Jordan Chase's real name is Eugene Greer, saying that he was a heavyset teenager who inspired the rest of his friends to rape and torture her. Afterward, they told her snap the picture of them together as a memento. Along with this information, she gives Lumen the identity of Alex Tilden, the last unknown person in the photo.

Later, Emily is shown talking with Jordan and it's disclosed that he had asked her to tell Lumen the truth about the rape.

At Jordan's request, Emily attempts to lure Dexter and Lumen to her house, saying that she needs their protection because Jordan somehow knows that she talked to them. Lumen arrives alone at Emily's house (at the time, Dexter is being kidnapped by Stan Liddy). Emily insists that she needs both of them there. Lumen becomes suspicious that it is setup and attempts to leave, but Jordan shows himself, which terrifies Lumen.

When Jordan discovers that Dexter is not present, he questions Lumen about his whereabouts but she has no answer. Meanwhile, Emily keeps annoying Jordan and he orders her to shut up. He then loses control and angrily beats her to death with a fireplace poker, to Lumen's horror. He orders Lumen to go with him or face the violent death that Emily just suffered. When Dexter finally arrives at Emily's house, he finds her dead, with Lumen and Jordan missing.

Emily and Lumen talk about being raped