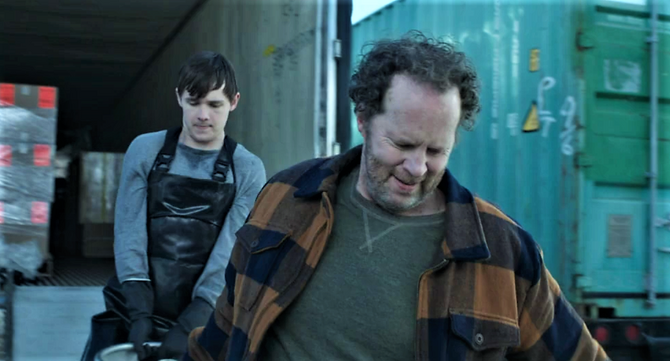 He is a truck driver employed by Kurt Caldwell, who also carries out various other tasks.

At the Gramercy Suites in New York City, Molly Park and Angela Bishop ask the front desk clerk to confirm that Matt Caldwell is a guest. However, when they view footage of "Matt Caldwell" checking out the night before at 11:30 p.m., Angela and Molly don't recognize the man. Angela plays it off by telling the clerk, "You're right. There he is. All checked out. Sorry to bother you with this, sir. Molly snaps a picture of the man (Elric).

After Harrison washes Elric's truck, Elric pays him $20 to help him move some cargo. Afterward, Elric gives Harrison a blank envelope to give to his dad. Inside is a titanium surgical screw.

Later, Dexter searches Kurt’s office at the diner for the second screw but instead finds a check for $5,000 to someone called Elric Kane.

At the end of the episode, Elric sneaks up behind Dexter and attacks him.

Elric drives with Dexter in the back seat, passed out. Dexter dreams about Harrison beating and killing some wrestlers at his school, while smiling and laughing. In the dream, Dexter is upset and closes his eyes. Dexter wakes up and realizes his hands are tied together.

Kurt calls Elric and he confirms he got the job he wanted done. He hangs up and Dexter chokes him and their car crashes into a pole. Dexter manages to untie himself but Elric gets out of the car with a gun. He shoots Dexter in the leg but Dexter keeps running.

Elric follows Dexter's bloody tracks, intended to make him believe Dexter crossed the stream, and he screams out "oldest trick in the goddamn book", not falling for Dexter’s trick. Jim runs towards a summer camp, leaving an intentional trail of blood behind, and Elric follows.

Elric searches around the camp, realizing that Dexter grabbed a knife to fight with. Dexter jumps out through a mirror and holds a knife against Elric’s throat. Elric gives up that Harrison is at Kurt's cabin and that Elric was just doing his job- "nothing personal". Dexter stabs and kills him. He takes his hat and jacket and covers his body up with a tarp.

After Harrison goes to sleep, Dexter returns to the summer camp to deal with Elric's body. As he lays out his tools, imaginary Deb reminds him that Harrison will have more questions. Amused, she mentions how screwed up it is that he watched his mother get chopped up and now he does the same to his victims. Dexter remarks that Harrison deals with his trauma by arming himself with a straight razor, the same weapon used to kill his mother. Then, he cheerfully exclaims, "We are what we are," before cutting into Elric's frozen body. Presumably, Dexter disposes of the remains in the local incinerator.

Elric is dismembered
Community content is available under CC-BY-SA unless otherwise noted.
Advertisement