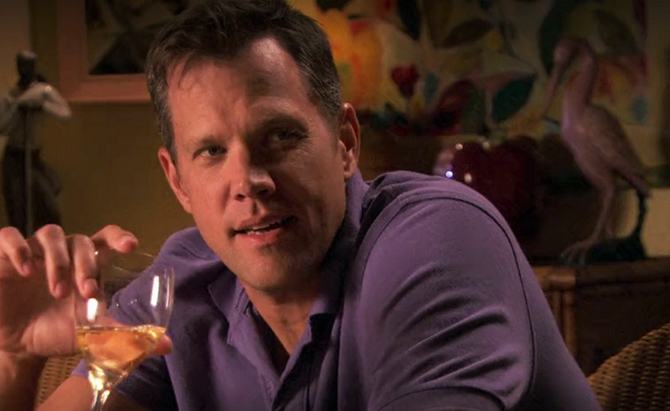 Following their wedding, Dexter and Rita move to Kendall into a house next door to Elliot.

Elliot Larson is a tall, nice-looking man of average build.

Not much is known about Elliot's early life. He has two children, and his fiancée's name is Kate.

Sometime after the Morgans move into the neighborhood, Elliot and Kate, his live-in fiancée, start to have problems. Dexter and Rita can hear them loudly arguing. Rita tells Dexter it's better they find out now they're not happy before they get married. Eventually, Kate moves out. Elliot alone raises his children.

Much to Dexter's annoyance, Elliot starts to spend more time at his house with Rita, Astor, and Cody. In time, Elliot develops a romantic interest in Rita. During Thanksgiving, he kisses her, which is witnessed by Vince Masuka. When Dexter learns from Rita and Masuka about the kiss, he punches Elliot in the face.

After Rita's death, Elliot is interviewed as a potential witness and suspect, but he is cleared.

Elliot tells Joey Quinn that Dexter punched him because of Rita.

While Dexter is packing up his house, Elliot apologizes to Dexter for kissing Rita. Dexter, holding a kitchen knife, momentarily considers stabbing Elliot.

Later, Elliot meets Lumen Pierce during the brief time that she stays at Dexter's unoccupied house.

Dexter is tempted to stab Elliot
Community content is available under CC-BY-SA unless otherwise noted.
Advertisement