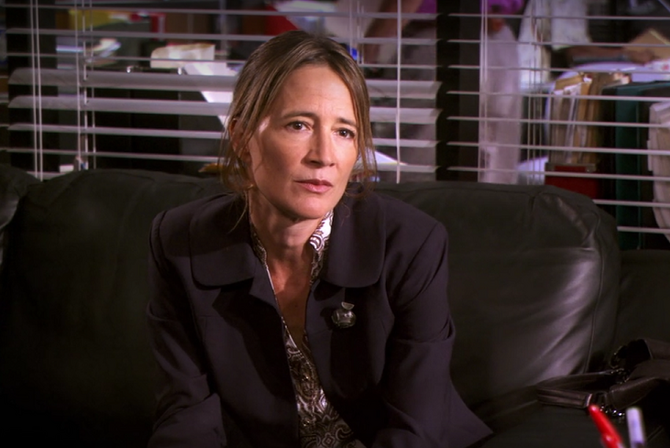 Ellen Wolf is a character in Season Three on Showtime's series DEXTER.

She worked as a defense attorney and was Miguel Prado's main rival. Ellen knew that Miguel would often bend the rules to put innocent people in prison, while Miguel believed people like Ellen were at the root of problem that guilty people went free.

Ellen was 5'8" tall with brown eyes and weighed approximately 125 lbs. Her hair was medium-brown and fell past her shoulders.

At times, Ellen came across as an arrogant and unpleasant person. Despite the respect she earned from her reputation as a skilled defense attorney, there is no evidence that she had friends other than Maria LaGuerta, a person she developed a good relationship with. The fact that Miguel believed that her murder would be blamed on "one of her scumbag clients" suggests that generally they did not like her, either.

Ellen had no problem with making her strong dislike of her rival Miguel Prado perfectly clear. When Dexter met her for the first time, she (despite his politeness) casually threatened his credibility. While smirking, she claimed that she could convince the jury that Dexter had planted the forensic evidence against her client and declared that he "looked like the type." Clearly offended, Dexter thought to himself, "Do I see sheets of plastic in your future?" ("Easy as Pie")

Ellen did, however, have a kinder side, and showed it when she was alone with her friend, Maria. They first became friends when Maria provided evidence that proved that a client of Ellen's was innocent. From that moment, as much as Maria disagreed with Ellen's warnings about Miguel. for the most part, Ellen and Maria enjoyed each other's company. The two were so close that when Ellen was murdered, while everyone else was sympathetic but not terribly upset, Maria was devastated and broke down in tears. Upon realizing that Miguel was Ellen's murderer, Maria was determined to find evidence against Miguel and bring him to justice, which caused him to attempt to kill her, too.

Miguel viewed Ellen as a completely selfish person who cared only for the money she earned from her job and was willing to let murderers walk free and endanger the public. He did not think of her as an "innocent" person and reacted angrily when Dexter referred to her as this in a conversation regarding her murder. However, the fact that she betrayed Albert Chung, a client of hers who was unquestionably guilty of the murders he had been accused of, suggested that Miguel's assessment of Ellen was incorrect. She may have believed that her other clients (the ones she did not betray) were innocent but, regardless, she proclaimed that everyone deserved a fair trial, and that she would even defend Miguel.

Ellen was first seen outside a courtroom after her client Chicky Hines was sentenced, although Lieutenant Maria LaGuerta had given Miguel a witness that proved Hines' innocence. LaGuerta then went to Wolf's house and gave her the evidence that could exonerate Hines. This led to them to becoming friends, even if LaGuerta initially couldn't accept Wolf's negative attitude towards Miguel. Later, Maria had reason to believe Ellen's accusations that Miguel engaged in illegal tactics - missing evidence, witness intimidation, and jury tampering.

After a man named Albert Chung killed a young college valedictorian, Miguel informed Dexter Morgan that he was Wolf's client and that Wolf had set Chung free after he pushed an old lady down stairs, killing her. Miguel wanted them to kill Wolf, but Dexter was reluctant and told Miguel that she was only doing her job. Later, during a meeting in LaGuerta's office to discuss Chung's surrender terms, Wolf engaged in a heated argument with Miguel, in the presence of Dexter and Maria. Later, Wolf decided to betray her client and, with her help, the police arrested Chung. When Miguel learned of this, he admitted to Dexter that he may have been wrong about Wolf.

Later, Wolf accompanied LaGuerta to a police convention. After that, they visited a bar where she flirted with the bartender, Toby Edwards. That night, when Wolf was at home alone, she was visited by Miguel Prado who murdered her and buried her body in a cemetery's open grave. The next day, when LaGuerta couldn't reach her, Dexter became suspicious, broke into her house, and realized what Miguel had done. Dexter then searched the cemetery and uncovered her body to teach Miguel a lesson. He also removed any potential evidence of the killer's identity.

Ellen's corpse
Add a photo to this gallery
Retrieved from "https://dexter.fandom.com/wiki/Ellen_Wolf?oldid=99479"
Community content is available under CC-BY-SA unless otherwise noted.