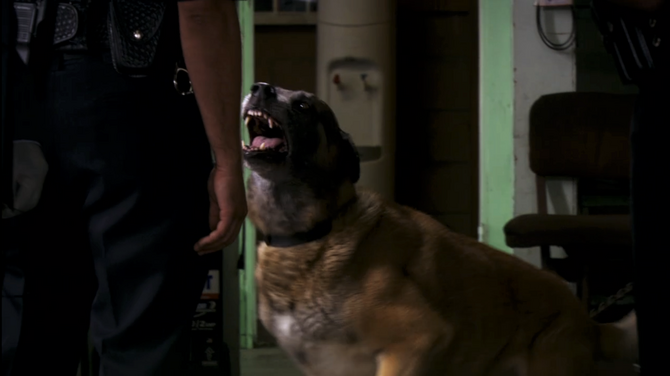 Guard dog
Eli is a canine character in Season Six of the Showtime series DEXTER.

He is a large, mixed-breed dog who guards Brother Sam's body shop.

When Dexter Morgan stalked Brother Sam to his body shop one night, Eli started barking furiously at him until Sam called him off. Eli almost received the M99 that Dexter was planning to use on Sam.

Eli was a witness when Brother Sam was shot in his garage after which Eli went to stand near Sam without barking at the shooter.

At the crime scene, Eli kept loudly barking loudly at the police, causing an annoyed Detective Mike Anderson to order the dog taken outside.

When Dexter attended the Candle Light Vigil for Sam, Eli barked at Dexter until Nick, a mechanic, quieted him.

Later, footage of Sam's shooting was found, and Dexter noticed that Eli was not barking. He knew that Eli barked at almost everyone except Nick and Sam. He realized that Nick was the shooter, and it was confirmed by both Sam (before he died) and Nick (before Dexter killed him).

Brother Sam (after being shot) and Eli
Community content is available under CC-BY-SA unless otherwise noted.
Advertisement