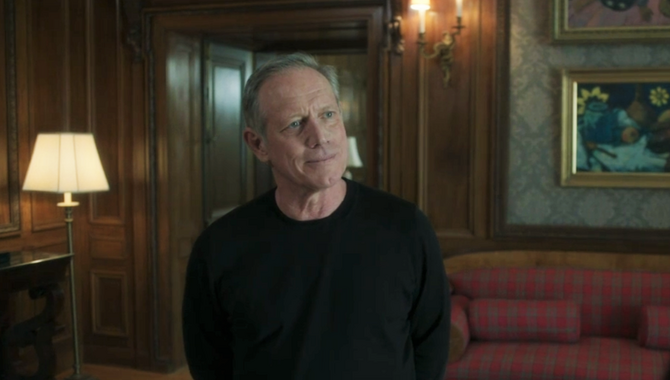 He is an oil tycoon whose company negatively affects the environment.

As Jim (Dexter) and Ramon are chatting outside a store, they notice a helicopter flying overhead. Ramon remarks, "Edward Olsen heading up to his chalet. Rich asshole season begins now."

The next day, Dexter walks over to Iron Lake Tavern on his lunch break, passing through a group of student protestors who are holding signs, pounding drums, and shouting, "Drilling is killing! Save the planet! Shame on you!"

Angela notices her daughter, Audrey, and reminds her that she has a test at school. Audrey retorts, "What good's math if people like Edward Olsen destroy the planet?"

Olsen walks out of the tavern and addresses the protesters, "Thank you, everyone, for waiting so patiently. Sorry, my meeting ran long. We brought you some, uh, cocoa to warm you up. Please, enjoy. It's encouraging to see young people with such gusto. I mean that. You keep fighting for what you believe in, guys. That's what makes this country great, right?"

Audrey takes a cup of cocoa and deliberately spills it on the ground in front of Olsen. He glares at her while she smiles.

Angela drives up to the gate at Olsen’s mansion. The intercom buzzes and a man asks if she has an appointment. She shows her badge and the gate whirrs open.

Inside, as Angela is gazing at a painting on the wall, Olsen walks up behind her and asks, “Beautiful, isn't it?” He’s surprised that she knows its name - Gauguin's A Farm in Brittany. At first, Olsen thinks she’s there to apologize about the protest. Angela, though, says a hunter disappeared in the woods last night and they’re searching by foot, but have over 100 square miles to cover. He agrees to let them use his helicopter, adding that his pilot was an Army Ranger and knows the area. Angela thanks him.

Olsen asks if the young woman leading the protest was her daughter. Defending himself, he says, “Unfortunately, her generation sees the world only in binary terms. Black and white, good and evil. And that, uh... climate change-denying oil baron persona that people are all too happy to pin on me, it ignores all of the good I do. All of my charity work, including to the Seneca people. The supplies I donate every year to keep that, uh, reservation medical clinic running, the food during the holidays.” Angela says, "It’s very much appreciated," and leaves.

Audrey is giving Harrison a ride home when her radiator hose splits. She says she knows how to replace it, explaining, "My mom's paranoid about everything. Made me learn how to change a tire as soon as I got my learner's permit." There are no bars on Audrey's phone so she asks Harrison to walk down the road and call Jerry's Auto Shop. She hands him her phone which has the number.

While Harrison is gone, Olsen sees Audrey pulled over to the side of the road. He stops and offers to give her a ride, but she refuses and says her friend will be back soon. Olsen asks if she wants to wait in his warm car, mentioning sodas and T.V.

Audrey answers, "I know who you are, Mr. Olsen. I know the tonnage of CO2 your chemical plants release every year. The millions you've spent fighting climate science. Want to be helpful? Stop fucking up the planet."

Olsen calmly replies, "Oh, my. You know, I find it funny that you hate me so much, and here you are driving this old gas-guzzler. Some might consider that hypocritical, but I don't. People are complicated. Life's complicated. One day you'll understand how the world really works. You have a good day, Audrey. Stay safe."

Harrion returns as Olsen is leaving. He asks what that was about, and Audrey says, "Just Edward Olsen being a billionaire."