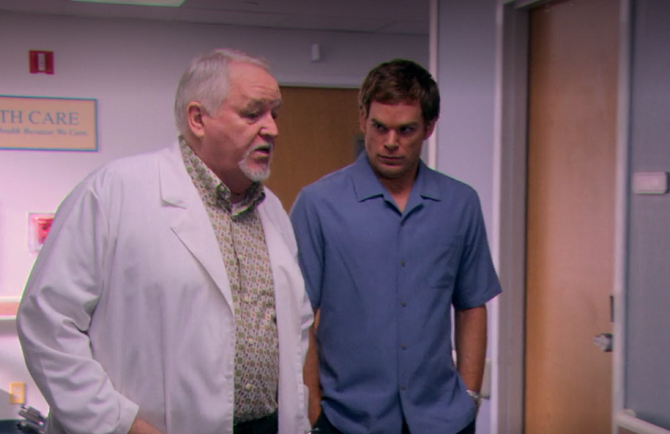 Dr. Pittman is a character in Season One of the Showtime series DEXTER.

He is a medical examiner who shows Dexter Morgan the body of Joe Driscoll, his biological father.

Dexter arrives alone at the morgue and meets with Dr. Pittman

Dr. Pittman: "I gave Joe a physical once a year, like clockwork, so no history of heart disease, but it happens."
Dexter: "It appears so."
Dr. Pittman: "We were about to send him to the Crematorium when we found you. We thought his son should have a chance to pay his last respects."
Dexter: "I'm not his son."
Dr. Pittman: "Estrangement in a family is a shame, but Death is the great unifier."

Dr. Pittman wheels the corpse of Joe Driscoll out on a gurney. Dexter nods, and the doctor pulls the sheet back. Dexter leans down close to look at the face. Then he goes around to the other side of the body and examines a tattoo covering his right elbow and part of the arm.

Dexter: "Huh. That’s an interesting tattoo."
Dr. Pittman: "Joe said he'd picked that up in Nam. You can be proud. He was a patriot!"
Dexter: "Uh, perhaps. He was also an ex-convict.
Dr. Pittman: Excuse me?"
Dexter: "It's a prison tattoo. It’s done with a pen and ballpoint ink. It’s three or four decades old, judging by the fade."
Dr. Pittman: "Son, I knew Joe. He was no ex-convict. He was a good man, a quiet man, and a damn good bowler."
Dexter: "How did you determine cardiac arrest? Was there damage to the coronary artery?"

Dr. Pittman glares at him.

Dexter: "It’s, uh, professional curiosity. I work in Forensics, down in Miami."
Dr. Pittman: "I see. Well, uh, I found micro-aneurysims in the retinas. It’s common with seizures during a heart attack."
Dexter: "It's also a sign of diabetic retinopathy."
Dr. Pittman [condescendingly]: "Son, I may be a small-town doctor, but I know a heart attack when I see one. Who knows what caused it - stress, inactivity, French fries? But knowing won’t bring him back."

Dexter looks down on the tattoo again and suddenly hears a song, drowning out the voice of Dr. Pittman. It's Creedence Clearwater Revival, singing "Have You Ever Seen The Rain?" Dexter flashes back to when he was a young boy, and sees a man’s arm with the same webbed tattoo as on Driscoll's arm. The music in his head fades and Dexter begins hearing Dr. Pittman's voice.

Dr. Pittman: "It's hard to accept so many unanswered questions, but sometimes..."

Dexter raises his hands to his face in apparent sorrow.

After Dr. Pittman leaves the room, Dexter secretly takes a sample of Joe Driscoll’s blood to see if their DNA matches. The test confirms that they are father and son.

Dr. Pittman
Add a photo to this gallery
Retrieved from "https://dexter.fandom.com/wiki/Dr._Pittman?oldid=108579"
Community content is available under CC-BY-SA unless otherwise noted.