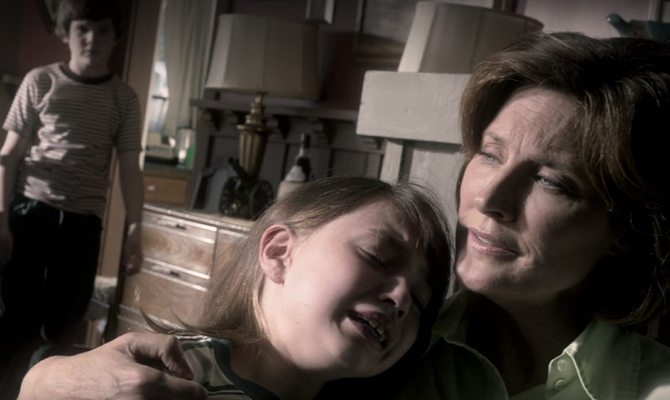 Doris Morgan is a character in Showtime's series DEXTER.

She is Dexter Morgan's adoptive mother, and Debra Morgan's biological mother. She died of cancer when Debra was sixteen.[1] She and her husband were good friends with Gene and Camilla Figg and often played bridge together partnering with Camilla and "took [their husbands] to the cleaners."[2] Debra and Dexter recall visiting Doris's sister in Myrtle Beach, South Carolina. ("Swim Deep")

(Flashback) Doris is seen posing for a family picture taken on Petrie Beach when she breaks up a verbal spat between Deb and Dexter. She affectionally tussles Dexter's hair and calls him handsome. The same beach is one of The Ice Truck Killer's crime scenes many years later.

(Flashback) Doris urges her husband, Harry, to contact Dexter's biological father for a blood transfusion for Dexter after he is severely injured.

(Flashback) Dexter overhears a destressed Doris and Harry disagreeing and she insists there is something off about Dexter. Doris suggests that it would not hurt to have Dexter tested. With Harry's guidance, Dexter fools the testing child psychiatrist.

Dexter "envisions Harry" telling him how Ethan Turner chose to be rich rather than married. Harry, on the other hand, chose to stay with Doris, even after he cheated on her with Laura Moser.

Dexter visits a terminally ill Camilla Figg in Hospice and she gifts him a shoebox full of photographs from his childhood. Her late husband, Gene Figg, loved taking pictures and he documented every bridge game they played with Doris and Harry.

Dexter lets it slip to Deb that Harry cheated on Doris with a C.I. because she felt like failure compared to her father for sleeping with her own C.I. Deb then searches through Harry's old files, hoping to learn the C.I.'s name. This eventually leads to another C.I. that Harry cheated on Doris with - Valerie Hodges, After seeing Laura Moser's house, Deb reads an article about the Shipping Yard Massacre and learn that Dexter and Brian Moser are biological brothers.[3]

While dressing for his wedding, Dexter remembers when Harry first taught him how to tie a tie for his adoptive mom's funeral. "Harry" tells Dexter both his biological mother and his adoptive mother would be proud of him today.

Dexter unsatisfactorily answers the questions by Our Lady of the Gulf Preschool's Admissions Director about his religious beliefs, Deb tells him that she is not the most religious person in the world either and her mom practically had to drag her to church.

Deb reflects during her therapy session with Dr. Michelle Ross how she only attends church for funerals such her father, her mother, and her sister-in-law.

(Flashback) Harry demands that Doris return Debra's new puppy, Banjo, but doesn't reveal that is fearful Dexter might harm it. Debra doesn't know the reason why she has to give it up and Dexter almost tells her, but Harry stops him.

When Dexter wonders why Harry confided to Dr. Evelyn Vogel about him, she says that he had nobody else to talk about Dexter including Doris.

Dexter recalls his foster mom Doris as loving him. Dexter's sixteenth birthday was a rather restrained affair as Doris had recently died of cancer. She had been sick for years and go to sleep earlier and earlier while taking a lot of pain medication. Doris tried to get Dexter to attend church services when he was young but, after a couple of regrettable incidents, it became apparent that it was not going to stick, and Harry intervened. Dexter remembers proverbial phrases his foster mom would often say: