It features the training of Cody and Astor to be serial killers.

Dexter Morgan is a serial killer trained by his adopted father, a police detective, to channel his murderous urges through vigilantism, only killing other killers. The source of Dexter's blood lust and investigative prowess is a voice in his mind that he calls the "Dark Passenger".

At the start of the novel, Dexter, a forensic blood spatter analyst for the Miami Police Department, investigates a double homicide at the University of Miami campus. Two female students are found burned and beheaded. Their heads are replaced by the ceramic heads of bulls. Something about this murder uncharacteristically frightens the Dark Passenger into silence, leaving Dexter to solve the crime on his own. As a series of similar murders takes place, members of a mysterious cult begin stalking Dexter, believing his Dark Passenger to be a threat to them.

Dexter soon begins to question the dark voice that has been with him all his life, as he slowly realizes that his Dark Passenger is a true entity unto itself, possibly an offspring of the ancient god Moloch. While attempting to dispatch a killer who had been stalking him, Dexter becomes frightened and is unable to go through with the deed. He soon realizes that the Dark Passenger had given him an unusual amount of confidence and an almost supernatural awareness of the world around him; now that it is gone, he feels vulnerable for the first time in his life.

As the novel progresses, Dexter begins to develop emotions that were once suppressed by the Dark Passenger, mainly those of sadness and anger. While missing the helpful clues and hints of the Dark Passenger, Dexter feeds off of his new found emotions to find some balance in his life and to solve the mystery unfolding around him.

The story also concerns the training of Cody and Astor Bennett, Dexter's soon-to-be stepchildren. Traumatized by their abusive father, they have developed homicidal tendencies similar to Dexter's. Dexter intends to teach them the "Code of Harry", which his own adoptive father used to help him hide his dark nature and blend in with normal people. Cody and Astor are eager to learn, but Dexter informs them that they are not ready yet, and still have years of training left before they are able to inflict any real human suffering.

The novel concludes as the Cult of Moloch kidnaps Astor and Cody, thereby forcing Dexter to engage them head-on. However, the cult soon captures Dexter through a supernatural captivation of music. Though confined in a small concrete storage closet, Dexter escapes and encounters an old man who is the current avatar of Moloch. Though Dexter is instantly humbled and frightened of Moloch, he continuously mocks the malignant spirit, which in turn entrances him and the children and orders them to be sacrificed in a flaming pit. Dexter remains in a trance until his pant leg catches on fire; the pain of the burns snaps him out of it, and he opens fire on the cult members. A final showdown pits an armed Dexter against Moloch, who is clutching Astor and threatening to kill her. In a stalemate, Dexter is hesitant to act until Moloch reaches for his ceremonial knife only to find it missing; and then shudders to a halt and falls over with the knife lodged squarely in his back. Cody stands behind him holding Moloch's knife, saying, "I told you I was ready."

Dexter laments that having killed at such an early age, Cody's journey will now be more difficult. Weeks pass, and Dexter is left alone to accept life without his Dark Passenger. At his wedding, Dexter falls into a fit of despair as he thinks about how painful his life is going to be in its banality. Just then, the Passenger comes back to him, brought on by Dexter's immense suffering, and he is made whole again in the final paragraphs of the novel. 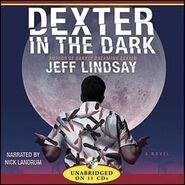