Dexter Slice of Life is a video game developed by Ecko Code for the social-networking site Facebook. The game is set to be released alongside the Season Premiere of Episode 601: Those Kinds of Things for Season Six, on October 2, 2011.

Not a whole lot of detail has been released on the gameplay, but based on footage from the official trailer [1], you will play as Dexter Morgan moving between his apartment in Miami and several local and secluded areas in Miami. The view is in the "Diamond" fashion, having characters move in each of the diagonal directions. Dexter is shown to always be in his kill attire, even when moving among normal citizens in public.

This game will emphasize stealth, tracking down targets and subduing them...though the extent of where that gameplay leads is unclear at the moment.

Below is an image released by Showtime, showing off the outside of Dexter's apartment as well as many of the resources that will be available (such as money, what appears to be doses of Etorphine, possible action points, etc.) and buttons that suggest inviting friends and other options. 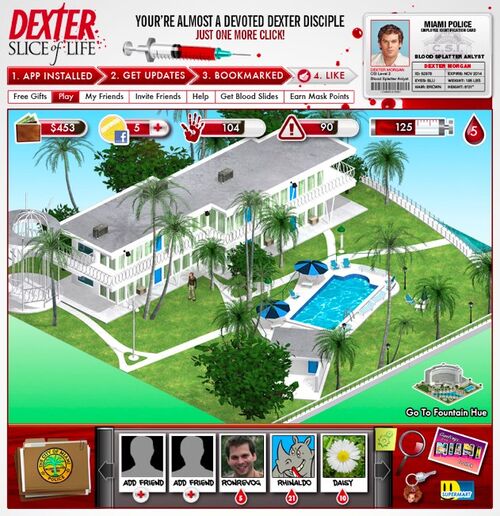 The trailer also details 3D graphics, which may be used for cutscenes where Dexter kills a victim.

Dexter Slice of Life is a point-and-click Sims style game though the player does not have to wait for Dexter to walk along a path to reach where you clicked. Actions are determined by your "Mask" meter, with some actions requiring 10 points and others requiring 20...the meter itself has a hundred points available and refills a varied number (possibly level dependent) every real-life minute. That being said, it's wise not to click on everything you see otherwise you may not have points to do something later such as kill a victim.

The game follows alongside the plot of Season Six, adding some background and other challenges alongside the main plot. There are some differences, to better fit it with the challenge of a game but overall new content is released as the series releases new episodes.

The game will follow alongside Season Six, apparently set to mirror each episode. If this is the case, then players will have an opportunity to act out key portions of each episode while stalking victims. The game may also provide further insight into critical plot details for that episode.

So far, only Dexter Morgan has been confirmed, though if it mirrors the episodes in Season Six. We are likely to see Debra Morgan, Angel Batista, Joe Walker, Professor James Gellar, Travis Marshall, and more.

Retrieved from "https://dexter.fandom.com/wiki/Dexter_Slice_of_Life?oldid=101119"
Community content is available under CC-BY-SA unless otherwise noted.