Dexter Wiki
Register
Don't have an account?
Sign In
Advertisement
in: Has Disambiguation, Alive (Comics), Characters (Comics),
and 23 more

Dexter Morgan is the lead and title character of both the Dexter Novels and the Dexter Comics, all written by Jeff Lindsay.

Dexter is a charming forensic blood spatter analyst, who also happens to be a serial killer.

In the TV series, Dexter Morgan himself was far more "human." Over time, he began to discover the importance of friends and family, and experienced the feelings of love and grief.

Dexter is the adopted child of Harry Morgan and Doris Morgan, as well as the adopted brother of Deborah Morgan.

During his time at Coconut Grove High School, Dexter was bullied by a Cuban student known as Steve Gonzalez. After a pep talk with his father, Harry, Dexter attempted to make Steve pay for the abuse to the point of putting Steve on his table. However, Dexter was interrupted and was unable to kill Steve.

As a teenager, Dexter realized that he was uninterested in sex or dating and needed instruction by his father on how to interact with women.

As stated in Darkly Dreaming Dexter, after high school, Dexter completed his studies at the University of Miami.

When Dexter was 19, Harry fell ill of coronary disease and was confined to a hospital where Harry spotted First Nurse who was purposefully overdosing patients on morphine. Harry gave Dexter his permission to kill her. She was Dexter's first human victim.

Dexter is the title character of each of the books and, as such, is the main focus of each novel, mostly told from his perspective.

Near the end of the first book, Brian and Dexter meet in a shipping container similar to the one they were held in as children, and Brian recounts what happened. He says that one of the bodies they were surrounded by could have been their father for all they knew. Deborah is awake when Dexter arrives at the cargo container, and she learns of Dexter's hobby as a serial killer. After the death of Detective LaGuerta, Deborah begins to accept Dexter.

Dexter is forced to wear his "disguise" all the time because Sergeant Doakes is following him, trying to catch him in the act of killing someone. In desperation, Dexter tries to discover something about Doakes that might be useful in getting Doakes off his tail. However, he finds out very little. Dexter realizes that Doakes and Kyle Chutsky know each other after Doakes has Captain Matthews call in help from Washington when a still alive, dismembered body is found. Dexter learns from Deborah and Chutsky that Doakes served in a black-ops mission in El Salvador. He also learns about Dr. Danco, the man responsible for the mutilated body. When Chutsky himself is taken, Deborah pleads with Dexter to find him. Luckily for Dexter, his new friend - Luis Barba - understands his lizard brain, becoming Dexter's new side kick and student. Luis also helps with distracting Doakes. Not long after, Dr. Danco sends Chutsky's finger with the ring still attached. Dexter keeps the ring to give back to Deborah, but Rita finds it and believes that Dexter is meaning to propose to her. Dexter, Deborah, and Doakes work together to find members of the El Salvador unit. During a chase through Miami, Dr. Danco runs Dexter and Deborah off the road. Dexter and Doakes set up a trap to lure the doctor but it enables Dr. Danco to capture Doakes. Dexter traces Doakes' cell phone to an alligator farm where he finds Chutsky and helps him escape. However, Dr. Danco still has Doakes, and then Dexter himself is captured by Dr. Danco. It is only the timely arrival of Deborah and Chutsky that saves him.

It is revealed through third person narrative of an entity referred to as "IT" that the Dark Passenger is an independent agent inhabiting Dexter, rather than a deviant psychological construction. Later, Dexter realizes the Dark Passenger is related to Moloch, a Middle Eastern deity worshiped in Biblical times. The Dark Passenger is one of Moloch's many offspring; Moloch had many children (formed through human sacrifice), and learned to share its knowledge with them. Eventually, there were too many, and Moloch killed the majority; however, some of them escaped into the world. In the novel, Dexter learns of the Dark Passenger's true nature when it briefly "leaves" him, frightening him into researching possible reasons for its existence. Dexter comes to accept his role as stepfather to both children very seriously, albeit in his typical fashion. For example, while on a stakeout, he begins to wonder if Cody had brushed his teeth before bed and if Astor had set out her Easter dress for picture day at her school. These thoughts distract him from hunting an intended victim, which thoroughly annoys him.

Lindsay deviates from the supernatural subtext of the previous book, and focuses on psychological suspense. The book opens in Paris, with Dexter and Rita on their honeymoon. While visiting an art gallery, Dexter and Rita are introduced to the concept of body parts being used as art by an avant-garde performance piece called "Jennifer's Leg" in which the artist amputates her own limb. When they return to Miami, Dexter crosses paths with two new enemies; a suspicious homicide detective, and a new serial killer in town targeting tourists. Thought to be one of the killers displaying corpses in public, Dexter murders Alex Doncevic. He later finds out that Doncevic was not a killer. He and Brandon Weiss were just stealing corpses of already dead people from the morgue and displaying them with decorations. Doncevic's death causes Brandon to become an actual serial killer. Alex is the first somewhat innocent victim of Dexter.

Dexter finally decides to give up his dark hobby after witnessing the birth of his daughter Lily Anne. He believes that for the first time in his life he is feeling genuine emotion. Meanwhile, Dexter becomes reacquainted with his brother Brian, who knows about Dexter's child. Dexter struggles with the burden of feeling emotions while attempting to give up his serial killing life. At one point, Dexter indulges himself after getting angry, but he immediately vows not to do it again. At the end of the novel, Dexter sets out to kill Bobby Acosta, the son of a city commissioner who gets away with murder and cannibalism, after Deborah realizes that Bobby's father will simply pay for the entire thing to disappear.

Dexter is spotted while performing his Hobby. This person soon begins to torment Dexter while also beginning their own killing spree. Dexter finds himself in a game of Cat and Mouse, as Dexter tries to find out his tormentor's Identity.

When movie star, Robert Chase, and a group of actors descend on the Miami Metro Police Department for "research," Chase becomes fixated on Dexter Morgan, the blood spatter analyst. Chase shadows Dexter's every move, trying to learn what makes him tick. This makes it difficult for Dexter to continue his favorite pastime of hunting down killers who've escaped prosecution.

Dexter is arrested on charges of murder. He has lost everything -- including his wife, his kids, and the loyalty of his sister. Now completely alone, Dexter faces a murder charge (for a crime, ironically, he did not commit). His only chance for freedom lies with his brother, Brian, who has a dark plan to prove Dexter's innocence... but the stakes are deadly.

In a dark alley, Dexter sneaks up on and kills a mustached man. Later, Dexter and Rita attend Dexter's High School Reunion at Coconut Grove High School. At the reunion, Dexter runs into a figure from his past -- Steve Gonzalez.. Dexter was bullied by Steve in high school, and Dexter had attempted to kill him. When Dexter assists with a murder victim, Arthur Bleek, he finds that he is connected to the New Hope Foundation, an institution owned by Steve Gonzalez.

Steve and his bodyguard, Deveaux. arrive at the Bleek's crime scene. Dexter and Deborah soon learn more about New Hope Foundation and its connection to Steve's Mar Dorado resort. While on the road, a motorcyclist attempts to kill them by setting their car on fire.

Deveaux is found murdered. Deborah stops a robbery by slapping a man with a knife. After Dexter discovers that Steve is ripping off his patients, he taken by surprise by Steve and incapacitated.

Dexter is transported to Mar Dorado, a private island. He is forced to work as a slave alongside patients from the New Hope Foundation. Deborah is also captured. Both she and Dexter are taken inside a building where they are about to be killed. When an alarm goes off, Steve abruptly leaves and Octavio is ordered to finish the task. Dexter manages to free himself and kill Octavio. Dexter and Debra are then captured and held by the FBI (temporarily). Meanwhile, Steve flees to Venezuela on his yacht, but Dexter follows him there and manages to kill Steve.

Dexter's new book, called New Techniques in Pattern Analysis of Blood Spatter, is in bookstores. Captain Matthews tells Dexter that his assistance has been requested in Australia. Freshly arrived to the airport, Dexter is greeted by Sergeant Shawna Wiggs, who escorts Dexter to the Canberra Police HQ. They begin to investigate the murders of immigrant Asians.

Dexter has a hunch that Grigsby is the killer, and they search for evidence. During the night, Grigsby kills more Asian immigrants.

Shawna and Dexter break into a farm by cutting a hole in the fence. They find a group of immigrants who are being imprisoned in cages. After this discovery, they try to escape but are surprised by Bruce Grigsby who takes them both down.

Dexter and Shawna awake in an unknown location, with a robotic tank-like machine approaching them. Grisby forces Shawna and Dexter to start running.

Dexter isn't the hunter, but the prey. Grigsby corners Shawna and attacks her with a knife, Dexter appears, slices off his hand, and kills him. Shawna and Dexter then free the caged immigrants and burn Grigsby's body. For the next two weeks, Dexter and Shawna spend their time having sex. On his way back to Miami, Dexter reflects on his time in Australia. 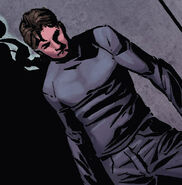 Dexter in his killing attire 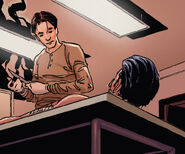 Dexter fears Steve's return is not a coincidence

Dexter grows a beard, on a remote location far from metropolitan cities...sounds familiar 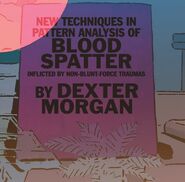 Shawna and Dexter break into the farm

Breaking in
Community content is available under CC-BY-SA unless otherwise noted.
Advertisement