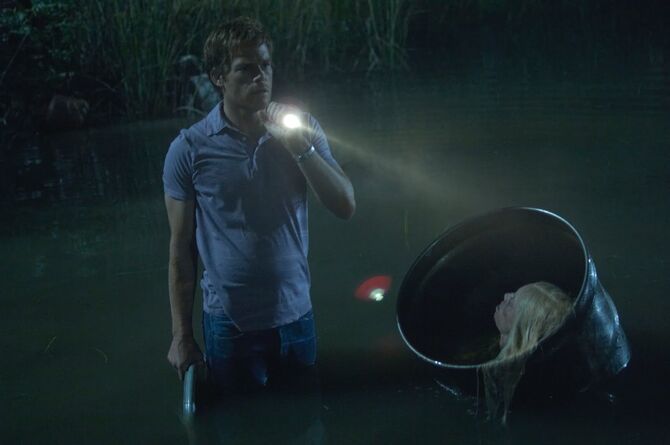 Dexter Morgan is the protagonist of both the DEXTER television series and the Dexter Novels.

The fifth season of Dexter premiered on September 26, 2010.

It focuses on Dexter coming to terms with the aftermath of his wife's murder, stopping a group of serial rapists, and diverting the suspicion of a homicide detective.

At the ending of Season Four, Dexter is shocked to find his wife, Rita, dead in the bathtub, murdered by Arthur Mitchell. Nearby, Harrison, is found sitting in a pool of blood, much like himself when his own mother was murdered.

Events pick up directly after the “The Getaway.”

Dexter is asked by the police what happened and he says, "It was me," which puzzles everyone. An officer tries to take Harrison, but Dexter hands him to Debra Morgan. The FBI is told to make an appointment to question Dexter. Detective Joey Quinn becomes suspicious of Dexter and starts to investigates him on his own, later enlisting the help of Stan Liddy.

Dexter decides he will be an unsuitable single parent. He destroys his victim files, abandons Harrison, and takes off on his boat. At a fuel dock store, Dexter encounters an obnoxious man and he beats him to death. Having released his pent-up anger, Dexter returns to attend Rita's funeral and resume his parental responsibilities.

In order to have free time to stalk killers, Dexter hires a nanny named Sonya for Harrison. Because his son witnessed his mother’s murder, Dexter talks to a counselor and she reassures him that his son will not suffer lasting effects.

After Dexter finds human blood in a rented truck, he hunts down the last driver, Boyd Fowler (an animal pickup officer). He follows Boyd and discovers him dumping barrels of dead girls in a marsh. He befriends Boyd, and even goes on a ride along with him. Dexter sets up a kill room in an abandoned tourist center, but things go awry. Due to an unexpected mishap in which they knock each out, Dexter ends up killing Boyd in his house. Dexter is unaware that a woman named Lumen Pierce is being held captive in the house and she saw Dexter murder Boyd. When Dexter notices Lumen, he captures and imprisons her at the visitor center.

Dexter tries to convince Lumen that he will not hurt her, but she doesn’t believe him and after a few days, she breaks free. Dexter chases her through woods, out onto a road. Due to Lumen’s reluctance to enter a car occupied by males, Dexter re-captures her. He then takes her to the marsh where Boyd disposed of his victims and shows her what he saved her from.

Slowly, Lumen begins to trust Dexter and tells him about the men who beat and raped her. He sets her free and she goes to stay at a motel. Bent on revenge, Lumen nearly kills an innocent man named Robert Brunner (after Dexter himself almost killed him).

To get Lumen out of town, Dexter buys her an airline ticket and takes her to the airport. However, Dexter doesn’t realize that Lumen is still in Miami, and continuing the hunt for her attackers.

Lumen soon shoots a man she that believes is one of her rapists. Confused about what to do next, she calls Dexter in a panic for his assistance. This annoys Dexter because he just captured his next victim - Lance Robinson. He throws Lance into his car’s trunk and rushes to a warehouse - only to find Lumen’s victim missing. The two search the area, bickering over why she did this. Lumen insists that she recognized him due to his distinct smell, which Dexter finds dubious.

Dexter tracks the man’s blood trail by using Luminal and finds him hiding under a grate. The man insists on his innocence, and they learn his name is Dan Mendell. While Dexter argues with Lumen, Dexter hears Dan secretly making a phone call that confirms he is one of Lumen’s rapists. He promptly snaps Dan’s neck.

It does not take long for Lumen’s rapists to arise. One of them, Cole Harmon, attempts to relocate the dead barrel girls, only to end up in an accident with a drunk driver. Cole flees the scene, leaving the bodies strewn on the street. Dexter is brought into the investigation and the truck is found licensed to inspirational speaker, Jordan Chase. Both Jordan and Cole arrive at Miami Metro Homicide to answer questions. Dexter snaps photos of them to show to Lumen, but she only recognizes Cole. They break into Cole's house, where they find an old photo of Boyd, Cole, Dan, and two unknown others. While there, Cole returns and Lumen is forced to knock him out.

Dexter sits in on one of Jordan's seminars, and it’s not long before Jordan notices him. Afterward, he asks Cole to bring Dexter up to his hotel room. Jordan greets Dexter in a friendly manner, and reveals his interest in the Trinity Case. Before he leaves, Jordan gives Dexter gifts for Harrison.

Dexter plans to kill Cole in the hotel and he books a room next to Cole's room. He and Lumen are unable to kill him that night, however, when a woman spends the night with Cole. The next day, Dexter puts his new plan into motion. He’ll grab Cole at an elevator when Cole departs for his rounds. Meanwhile, Dexter sits in at another seminar. As he is about to leave the room, Jordan calls Dexter up on the stage to discuss his feelings about his wife's death. Dexter stands in front of the audience, struggling to express how he felt when he found Rita murdered. Jordan watches him, smiling, with intense interest.

Cole spots Lumen listening to Dexter on a lobby screen. and chases her through the hotel to her room. She locks the door but he bursts through from his adjoining room and tackles her. Dexter takes the first opportunity to get off stage, and saves Lumen before the life is choked out of her. Threatening Cole with his knife, Dexter attempts to force the identities of the other rapists, but to no avail. Lumen watches Dexter thrust his blade into Cole, and he then presents her with Cole's blood slide. Dexter sends Lumen away, dismembers the body, and leaves the hotel with the remains in suitcases. As he loads his car, Dexter encounters Jordan, who imparts a familiar line, "Tick tick tick...that's the sound of your life running out."

Now with Jordan in his sights, Dexter begins meeting with him regularly for workouts, hoping to learn his connection to the rapes. He notices a blood vial that Jordan wears around his neck which he only removes while showering at the gym. This gives Dexter the opportunity to steal a drop of blood from the vial and test it. Mysteriously, it turns out to be the blood of a local woman, Emily Birch. When Lumen and Dexter investigate Emily, she reveals that she is the first rape victim of the Barrel Girl Gang. She identifies all the men in the old photo. The two unknown men are Alex Tilden and Jordan Chase.

Meanwhile, Dexter's stepdaughter, Astor Bennett, and her friend, Olivia, take a bus from Orlando to Miami and break into Rita and Dexter's House. It's obvious to Dexter that they have been drinking, and they soon get in trouble for shoplifting. Before long, Barry Kurt (boyfriend of Olivia's mother) arrives in Miami to retrieve Olivia. When Dexter learns that Barry is abusive to Olivia, he arranges a meeting with Barry in an alley. Dexter thoroughly beats up Barry - organ by organ - and orders him to leave Olivia’s mother. Dexter then drives Astor and Olivia back to Orlando. He tells Astor that he loves her and she once again accepts Dexter in the role of father. While there, he also visits with Cody.

Jordan, now knowing that Dexter and Lumen are taking out his men, makes a call to Lumen. This terrifies her, and she moves out of Dexter's house into his apartment. One evening, Dexter discovers a hidden camera in his place, and assumes it was planted by Joey Quinn (this is later proven wrong).

When they track down their next target, Alex Tilden, Dexter allows Lumen to perform her first kill. After this event, their partnership turns into an intimate relationship.

Stan Liddy, who was hired by Quinn, kidnaps Dexter and shows him incriminating footage to force a confession. His aim is to be reinstated to the police force. The confrontation ends in Liddy's death inside his van. Immediately after the kill, Joey Quinn appears outside the van, looking for Liddy. Not aware that Dexter and a deceased Liddy are inside the vehicle, Quinn leaves the area (with a drop of Liddy's blood on his shoe). Unfortunately, when police arrive on scene, Maria LaGuerta notices the blood on Quinn’s shoe and he is suddenly the prime suspect. Later, Dexter tampers with evidence to clear Quinn's name. When Quinn thanks him, Dexter feigns ignorance.

Jordan captures Lumen and, in a fit of rage, kills Emily in front of her. He locks Lumen in his trunk and takes her to the same camp where she was raped by the other men. In a phone call, Jordan lets Dexter know that Lumen is still alive. Dexter hurries home to grab his kill tools, only to be greeted by his family who just arrived from Orlando for Harrison's birthday. He forcefully insists that he has to leave due to work.

When Jordan is stopped a light, a fruit vendor hears banging inside the car trunk. He notifies the police, and Debra Morgan sets out to learn more from him. The vendor tells her that the car was headed toward a camp.

Despite knowing that he's being baited into a trap, Dexter readies himself to save Lumen. He finds the camp, only to be held at gunpoint by Jordan and thrown down stairs. While Jordan is admiring Dexter's knife set, Jordan notices that one of the knives is missing. Dexter promptly stabs him in his foot with it, anchoring him to the floor. Dexter straps Jordan to a table and Lumen performs the final kill after Jordan smugly confesses.

As they are cleaning up, Debra finds the camp and holds Lumen and Dexter at gunpoint through a plastic sheet (thus unable to see them). In the end, Debra allows them to escape with Jordan's body. They dispose of Jordan at sea, and Lumen seems thoroughly relieved. The next morning, however, Dexter learns that Lumen’s urge to kill has vanished and she must go her separate way.

As the season closes out, a birthday party is held on the beach for Harrison. While Dexter holds his son, he reflects on his wish to be human. As he blows out the single candle, his last thought is, "But wishes, of course, are for children."

During this season, Debra Morgan is heavily involved with the Santa Muerte Case. Dexter is only peripherally involved.

Dexter wearing hat given by Astor and Cody

Dexter is questioned by the FBI

Dexter kills Rankin with an anchor

Debra and Dexter pack up his house

Dexter and an abused Lumen

Dexter and Lumen at airport

Dexter and a wounded Dan Mendell

Lumen seeks to kill her rapists

Astor Bennett has a problem

Dexter and Jordan run on treadmills 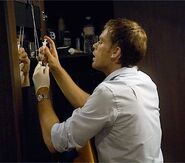 Dexter and his kill tools

Dexter tells Lumen there's a camera in the room

Dexter and Lumen strategize a kill

Dexter runs through his neighborhood

Jordan notices that a knife is missing

Harrison Morgan's birthday party
Add a photo to this gallery
Retrieved from "https://dexter.fandom.com/wiki/Dexter_Morgan/Season_5?oldid=112671"
Community content is available under CC-BY-SA unless otherwise noted.