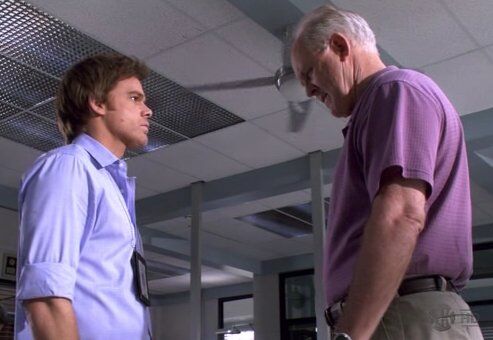 Dexter Morgan is the protagonist of both the Showtime television series DEXTER and the Dexter Novels. He is a serial killer and a blood spatter analyst for the Miami Metro Homicide Department.

The fourth season premiered on 27 September 2009. It focused on Dexter attempting to find a way to balance his family life, the birth of his son, and his secret activities.

Six months later, Dexter and Rita are now married and living in a different home with their new son, Harrison, and her children, Astor and Cody. Dexter attempts to adapt to married life in suburbia but finds it difficult to maintain his double life now that he is a husband and father. His lack of sleep results in a murderer being released, and his falling asleep at the wheel. Suffering from amnesia following his car crash, Dexter begins a search for a lost body.

When a local vandal stirs up trouble, Dexter's neighborhood becomes vigilant, something that Dexter doesn't need. His mobility is also hampered by Rita, who insists on driving him around after his accident.

A recently retired FBI Agent, Frank Lundy, returns to finally capture a serial killer known as The Trinity Killer who has been at large for thirty years. The Trinity Killer is believed to be an older male, who murders three people in a yearly cycle and in a specific sequence - a young woman killed in a bathtub, a mother killed by falling, and a father bludgeoned.

While Rita and the kids are out of town for a wedding, a police officer who killed her family is targeted by and killed by Dexter. Meanwhile,Joey Quinn's reporter girlfriend,Christine Hill, uses their relationship to write stories about the Vacation Murders - a series of crimes.

Rita discovers that Dexter has secretly kept his apartment. Fed up with his lies, she forces him into marriage counseling. Also, after rekindling their relationship, both Lundy and Debra are shot by an unknown assailant; Debra survives but Lundy's wounds are fatal. While she recovers, Debra stays with Dexter and Rita.

While Dexter tries to figure out how he can survive in the years to come, he targets Trinity. Dexter discovers that Trinity's real identity is Arthur Mitchell, a family man and church deacon. Intrigued by his ability to blend into society, Dexter puts off his decision to kill him. They meet at the church where Arthur preaches, with Dexter under an alias as "Kyle Butler." Dexter slowly gains Arthur's trust while hoping to learn some of his secrets for maintaining his dual-life.

Dexter feels rare remorse when he kills Jonathan Farrow, a photographer. He believed that Farrow was killing his models but afterward learns that his assistant is the true killer.

As time passes, Dexter learns that Trinity's "normal" home life is not as perfect as it appears on the outside, with his wife and children emotionally and physically abused into obedience. Dexter ignores several chances to kill Arthur, while he prods him for information. Dexter even stops Arthur from committing suicide while they are on a road trip. Dexter theorizes that Trinity's killing cycle represents the deaths of Arthur's sister, mother, and father, and that Arthur is using the Four Walls One Heart program to cover his tracks.

It is later comes to light that Christine Hill is Arthur's daughter from a previous relationship. After Arthur rejects her, Christine kills herself after confessing to Debra that she was the one who killed Lundy.

In a heated moment on Thanksgiving Day, Dexter attacks Arthur and reveals his intent to kill him. This causes Arthur to search for Kyle Butler, Dexter's alias.

After Dexter observes Arthur abducting a young boy from an arcade, he realizes there is a missed part of Arthur's pattern. Before he kills a woman in the bathtub, Arthur kills a ten-year-old boy. The boy represents a young Arthur Mitchell. in Dexter's attempt to rescue the boy, he blackmails Arthur (under his alias as Kyle) with the threat of exposing him as a pedophile. Dexter is able to rescue the boy, but Arthur escapes for the moment.

While chasing after Arthur, Dexter is involved in a hit-and-run. Although he catches up to Arthur and tranquilizes him, Dexter is arrested and placed in jail after he loses his temper while being questioned by police about the accident. During Dexter's short time in jail, Arthur again escapes.

After this, Arthur follows Dexter to Miami-Metro and learns his true identity. He greets Dexter with, "Hello, Dexter Morgan." Arthur tells Dexter to leave him alone and he will leave him alone. However, Dexter is even more determined to kill him.

Arthur attempts to flee Miami but, after sabotaging Arthur's car, Dexter captures him and puts him on his table. Arthur testifies that he accepts his fate as part of God's plan and that he never wanted to murder, but was unable to control the demon inside of him.

After he kills Arthur, Dexter goes home expecting to depart for his honeymoon with Rita. However, upon arriving home, he finds a message from her on his phone. The message reveals that she forgot her passport at home, and had to return for it. After hearing the message, he calls her back, only to hear her phone ringing nearby.

From the bathroom, Harrison is heard crying, and Dexter rushes to help his son. When he enters the bathroom, he sees a familiar scene - a child sitting in the blood of its mother. Rita is dead in the bathtub - the last victim of Trinity. Dexter picks up his son, thinking, "It doesn't matter what I do... what I choose... I'm what's wrong." He then carries a blood-soaked Harrison out of the house with a distraught expression on his face.

Rita calls Dexter during a kill

Dexter falls asleep at wheel and rolls his car

Dexter and Rita at neighborhood barbeque

Dexter is threatened by Zoey

Rita and kids return from a trip

Dexter and Frank Lundy on site of supposed suicide

Dexter on his boat with Debra, Cody, and Astor

Dexter extracts an arm from an alligator

Dexter follows Trinity to his home

Dexter introduces himself under an alias to Arthur

Dexter with Arthur and [[Sally Mitchell

Dexter is tempted to kill Arthur

Dexter and Cody on a camping trip

Dexter tells Arthur that he killed a man

Arthur pulls out his dented fender

Dexter stalks Trinity in an arcade

Dexter hides in a coffin made by Arthur

Trinity unaware that Dexter is following him