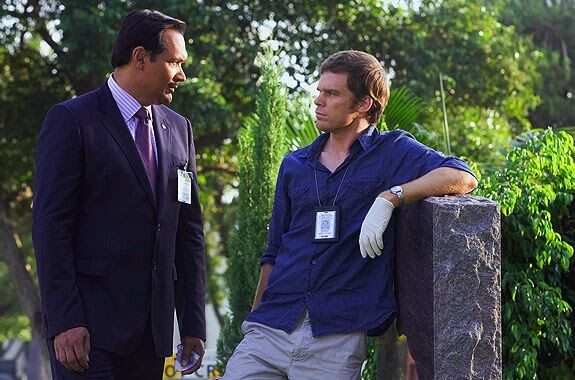 Single; married in Do You Take Dexter Morgan?

Dexter Morgan is the titular character in both the Showtime series DEXTER and the Dexter Novels. He's a serial killer who works as a blood spatter analyst for the Miami Metro Police Department.

Dexter kills a man in self-defense which leads to a risky friendship with the man's brother, ADA Miguel Prado. In the meantime, Rita discovers that she is pregnant, and Debra investigates the murders of a new serial killer, called "The Skinner."

Dexter continues his double life as a serial killer and blood spatter analyst. His sister, Debra, aims to earn her detective shield, and starts working with a new partner, Joey Quinn.

Rita discovers that she is pregnant and informs Dexter that she will keep the baby and raise him - with or without his help. Dexter wonders whether he is fit to raise a child and commit to a family. Later, Dexter ends up proposing marriage to Rita, which she accepts.

While stalking a murderous drug dealer, "Freebo", Dexter stumbles upon a fight between Freebo and another man, whom he kills in self-defense. This victim turns out to be Oscar Prado, brother of Miguel Prado, a prominent Senior Assistant District Attorney and an old flame of Maria LaGuerta.

Eventually, Dexter tracks down Freebo and kills him, but he encounters Miguel at the scene. Dexter convinces Miguel that he killed Freebo in self-defense. Miguel is grateful to Dexter for killing Freebo and agrees to help conceal his death. Dexter begins to view Miguel as a friend and, later, asks him to be the best man at his wedding.

When a pedophile targets Astor, Dexter violates his code and kills him.

Miami Metro Homicide begins to track a new serial killer named the The Skinner because he partially skins his victims alive. Debra begins to sleep with a confidential informant, Anton Briggs.

Suspecting that Dexter may be a killer, Miguel mentions a murderer, Ethan Turner, to test if Dexter will go after him. After Turner goes missing, Miguel praises Dexter for killing another criminal and offers his aid in the future. When Dexter can't discourage Miguel, they engage in a risky operation to free an Aryan Brotherhood leader from prison in order to kill him. The plan succeeds, but Dexter performs the kill on his own.

Miguel and Dexter's partnership takes a new step when Miguel offers to be the one to kill their next target. With some reluctance, Dexter agrees. He only watches as Miguel kills without hesitation. The next day, Ellen Wolf, a defense attorney and courtroom adversary of Miguel's, goes missing and Dexter discovers that Miguel has killed her alone, against his wishes. Dexter also learns that Miguel has been manipulating him since the beginning, which infuriates him.

As Dexter and Miguel race to have leverage over one another, Dexter realizes that Miguel cannot be allowed to run loose any longer. After an intense confrontation, Dexter decides to kill him. When Miguel attempts to kill Maria, Dexter captures and strangles him. Before he kills Miguel, Dexter confesses that he was the one who murdered Oscar.He then successfully frames The Skinner for Miguel's murder. Before he died, however, Miguel was able to enlist the help of The Skinner to target Dexter.

Miguel's other brother, Ramon, becomes increasingly suspicious of Dexter. After pointing a gun at Dexter during a dinner with Rita, Ramon is taken into custody. During a visit to him in jail, Dexter helps Ramon put his demons to rest without revealing what he or Miguel really did together.

On the night before his wedding, Dexter is captured by The Skinner. However, he is able to break free by fracturing his hand. After a short vicious fight, Dexter snaps The Skinner's neck and stages a suicide by throwing his body beneath a moving police car. Dexter then has a cast applied to his broken hand before he marries Rita. While they are dancing at the reception, blood from Dexter's cast drips onto Rita's wedding dress.

Dexter pretends to be a drug addict

Miguel listens to Dexter describe how Oscar Prado was killed

During his MRI, Dexter ponders the brain scans of serial killers

Dexter swims in his pool

Dexter weighs including Miguel in his kills

Miguel listens to a potential witness

Miguel and Dexter with an intoxicated Ramon Prado

Dexter at his bachelor party on the Bachelor Party Boat

Miguel falsely appears to be a Skinner victim