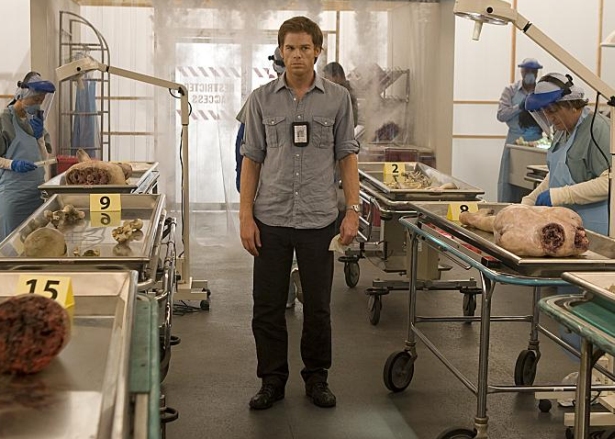 Dexter Morgan is the protagonist of both the Showtime DEXTER television series and the Dexter Novels.

In this season, eighteen bodies of Dexter's victims are uncovered and an investigation is launched in Dexter's own department to find the killer, dubbed the "Bay Harbor Butcher."

Following the events of Season One, Dexter has been living in a grieving process with the murder of his brother Brian Moser (in order to protect his sister Debra Morgan) and it has effected both his urge to kill, sexual performance, and his concentration. Meanwhile, Dexter spends his spare time engaging in more normal activities, such as going bowling with Masuka and Batista.

At the start of Season Two, thirty-eight days have passed since Dexter killed his brother. He has not been able to kill anyone since then because Sgt. Doakes has been stalking him as he believes that Dexter is somehow connected to the Ice Truck Killer. Also, Debra, traumatized by her ordeal with the Ice Truck Killer, moves in with Dexter, much to his annoyance as it hinders his freedom to kill.

Unexpectedly, the bodies of eighteen of Dexter's victims are found when a local scuba diving team discovers his underwater grotto of corpses in Bay Harbor. This begins what is known as the Bay Harbor Butcher Case. Soon every person in the department is searching for the elusive "Bay Harbor Butcher." An FBI Task Force arrives to help with the investigation and Dexter takes steps to divert suspicion away from himself. Special Agent Frank Lundy becomes involved with Debra Morgan.

When Dexter finally eludes Doakes, he attempts to kill a blind voodoo priest named Jimmy Sensio but finds that he is unable to do so and he lets him go. The next morning, Dexter arrives at a crime scene still frustrated about the previous night. There he sees that a young gang member has been killed. His mother, who is present at the crime scene, runs to her dead son and says a few words in Spanish to Dexter. Batista interprets and says that her son was killed by someone named Little Chino and that she wants Dexter to kill him like a dog.

To overcome his performance issues, Dexter targets Little Chino as a challenge - "a mountain to climb." Dexter manages to convince Doakes that he will be bowling until late at night and Doakes departs. in reality, Dexter plans to kill Little Chino. Dexter stalks Chino to a tattoo parlo, kidnaps him, and takes him to Jimmy's shop. Dexter ties him to the same table where he had tied Jimmy and takes a blood sample, but Chino suddenly awake and breaks the plastic wrap (due to his strength). Although Little Chino escapes this time, Dexter later recaptures and kills him.

His relationship with Rita starts to become shaky. To conceal that he is a serial killer, Dexter tells Rita that he has an "addiction." She assumes that it is heroin and forces him to attend a Narcotics Anonymous program which he then uses as part of his cover life. When he starts having sex with his sponsor, Lila West, his relationship with Rita temporarily ends. Lila thinks that Dexter is emotionally shut down and attempts to help him "get in touch with his feelings." However, she soon becomes obsessed with him and jealous of Rita. Eventually, Dexter ends up killing her because she is a murderer and an arsonist.

When Sgt. Doakes discovers that Dexter is The Bay Harbor Butcher, Dexter captures him and keeps him locked in a cage for nearly a week. Unfortunately for Doakes, he doesn't make it out alive.

By the end of the season, Dexter is in a good place. He said a final goodbye to his brother, rekindled his relationship with Rita, framed the deceased Doakes for his own crimes, and escaped the justice system. Dexter begins to think that the people in his life aren't just disguises and that he needs them. He also decides to follow his own new path and explore new rituals. 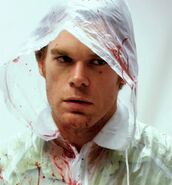 Dexter agrees to go to Naples with Lila

Dexter stares at Santos Jimenez in his Naples bar

Dexter tells Rita that he had sex wih Lila

Dexter dismembers Jimenez in the cabin

Poster of The The Dark Defender (superhero)

Dexter feels an affinity with superheroes

Dexter has a dream that he's The Dark Defender

Frank Lundy tells Dexter that the BHB is compulsive

Lila tells Dexter they're meant to be together

Dexter on his boat, Slice of Life

FBI and Rita at Dexter's door

Doakes tells Dexter to stay away after he kills Jose Garza

James Doakes in a cage inside the Cabin in the Everglades 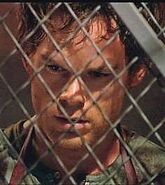 Dexter talks to a caged Doakes

Dexter speeds to the cabin

Dexter saves Cody and Astor from a fire

Lila West is unaware that Dexter plans to kill her