Dexter Wiki
Register
Don't have an account?
Sign In
Advertisement
in: Has Disambiguation, Early Cuts, Dexter Morgan,
and 4 more 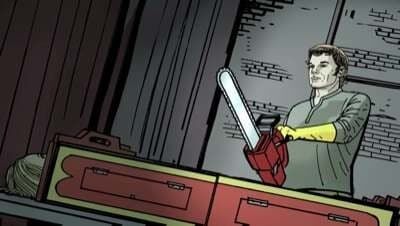 Dexter sedates his victims with M99 or chokehold, wraps them in plastic, ties them down, and stabs them in the heart (specifically the left ventricle). He has altered his method for certain victims

Bodies are usually subjected to post-mortem dismemberment. The severed pieces are put in biodegradable trash bags and dumped into the Atlantic Ocean (specifically, the Bay Harbor. Later, he dumps them into the Gulf Stream.

Dexter (along with his brother Brian) witnessed the brutal murder of their mother in a cargo container at a very early age. After seeing Laura Moser chainsawed to pieces, they were left in the cargo container for two days, sitting in blood.

Dexter Morgan is a serial killer and the protagonist of Dexter Early Cuts, an animated web series. The Early Cuts stories precede the narrative of the television show.

In Dexter Early Cuts, the story does not continue from one season to another. Each season of Early Cuts takes place in a specific time period, and all stories have the objective of telling Dexter's early experiences as a serial killer.

The first chapters revolve around Dexter hunting down the three victims (Alex Timmons, Cindy Landon, Gene Marshall) that appear in Season One: "Return to Sender." Each victim has a separate story.

In Dark Echo, Dexter is challenged by a copy-cat killer who does not follow any sort of code. Dark Echo opens immediately after the death of Dexter's father, Harry, with Dexter age twenty and his sister, Debra, still in high school. Dexter is enrolled in medical school where he's studying anatomy to improve his "craft."

In All in the Family, Dexter works as a blood spatter analyst. To satisfy his dark urges, he hunts a new killer on New Year's Eve, and faces off with Coleman Lindquist and his father - a killing team.