They were written by the Dexter Novels author Jeff Lindsay, published by MARVEL. The series takes place within the novels' universe, rather than the Showtime series DEXTER.

The first issue was expected to release on October 3rd, 2012 shortly after the premiere of Season Seven of the television series.[1] However, it was pushed back to 2013 for unspecified reasons by the publisher. [2] They were finally released on June 2013.

All issues had a standard price of $3.99, however the price may have varied depending which method of purchasing was used by the customer (print, digital, or from an online third party).

It takes place within the universe of the Dexter Novels. It follows the exploits of Dexter Morgan prior to and during Darkly Dreaming Dexter and in the subsequent books.

A murder comes to the attention of Dexter Morgan and it is linked to a philanthropist group in Miami. Is that just a coincidence or are there extended roots? On top of that, there are some unsettled accounts between the head of the group and Dexter in the past.

Promo: "Dexter Morgan is not just an above-average forensic blood spatter expert. He’s also Miami’s friendly neighborhood crime-fighting serial killer! But Dexter’s “killing” streak gets put on hold, as he find himself trapped in a sticky situation – his high school reunion! The Skid Row Slasher, Miami’s newest serial killer, is racking up quite the body count. The rookie is giving good ol’ Dexter a run for his money. And Dexter’s problems are only beginning to multiply as his Dark Passenger, Dexter’s inner voice, screams for a little murderous fun to feed the need!"

Issue 1 is one of 5, suggesting that the storyline above is a self-contained arc within a miniseries, rather than a branching serial.

Dexter returns in a blood-soaked Australian adventure. When Dexter travels Down Under on the trail of a new murderer, he quickly learns that sharks aren't Australia's only deadly predator. Who is setting up illegal hunting safaris in the Outback, and are they targeting more than big game? Dexter investigates as only he can, but soon discovers that he isn't the hunter - he's the prey! Dexter becomes trapped in a private preserve where humans are in the crosshairs.

The following characters did not appear in the comics:

Dexter comics received mixed to negative reviews. While Dalibor Talajic received praise for his artwork, a major complaint was that the comics failed to adapt the main character in the way the TV series had done. Some also felt that the source content could not be effectively conveyed in a Marvel comic due to removal of some mature elements. 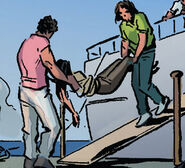 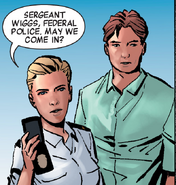