Dexter the Game is a video game developed by Icarus Studios and published by Marc Ecko Entertainment. .

Dexter the Game was based on the events of Season One of the Showtime series DEXTER. It was released in October 2010 for the Apple IPad, iPhone, and iTouch, and has since been released for PC

Dexter the Game 2 was released in September 2012.

The cast and crew of Dexter were supportive, with some of the cast providing full voice work for Dexter the Game, including Michael C. Hall reprising his role of Dexter Morgan. 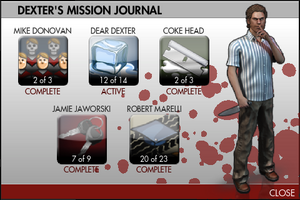 The game begins with a narration by Dexter who introduces himself and says that he is going to kill that night. His target is Mike Donovan, an upstanding teacher and choir director. Dexter discovers that he has been burying his dirty secrets when he follows Donovan to the outskirts of Miami. After Donovan leaves, Dexter investigates the area and confirms his suspicions that Donovan has been killing his own choir boys and burying their bodies. Dexter prepares his Kill Room in a nearby building; all it needs is Donovan.

Dexter sneaks to the choir stage and snatches Donovan's car keys, Donovan enters his Volvo after a choir performance, where Dexter is waiting in the backseat. After Donovan starts the engine, Dexter chokes him with a garrote wire and orders him to drive to the abandoned building from earlier. Dexter wakes up the sedated Donovan and takes a blood slide through a scalpel cut. He makes Donovan confess to his crimes and kills him. Dexter dumps Donovan's remains into the sea and adds his blood slide to his collection.

After dumping Donovan's body out to sea, Dexter returns to his apartment and listens to a message from Debra who asks him to hurry to the Lucky Ocean Motel. Dexter arrives at the scene, having conversations with Debra, LaGuerta, Batista, and Masuka. He then examines a decapitated body with not a single drop of blood anywhere and heads off to the station. After a brief confrontation with Doakes at the station, Dexter takes donuts to Camilla so that he can get his hands on the latest case files.

Dexter visits Rita and takes her out on a date to a crab restaurant, but their good time is interrupted when he spots a crime scene nearby. The victim was killed in a similar manner as the victim found at the Motel. Dexter then takes Rita home.

Dexter and Debra discuss the killer, speculating that he might be using a refrigerated truck to transport his victims, due to the ice-cold bodies having cell crystallization. Debra later tells Dexter of her failure in convincing LaGuerta of the refrigerated truck idea during the briefing, Dexter cheers her up by giving her confidence and advises her to search for the truck.

Doakes believes that the "Coke Head" Case was about a fight over drugs, but after Dexter analyzes the blood spatter found at the crime scene, he disagrees. Dexter explains that the cuts on the girl were passionate, but the guy was an afterthought. He presents his findings to LaGuerta and she decides to follow Dexter's lead in the investigation. Doakes confronts Dexter and threatens to ruin him if he is wrong. Dexter simply replies that he isn't wrong because the blood isn't wrong.

Dexter suspects Jamie Jaworski to be involved in the murder of Jane Saunders and several other women. He spies on him at the Hotel where he works and notices his tattoo. Dexter follows Jaworski to an abandoned construction site which further reveals that Jaworski is a thief who has been stealing copper piping and wire to resell for scrap.

Dexter takes a look in Jaworski's car and is nearly caught by him. Dexter also breaks into Jaworski's house to search for evidence. He finds Jaworski's rape website.

Dexter returns to his apartment and visits the website, discovering that Jaworski has been uploading snuff videos of him raping his victims. With enough evidence to prove Jaworski's crime, Dexter is given a choice to either to proceed in killing him or call the anonymous tip line to turn over the website to the police so they can arrest Jaworski.

Dexter offers to "help" Doakes on the Marelli case, but Doakes refuses to hand over the file to him. Dexter uses Masuka to distract Doakes and manages to get the case notes.

The game has received positive reviews, including an 8.0/10 from IGN. There were plans to release the game on the Xbox 360 and PlayStation 3 but there has been no recent information regarding expansion of the game onto these platforms.

Retrieved from "https://dexter.fandom.com/wiki/Dexter:_The_Game?oldid=108696"
Community content is available under CC-BY-SA unless otherwise noted.