Warren Hsu Leonard
The Family Business is the ninth of ten episodes in Dexter: New Blood. It first aired 2 January 2022 on Showtime.

Dexter and Harrison find themselves closer than ever over Christmas break. What kind of gifts will this father and son give to one another? But this brings this father and son into the crosshairs of a very violent and scary serial killer. Angela starts to wonder if Iron Lake is not the cozy and safe place she always thought it was.

In a flashback, Dexter goes to Mr. Wiggles' Playland to observe a local clown playing with children. He returns later that night after the Playland is closed to search with a flashlight.

Dexter opens up to Harrison about his urge to hurt people. Harrison relates to his urges and asks him why they’re like this. Dexter explains that because they both saw their mothers murdered when they were young they have these urges. Harrison says he’s felt alone for years. Dexter tells Harrison that his father gave him “the code” too dealing with these urges. First, one needs to find proof of the target’s past crimes. Once the evidence is found, he has justification to “do what the law failed to do”.

In another flashback, Dexter searches around the Playland and removes a mirror to find a hidden box of photos of dead little boys dressed up as clowns. Dexter ended up kidnapping the clown by injecting him with something and using the slide at Playland as a kill table. He shows Wiggles photos of his past victims before killing him.

In present, imaginary Deb warns Dexter not to tell the whole truth. Dexter doesn’t tell Harrison he killed his victims but he just scared them. Harrison compares Dexter to Batman. They wish each other Merry Christmas and say goodnight. Dexter sneaks out and goes back to Elric’s body to dismember him to hide it better.

At home, Angela looks at old victims of the Bay Harbor Butcher and sees a similar injection site to the ones that Miles and Jasper have. Angela and Audrey wish each other Merry Christmas.

Dexter gives Harrison a few presents on Christmas morning - including a rifle. Dexter tells Harrison that guns are loud and messy and that he does not use them to scare people. The gun is to help Harrison blend in. He teaches him how to shoot. They practice on bottles in the backyard and Harrison is a quick learner. Harrison asks more questions about Kurt and his reasons for going after them. Dexter explains that Kurt is a serial killer but that he doesn’t have proof yet to bring to Angela. Dexter does tell Harrison he has a plan to handle Kurt. Harrison gives Dexter a drawing of Deb as a Christmas present and Dexter is touched. Dexter surprises Harrison with one last present to blend in - a Christmas sweater.

Dexter and Harrison go by Angela and Audrey’s house to exchange presents. Audrey makes monkey bread for Harrison. She tells Harrison he seems happy and he tells her he found a way to let go of his anger. They all open presents together. The doorbell rings and Kurt is at the door with a gift. Kurt sees Dexter and Harrison and they exchange a few words before Kurt leaves. Dexter and Harrison abruptly leave and tell Angela he’ll be back later that night. Audrey finds their quick departure weird.

Angela shows up at Selena’s house with a gift and asks her about her ketamine supply. She confirms that "Jim" bought ketamine for his goat recently.

Harrison admits what he did to Ethan, and that he set the whole thing up. He asks Dexter how he knew. Blood splatter analysis Dexter responds. Harrison tells him that just scaring Mr. WIggles doesn’t feel like justice. He admits he fantasized about killing the Trinity Killer with his own razor. They plot to find proof about Kurt’s victims.

Dexter asks Angela if it’s okay if they don’t come over that night because they’ve been bonding. Angela tells him it’s no problem. She listens to Molly Park’s podcast about the Bay Harbor Butcher. As her suspicions grow, she calls Molly but just gets her voicemail.

Kurt loads his gun with ammunition. He puts on his ski mask and uses a power hose with gasoline to spray Jim’s house. He then lights the house on fire and waits outside with his gun.

Meanwhile, Dexter and Harrison are not at home at all - instead they’re at Kurt’s. They unlock an underground padlocked unit and Dexter crawls inside. He triggers an alert, intentionally, letting Kurt know he has found his hiding spot. Kurt looks at his phone and sees Harrison's face on the camera. Dexter and Harrison find a surgical table with tools. They find thirty of his victims, perfectly preserved as trophies.

Dexter admits to Harrison that he did kill Wiggles, as well as the Trinity Killer as revenge for what he did to Rita. Harrison says that Kurt needs to die too.

Angela goes to a hotel and asks about Molly Park abruptly checking out. They go into Molly’s room and find camera and equipment in a locked safe - something Molly would never leave behind, according to Angela.

Kurt grabs money, weapons, and essentials to try and run away. Harrison and Dexter break in and inject Kurt. They bring Kurt’s body back to his underground unit next to his victims. They prepare to kill Kurt. Dexter admits he’s done this "in the hundreds" of times. Harrison seems proud, and says Dexter has saved thousands of lives.

Kurt wakes up and finds himself strapped in plastic to a surgical table. Kurt admits his murders - claiming he saved the women because they’re just runaways. Kurt tells Harrison that Dexter killed Matt and that’s why he tried to kill Harrison. Dexter stabs Kurt in the chest while Harrison watches. Dexter dismembers Kurt’s body while Harrison continues to watch.

Harrison sees the blood, has a flashback of his mother's murder, and decides to go get some air. They bring the body parts to the local incinerator. Dexter tells Harrison it will look like Kurt ran because he packed his bags and emptied his safe.

Dexter and Harrison go home to see their house completely burned down. The fire department is already there. Audrey and Angela are there, wondering what happened. Audrey begs Angela to let them stay with them. They all go back to Angela’s house.

Angela finds an anonymous letter in her mailbox that says “Jim Lindsay killed Matt Caldwell” along with a second metal nail.

Harrison learns about the Code and Dark Passenger

Dexter returns to camp to dispose of Elric's body

Dexter argues with "Deb" about Harrison

Angela notices a mark on a BHB victim's neck

Harrison receives a rifle "to blend in" 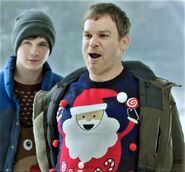 Harrison admits that he set up Ethan Williams

Dexter and Harrison with Kurt

Audrey and Logan at arson scene

Angela with note and screws