Dexter fights for his life in the woods, leading to a confrontation in an abandoned summer camp. Harrison finds himself torn between two father figures who can lead him down two very different paths. Angela starts to make some disturbing discoveries.

Elric drives with Dexter in the trunk, passed out. Dexter dreams about Harrison beating and killing some wrestlers at his school, while smiling and laughing. In the dream, Dexter is upset and closes his eyes. Dexter wakes up and realizes his hands are tied together.

Kurt calls Elric and he confirms he got the job he wanted done. He hangs up and Dexter chokes him and their car crashes into a pole. Dexter manages to untie himself but Elric gets out of the car with a gun. He shoots Dexter in the leg but Dexter keeps running.

Harrison sees Audrey buying a Christmas tree with Zach. He picks up a call from Kurt who asks if he’s at the truck stop. Harrison explains he had a fight with his dad and Kurt comforts him, offering to pick him up because he has a surprise for him.

Logan goes into Angela’s office and talks to her about Dexter. He mentions that Dexter beat up the drug dealer who gave the drugs that made Harrison almost overdose. She is surprised no one told her about it.

Dexter drags his bloody leg through the forest and Deb tells Dexter to save Harrison. Elric screams to Dexter “Kurt said I had to bring you in alive” but that he will just have to understand. He shoots again.

Angela tracks down Miles, who is still dealing drugs at the Crystal Bar. She asks him what went down with Jim Lindsay. He explains how Jim asked about getting drugs to get him outside and then just attacked. Miles said he put a needle in his neck and then started punching him after the cops pulled up. Miles shows her the injection mark on his neck.

Kurt lets Harrison into the school because he has an old set of keys. They look at old trophies of Matt’s and play baseball with a ball machine. Harrison gets hit by the ball twice but tells Kurt to turn the machine back on. He gets hit again over and over but seems to fell that he deserves it. Kurt offers to get Harrison some venison because he’s never tried it.

Dexter backtracks in the snow next to a creek, hoping Elric will think he crossed the stream. Elric follows the tracks and screams out “oldest trick in the goddamn book”, not falling for Dexter’s trick. Dexter runs towards a summer camp, leaving an intentional trail of blood behind, and Elric follows. Dexter finds a knife at the camp.

Kurt drives Harrison to his cabin, where he claims to keep his venison.

Angela tells Logan to close out Iris’s files and asks to be brought up to speed on the opioid case. She starts to get suspicions about what happened with Miles and Jasper.

Elric searches around the camp, realizing that Dexter grabbed a knife to fight with. Dexter jumps out and holds a knife against Elric’s throat. Elric gives up that Harrison is at Kurt’s cabin and that Elric was just doing his job - “nothing personal”. Dexter stabs and kills him. He takes his hat and jacket and covers his body with a tarp. Dexter uses Elric’s face to unlock his phone and respond to Kurt’s text asking where he is.

Angela observes Jasper’s body, asking the coroner if there is any other reason he could’ve died besides an overdose. She notices an injection mark on his neck and takes a picture.

At his cabin, Kurt shares some whiskey with Harrison. Kurt gives advice to Harrison to stop punishing himself for what he thinks is wrong with him. He tells him to do what he wants to do, no apologies.

Dexter urgently texts Harrison to not trust Kurt and to get away from him. Harrison reads it and asks to get some firewood outside. Kurt asks him if he wants him to go home and Harrison says no way, he wants the venison. Harrison turns his phone on airplane mode and ignores Dexter.

Kurt and Harrison laugh and bond over their venison meal. Harrison admits he and Audrey might not be a thing after all because of the wrestling match. Harrison asks Kurt about what happened with his arrest. Kurt lies that his dad murdered Iris and there was a DNA mix up. Harrison opens up about his relationship with Jim (Dexter) and how they don’t get each other on a father-son level. Kurt tells Harrison that if he were his son, he never would’ve walked out. Kurt gets up from the table to “take care of something” and Harrison looks at his phone seeing several missed calls.

Kurt walks into the room with a white ski mask on and a gun and tells him to get up and get out, apologizing for “sins of the father”. Harrison begs to make it right and asks him not to hurt him. Kurt just says “run”. The truck rides up and Kurt tells Elric to rush over so that Dexter can see this. He realizes it’s Jim (Dexter) driving the truck and says “Oh shit”. He tries to shoot Dexter but he drives over Kurt. Dexter and Harrison run towards each other and hug. Kurt runs away and Dexter and Harrison drive away.

Angela sits at home, looking at photos of Miles and Jasper. She searches on the internet for information about homicides in Miami and sees an article about the Bay Harbor Butcher.

Harrison asks Dexter what’s going on and Dexter tells him there is so much he needs to know. That he never needs to feel alone with his dark thoughts again. He tells Harrison that he was born in blood, just like him. That he had the same violent urges like him. His dad taught him a way to channel the urges and he’s going to tell Harrison the same. Harrison hugs Dexter.

Dexter passed out in back seat

Dexter dreams of Harrison in a fight

Blood on face from Bill (dream)

Kurt teaches Harrison how to bat 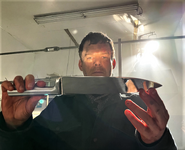 Elric looks at his injury

Kurt tells a story about himself

Kurt shows his true self

Harrison begs for his life