Warren Hsu Leonard
Sins of the Father is the tenth of ten episodes of the Showtime special event series Dexter: New Blood. It first aired 9 January 2022.

Dexter and Harrison try to live a normal life in a place that they have discovered is not as normal as they thought it was. Will the two of them be able to live happily ever after, despite all the threats coming their way?

Angela listens to Molly’s pre-recorded, unreleased podcast, while driving her police car to the scene of Jim’s burned cabin. She calls in a missing person - Molly Park.

People from the town help Jim (Dexter) sift through his burned belongings. He appreciates the help from the "good folks", while silently referring to himself as "Mr. Serial Killer." Angela tells Dexter there is evidence that it was arson, which makes his cabin a crime scene. Dexter acts surprised, though he knows Kurt is behind it. He insists that he didn't cross anyone, while flashing back to when he killed Matt, Harrison suggests that it was the Moose Creek wrestlers who tried to jump him at the truck stop a few days ago. Teddy Reed finds Dexter's watch (formerly Harry's) and returns it to him. A few Iron Lake High School wrestlers, Tess, and Sergeant Logan come by with donated clothes and a new wrestling jacket for Harrison. Dexter notes that Harrison is happy, and embraced by friends.

Angela looks through the burned rubble and finds something (bone screw) that makes her drop her jaw. She drives home and sees Dexter through the window with Audrey and Harrison. Angela goes inside and sees Dexter helping make pasta. She asks Harrison and Audrey to go to the store to get a few more things. Dexter asks Angela if she’s okay since she seems off and cold. She suddenly pulls out her gun and orders him to get on his knees and turn around. At first, he thinks she's role playing again, but then realizes she is serious. He kneels down and begins to reach for a kitchen knife. He quickly pulls back his hand when Logan enters the room with his gun pulled as well. They arrest Dexter for the murder of Matt Caldwell. Angela is angered when Dexter asks, "Matt Caldwell is dead?"

At the police station, they take his fingerprints and photos as Dexter Morgan. Harrison enters the station and asks what’s going on but they only tell him to take a seat. Angela video interviews Dexter about the day Matt went missing. She shows him the evidence that she has, including the thermal camera footage, the note from Kurt, and the screws from Matt’s body. She tells Dexter her theory about what happened that day. Dexter responds with his own theory - that Kurt framed him and Kurt really murdered Matt. Dexter reminds her that Kurt lied about being in New York and then suspiciously stripped his cabin. When Dexter mentions Iris, Angela loses her temper.

Angela and Logan talk privately and he tells her that Dexter's story is plausible. She tells Logan that he doesn't know the full story but she can’t tell him until she’s sure. She orders Teddy to bring Kurt in. Harrison is allowed to be alone with his father for five minutes and they hug. Dexter assures Harrison that he has been in tougher spots and he will get out of this one. Outside the station, Angela warns Audrey that "Jim" is dangerous but can't explain why until tomorrow.

Harrison walks over to the tavern and Tess gives him a room.

Logan gives Dexter a tuna sandwich to eat in his cell. He then takes a hamburger to Harrison in his room and they briefly talk about the situation. Harrison remembers watching his dad stalk the deer in the woods, but says nothing. At the jail, Dexter gazes at the moon thorough a window.

Meanwhile, Angela lies on the hood of her car, also looking at the moon. She suddenly mutters, "Motherfucker!" and rushes inside to call Angel Batista. She informs him that Dexter Morgan isn't dead and emails him a recent picture of herself with Dexter. Batista is shocked that he's alive and has been arrested. Angela says a few cases in Iron Lake are similar to the Bay Harbor Butcher victims. Batista remembers that Maria LaGuerta was murdered after she revealed her suspicions of Dexter. He tells Angela that he will arrive the next day with everything he's got.

Angela interrogates Dexter again. She accuses him of being a murderer and mentions the ketamine. She tells him that Miles O'Flynn testified that Dexter poked him in the neck with a needle. She then shows him an autopsy photo of Jasper Hodge and points out an injection mark on his neck, adding that there was ketamine in his system. Next, she shows him the dismembered body of someone murdered by the Bay Harbor Butcher, who also had an injection mark and the same drug in his system. Angela reveals to Dexter that Angel Batista is coming in from Miami and they will extradite him to Florida, where they have the death penalty.

Dexter tells her to turn off the camera so that he can talk. He refuses to admit that he's the Bay Harbor Butcher but claims that Kurt Caldwell has been an active serial killer for 25 years and he can prove it. He tells her to go to Kurt's cabin and how to find the hatch to the bunker. Angela swears, stands up, and orders Logan to put Dexter back in his cell. Logan asks why she turned off the camera, but Angela leaves without an explanation.

Harrison goes to Audrey’s house to get his stuff. She apologizes to Harrison, saying that it's her fault because she told her mother what he said at the party. Harrison tells her that it has nothing to do with her and they hug and kiss.

"Deb" talks to Dexter in the jail cell. She taunts him with the misguided notions and mistakes that landed him in this situation and insists that Angela will never let it go.

Dexter calls out to Logan, requesting some water. When he brings it, Logan lets his guard down for a split second. Dexter reaches through the bars of his cell and bashes Logan's face violently against the metal bars before spinning him around and putting him in a choke hold. Logan struggles but is unable to break free of his grasp. Dexter assures him that he doesn’t want to hurt him and that all he wants are the keys to the cell. Logan touches the keys on his belt and then decides to unstrap his pistol instead. He fires the gun backward through the bars, missing Dexter, who snaps his neck with one swift movement. Dexter calls Harrison from Logan’s phone and tells him to grab all of his stuff and to meet him at the spot where the white deer was killed. He leaves the phone on Esther’s desk and takes off in the police car.

Angela drives to Kurt’s cabin in the woods. She finds the hatch to the underground cabin and opens it. Once inside, she finds the trophy room of dead women, including Molly Park. She tears up and calls Logan but doesn’t get a response. She calls Teddy, who is at Kurt's lodge, and orders him to notify the state troopers, the FBI, and all of the back up he can get. She asks Teddy if he’s heard from Logan in the past hour and Teddy says no. Angela rushes back to the station and finds Logan, dead on the floor, and Dexter missing.

Dexter rushes to meet with his son and Harrison asks whose blood is on him. Dexter says he will explain everything later. Harrison realizes Dexter called him from Logan’s phone and that Dexter killed him. Harrison is furious, having believed that Dexter only killed bad guys. Dexter reminds Harrison that he has his own "dark passenger." Harrison insists that Dexter turn himself in as there’s no other way. Instead, Dexter chooses self-preservation and tells Harrison that he doesn’t have to come with him but he can't stay there. As Dexter walks away, Harrison realizes that his father is abandoning him all over again and he snaps. He runs back to the truck and picks up his rifle, loads a round into the chamber, and takes aim. He asks his father if his mom and Deb would be alive if it weren’t for him. A few deceased people appear in flashbacks. Dexter apologizes to Harrison for everything he’s done to him and says he deserves a better life and a better father. He tells Harrison to take the safety off the gun. He says it’s the only way out and instructs his son to shoot him in the heart. Harrison pulls the trigger and Dexter collapses on the ground. With his final breath, he tells Harrison that he did good. "Deb" holds his hand but pulls her hand away as he dies.

Angela arrives at the scene and finds Harrison standing over Dexter’s body. She orders him to drop the rifle and he falls to his knees, He confesses that he killed Dexter because he murdered Logan. When she tells him to get to his feet, he holds his wrists out, expecting to be handcuffed. Angela considers the circumstances and decides to spare Harrison the burden of paying for his father’s crimes. She embraces him, hands him some cash, and tells him to leave Iron Lake and never come back. He asks her to tell Audrey goodbye for him but she says she can’t because she hasn’t seen him.

Harrison rushes to Dexter's truck and picks up Dexter's letter to Hannah as Angela wipes down the rifle and calls in an officer-related shooting for herself. The letter is read in a voiceover as Harrison drives through town. He watches as Logan's body is carried out from the police station. Harrison then drives past Audrey’s house and sees her in the window, but keeps on driving. Police cars pass by in the opposite lane, heading to Iron Lake.

My dearest Hannah, this is the most difficult letter I'll ever write. You may have seen my name among the casualties of Hurricane Laura, and I believe that's for the best. I'd give anything to see you and Harrison again. To see him smile. To hold him. I celebrate his birthday in my heart. I want what every father wants: for his child to be happy. To live and love without fear. To share his gifts with the world. But we both know that, with me around, a normal life for Harrison won't be possible. This is not an easy decision. Sometimes I wish the hurricane had taken me, released me from the burden of my own urges. Instead, it showed me that I have to bear them alone. That's my fate. So, unless Harrison starts showing any dark tendencies, I beg you... Let me die so my son can live.

Dexter outside his burned cabin

Dexter discusses moving to a big city with Harrison

Audrey and Harrison at police station

Angel Batista at home in Miami

Pic of Dexter sent to Angel 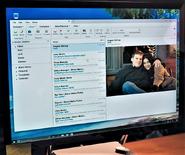 Angel shocked that Dexter is alive

Dexter accused of being the Bay Harbor Butcher

Audrey feels guilty for telling her mother about "Jim's" name

Horrified by the sight

Logan ordered to give keys

"Open your eyes and look at what you've done!"

Dexter shows Harrison where to shoot him

Harrison expects to be arrested

Angela and Harrison with Dexter

Harrison drives away from Iron Lake
Community content is available under CC-BY-SA unless otherwise noted.
Advertisement