Dexter: Issue 3 is the third issue in the Dexter Comics series created by Jeff Lindsay (author of the Dexter Novels) and illustrated by Dalibor Talajic.

Dexter Morgan isn’t just Miami’s #1 forensic blood splatter expert…he’s also a serial killer who targets other serial killers! Has Dexter met his match…and did he help create him? Dexter tests how sneaky he really is by infiltrating his rival’s lair…but has he actually stepped into a trap?

Dexter and Deborah are each dealing in their own way with the aftermath of the attack they suffered in Issue #2, when an unknown motorcyclist ignited Deborah's car with an explosive object. Deborah discusses the event with Dexter and she concludes that Deveaux is responsible because of his past as a Tonton Macoute. The firefighters deal with the fiery accident, while they head to the New Hope Foundation.

They arrive at the foundation and question Steve Gonzalez in regards to the guilt of Deveaux. He states that Deveaux could not be responsible for such a thing, and he believes that people can change.

However, suspicions arise when Gonzalez confirms that Deveaux missed three counseling sessions. Deborah and Dexter depart, with Deborah still sure that the responsible person is Deveaux. Dexter's Dark Passenger, though, senses something is off about Gonzalez.

While Deborah directs a task force in search of Deveaux, which ncludes putting out APBs and running checks on red motorcycles, Dexter takes matters into his own hands. He dons his killing attire and pays a visit to Gonzalez's penthouse in search of clues.

There he discovers how Gonzalez can afford such a nice penthouse and how real estate has helped him flourish. It involves the businesses of Mar Dorado and the New Hope Foundation.

Dexter thinks he is more clever than Gonzalez until, suddenly, he realizes he fell into a trap. He discovers that he has been recorded since the moment he entered the secret room by a camera located inside one of Gonzalez's paintings. While attending a gala, Gonzalez's phone receives a photo depicting Dexter invading his penthouse, to which he smiles. Dexter exits the building to continue the investigation.

Dexter arrives home and finds Astor and Cody watching a movie. He states that family life can sometimes be so demanding. He heads to his computer to continue his research into Gonzalez. While he is doing this, Dexter receives a call from Deborah, who states that she found Deveaux. To their surprise, he is dead. Deveaux's body is in the morgue near Bleek's corpse. 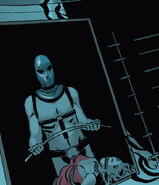 Astor and Cody
Add a photo to this gallery
Retrieved from "https://dexter.fandom.com/wiki/Dexter:_Issue_3?oldid=112260"
Community content is available under CC-BY-SA unless otherwise noted.