Dexter: Issue 2 is the second issue in the Dexter Comics series created by Jeff Lindsay (author of the Dexter Novels) and illustrated by Dalibor Talajic.

Events continue directly after the events of Issue #1.

Dexter, Deborah, and other members of the Miami-Dade Police HQ police investigate the crime scene involving the murder of Arthur Bleek. After discovering Bleek's connection to the New Hope Foundation, Dexter and Deborah head to the location of the company to interrogate Steve Gonzalez.

Upon arrival, they are greeted by Gonzalez, and his mysterious bodyguard, only known as Deveaux. Gonzalez flirts with Deborah to no avail and, when he is questioned about the murder of Bleek, he states that he does not know anything about it. Deveaux adds that the last time they saw Bleek, he was at an "evening challenge," which is a group session at the New Hope Foundation, and Bleek left at 9:30 PM. Deborah asks if they know where he went, and Deveaux replies, "Outside." Deborah threateningly remarks that he is not funny, However, Gonzalez explains that Bleek literally lived on the street.

Gonzalez proceeds to tell Dexter and Deborah about his program involving Mar Dorado and how the members return to Miami with enough funds to start a new life. "New life with new hope...that's our motto," says Deveaux. Deborah and Dexter leave to continue with the investigation.

They discuss the case, with Dexter suspecting Gonzalez to be the killer. However, Deborah rapidly targets Deveaux, believing that Gonzalez does not have a motive for the murder. Deborah orders Dexter to return to the HQ to run a background check on Deveaux. She then heads back to the crime scene. Later, Dexter discusses his findings with Deborah, informing her that Deveaux is a former Tonton Macoute. To Deborah, this gives more credibility to her theory.

They head to the New Hope Foundation to discuss this new finding with Gonzalez. Gonzalez says he knows about Deveaux's background and that the point of his organization is to forget the troubled past of his members and rehabilitate them by giving them a second chance. Nearby, a patient named Billy is being taken care of and he seems to trust in Gonzalez and his organization's purpose. Still, Dexter's Dark Passenger feels something is not right with Gonzalez. Dexter and Deborah leave the building to continue the investigation.

While discussing the case on the highway, Dexter starts to think that his Dark Passenger might be wrong this time, when suddenly an unknown motorcyclist approaches Deborah's vehicle and ignites it with a Molotov-like explosive. Deborah and Dexter manage to get out of the car before it's engulfed in fire.

Immediately, Deborah points to who the unknown biker might be - Deveaux. She states that since the Tonton Macoute used fire as a tool of fear, therefore, he is likely the person responsible for the attack.

The biker leaves the scene.

The unknown biker approaches with a molotov-like explosive 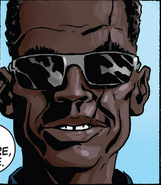 Miami Metro Police HQ
Add a photo to this gallery

Issue 2 original cover (2012)
Add a photo to this gallery
Retrieved from "https://dexter.fandom.com/wiki/Dexter:_Issue_2?oldid=101336"
Community content is available under CC-BY-SA unless otherwise noted.