Dexter's Apartment is a location in the Showtime series DEXTER

It's Dexter Morgan's (now former) place of residence, where he lives throughout the series, except during Season Four and the final scenes of the series finale.

Dexter considers the apartment to be his safe haven from the outside world and a place where he is free to reveal his true nature.

The apartment building is set near the waterfront. Amenities include a private pool and designated parking spaces. The apartments are accessed by an external corridor.

Dexter's 2nd floor apartment (later, condo) appears normal and well-kept, consisting of a living room, kitchen, work space, bathroom, and bedroom. Despite this, it contains secret places. Dexter's blood slide box (storing trophies of his kills) is hidden within an air conditioning unit. In the bedroom closet, his kill tools are locked inside a trunk. Also, a getaway bag containing emergency items (e.g. cash, passports) is sealed behind a wall.

Dexter lives alone, although he spends some of his time at Rita Bennett's house.

After her ordeal with The Ice Truck Killer, a traumatized Debra Morgan lives with Dexter until he persuades her to move out. Lila West spends some nights with Dexter, which causes conflicts with Debra.

Ramon Prado breaks into Dexter's apartment and trashes it.

During his marriage to Rita, they live in a house in the suburbs, with Dexter having some difficulty adjusting to family life. To have a quiet place where he can research his targets, and store his trophies and kill tools, Dexter secretly keeps his apartment. When Rita finds out (months after the wedding), she is angry and suspicious of why Dexter kept it. Now forced to give up his apartment, Debra takes it over.

After Rita is killed by Arthur Mitchell, Dexter and Harrison begin staying at the apartment. Due to crowding, Debra begins spending nights at Joey Quinn's apartment.

While Lumen Pierce is in hiding from Jordan Chase, she first stays at his empty house and then at his apartment.

The apartment remains the home of Dexter and Harrison. To have more space, privacy, and an additional entrance, Dexter buys the next door apartment - possibly 9B. He also hires Jamie Batista as Harrison's nanny, replacing Sonya.

After Debra breaks up with Quinn, she again stays at the apartment with Dexter and Harrison until she rents a beach house.

In "Do the Wrong Thing," Hannah McKay shows up unexpectedly at Dexter's place with a flowering plant.

In "Chemistry," it becomes a crime scene when Sal Price dies there from poisoning.

In "Goodbye Miami," when Dexter and Hannah are making plans to move to Argentina, he mentions that he needs to sell his "condo."

In "Remember the Monsters", Dexter fakes his own death and leaves Miami for the Northwest where he rents a room. It's not revealed who buys the condo, but Sylvia Prado is the realtor.

Adversaries who have been inside Dexter's apartment 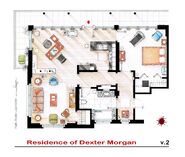 Dexter outside his apartment
Community content is available under CC-BY-SA unless otherwise noted.
Advertisement