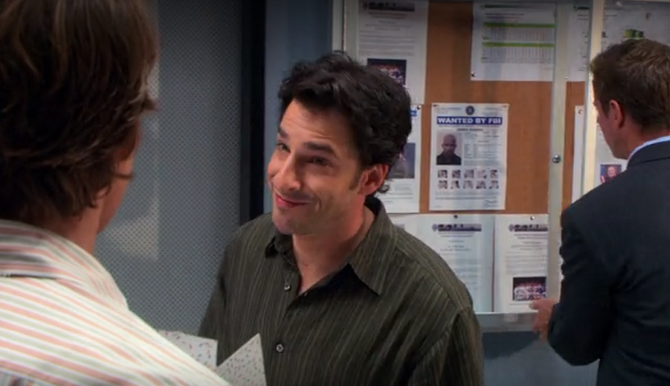 Detective Weiss is a character in Season Two of Showtime's series DEXTER.

He’s a detective in the Miami Metro Homicide Department who appears during the Bay Harbor Butcher Case. He isn't shown contributing to the case, just gossiping with other detectives as to whom the Butcher could be, once it's discovered that the killer likely works within the Miami Metro Police Department.

Weiss is fairly tall and slender, with dark brown hair.

Dexter Morgan arrives at work to find that “Lundy’s bees are buzzing” after “something has agitated the hive.” He approaches Detective Weiss, Angel Batista, Maria LaGuerta, and Robert Ramos, all gathered at a desk in deep discussion.

Batista: “My money’s on Connolly down in property.”
Dexter: “Looks like much ado about something in there.”
Angel: “Lundy’s got a suspect for The Bay Harbor Butcher, and bro, it’s one of us here."
Dexter: “That’s... disturbing.”
LaGuerta: “We’re not sure that Lundy’s pegged someone, but if he has, it sure as hell isn’t one of my people.”
Batista: “I’m sorry, Lieutenant, but I confirmed it myself last night. Everything points to someone in this house.”
Dexter: “Who in this house?”
Batista: “I don’t know, but something must have broke this morning ‘cause Lundy shut this P.D. out of the Task Force, brought more Feds in. So he definitely has someone in his cross hairs.”
Weiss: “What about Steinbauer in impound? He’s a freak.”
Ramos: “I bet it’s Wykoff from Records.”
LaGuerta: “Chico, please.”
Sergeant Lee: “What about Loring in Narcotics?”
Dexter: (voice-over) “Or it could be that murderous Morgan in blood spatter.”

After Dexter breaks up with Lila, she visits the homicide department as part of her stalking him. Several of Dexter’s colleagues invite her to go out for a drink. She accompanies Detective Weiss, Robert Ramos, Angel Batista, Vince Masuka, and Dexter Morgan to a bar. She entertains the guys by flirting with them and telling a dirty joke. Dexter ends up confronting Lila in the ladies restroom.

Dexter decides to honor James’s Doakes “sacrifice” by embracing his freedom. He wakes up early in a great mood, works out on his treadmill, fixes breakfast, and visits Rita for make-up sex. He then arrives at work carrying a box of Sadie's Donuts. As he exits the elevator, he runs into Detective Weiss. Dexter smiles and offers him a doughnut. However, Weiss refuses, saying, “I’m not really feeling like doughnuts, know what I mean?” Dexter does not know what he means, until he notices a flyer about James Doakes on the bulletin board. “Oh, right,” he thinks.

Wondering who Lundy suspects is the BHB

Masuka and Weiss in a bar

Weiss and Ramos in a bar
Add a photo to this gallery
Retrieved from "https://dexter.fandom.com/wiki/Detective_Weiss?oldid=112403"
Community content is available under CC-BY-SA unless otherwise noted.