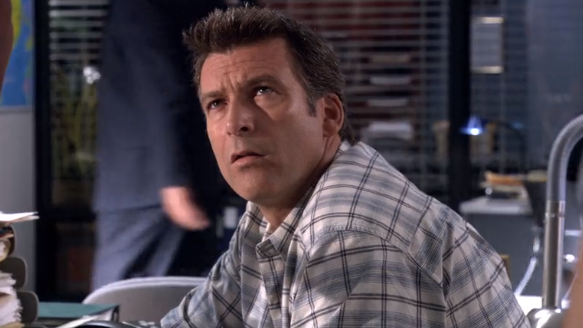 Detective Pullman is a character in Season One of the Showtime series DEXTER.

He is a Detective that works the Valedictorian Murder Case alongside Sergeant James Doakes.

Detective Pullman arrives with James Doakes at the crime-scene where a Yearbook Editor was killed. Pullman watches on as Dexter and Doakes go over his analysis of the scene, giving a theory about the killer having previous experience with a blade. Later, while detectives are being assigned to the Neil Perry case, Lieutenant Maria LaGuerta has Doakes and Pullman continue their work on the Valedictorian as his parents were high profile.

Dexter tracks down Jeremy at a park having disguised himself with a hoodie, shades, and hat. He and Jeremy begin walking, away from the public eye as Dexter orders him to face forward while they move deeper into the park. Jeremy catches whiff of an ambush and books it, with Pullman and Doakes, along with Detective Hill and who appears to be Detective Robert Ramos, rushing the young man. Pullman manages to capture him and Doakes puts the cuffs on.

Pullman is seen sitting in front of Dexter's office at a desk when he arrives later on, having received a page from Doakes. They both want his report on the murder and Doakes congratulates Dexter on being right but also expressing suspicion of how he's so often correct.

Following this, Pullman is seen along with Doakes interrogating Downs in the interview room. After Dexter has a word with Jeremy himself, Pullman comes in, beginning to throw furniture around to intimidate Jeremy. Dexter notifies the nearby public defender to head in there immediately.

Add a photo to this gallery
Retrieved from "https://dexter.fandom.com/wiki/Detective_Pullman?oldid=112398"
Community content is available under CC-BY-SA unless otherwise noted.