Detective McNamara (also referred to as "Mack") is a character on Showtime's series DEXTER.

He is a Detective with the Miami Metro Police Department and brother to Kara Simmons. McNamara vows to bring down Carlos Guerrero after Kara and her husband, Ricky Simmons, are murdered.

Following the deaths of Ricky Simmons and McNamara's sister Kara, he gives a eulogy at Ricky's funeral. Sergeant James Doakes approaches McNamara and Officer Smith offering his condolences, with the three of them discussing taking Guerrero down. Doakes makes a visit to Guerrero's church and accuses of him of murder in front of his family, which puts him in Guerrero's crosshairs.

Following an announcement by Lieutenant Maria LaGuerta regarding a suspect in the Ice Truck Killer Case, McNamara invites Doakes along on a ride with two other cops to blow off some steam and they drive to the Gables. They hand Doakes a clown mask and each of them puts one on themselves, exiting the car. Here is where one of Guerrero's top lieutenants lives and their plan is to beat him down. Doakes wants no part of the incident wanting to bring Guerrero down the right way and tries to talk Mack out of it. McNamara tells him he knows Doakes was sleeping with his sister and they're going to frame him for this, before running towards the house while Doakes bails leaving his mask behind.

Over the course of the following days Guerrero's men begin tailing Doakes at crime scenes. Doakes encounters Mack in the break room, where a confrontation occurs over his hatred for him sleeping with Kara. It's here where Doakes reveals Kara was going for a divorce, as Captain Thomas Matthews wanted him to pull out of the undercover operation but he wanted to keep going. Doakes and Kara began a relationship, however he lamented that he should have waited for the the divorce to go through and informs Mack that he backed the wrong cop.

Doakes continues to be tailed until he is abducted from his home and brought to a parking garage where Guerrero begins beating him down. He pulls out a gun intending to end the sergeant's life before he's shot in the shoulder by McNamara. Guerrera's enforcers are put down by the other cops. They approach and take Guerrero into custody, with McNamara declaring that he's theirs now. Doakes figures out that he was used as bait for this arrest and McNamara states that they're even now. The cops later celebrate back at the station; however, Doakes does not take part. 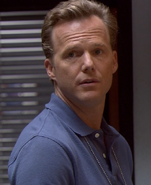 "Got you going after a goddamn cop, motherfucker!"

"We own your ass now"
Add a photo to this gallery
Retrieved from "https://dexter.fandom.com/wiki/Detective_McNamara?oldid=103536"
Community content is available under CC-BY-SA unless otherwise noted.