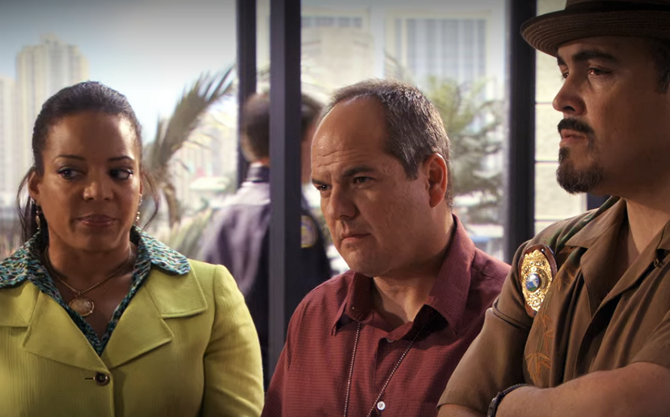 Detective Linker is a character in Season Five of the Showtime series DEXTER.

He is brought in when Astor Bennett and her friend, Olivia, go missing.

Lumen Pierce, who is watching Astor and Olivia, finds them missing when she returns to Dexter’s house after going to the drugstore. The door is open and the girls are gone. She frantically calls Dexter and he soon arrives. The neighbor, Elliot Larson, reports seeing a white van at the time. Lumen and Dexter fear the girls were abducted by one of Jordan Chase’s men. Although it’s risky for him, Dexter calls the police department for help, saying, “This is Dexter Morgan from Homicide. I'd like to report a probable child abduction. It's a white panel van. I have a partial plate.”

Dexter hurries to the station where his co-workers have already started an investigation. They include Maria LaGuerta, Angel Batista, Joey Quinn, Debra Morgan, and Detective Linker.

Linker: “We've issued a blanket APB on the van. NCIC has started a file on the girls.”
LaGuerta: “Until we get them back safely, Detective Linker will be our liaison to Missing Persons.”
Batista: “Did you call Olivia's parents?”
Dexter: “I tried. I couldn't get a hold of them.”
Debra: “What about Astor's grandparents?”
Dexter: “They hadn't heard from her. I didn't tell them she was missing, though. Didn't want to worry them. Yet.”
Linker: “Most missing children are abducted by someone the parents know. Is there anyone you can think of?”
Dexter: “No. Nobody.”
Quinn: “You sure? No one new?” (Dexter nods.)
Debra: “Where were you, anyway, when they were taken?”
Dexter: I can't lie about this, Dexter thought, not with Astor's life on the line. “I was with Jordan Chase. He...offered me some private sessions to help deal with... Rita's death.” (He notices their disapproving expressions.) “What?”
Debra: “A lot of fucked up people circling that guy, Dex.”
LaGueta: “A lot? Who? Besides Boyd Fowler.”
Debra: “Well, his head of security for one.”
LaGuerta: “I thought we cleared him.”
Batista: “May have been premature.”
LaGuerta; “Okay...What's going on?”
Batista: “The Barrel Girls Case might not be as closed as we thought.”
Dexter: (annoyed) “Can we just find the van?”

The police find a man at a gas station with a matching description to Elliot’s information. He turns out to be Barry Kurt, the boyfriend of Olivia’s mother, who is in Miami to retrieve Olivia after tracking her by cell phone. Barry is released, and they learn that the girls are being detained at a mall for shoplifting. Dexter, Debra, and Barry head there to pick them up.

LaGuerta, Linker, Batista, and Dexter
Add a photo to this gallery
Retrieved from "https://dexter.fandom.com/wiki/Detective_Linker?oldid=112736"
Community content is available under CC-BY-SA unless otherwise noted.