He was born in Savannah, Georgia and raised in the Bronx, New York. He attended Manhattan college briefly, worked as a laborer, landscaper, a cold caller at a brokerage firm, and finally a bartender in Manhattan, where a co-worker invited him to attend an acting class. 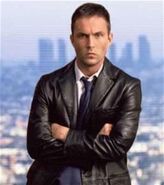