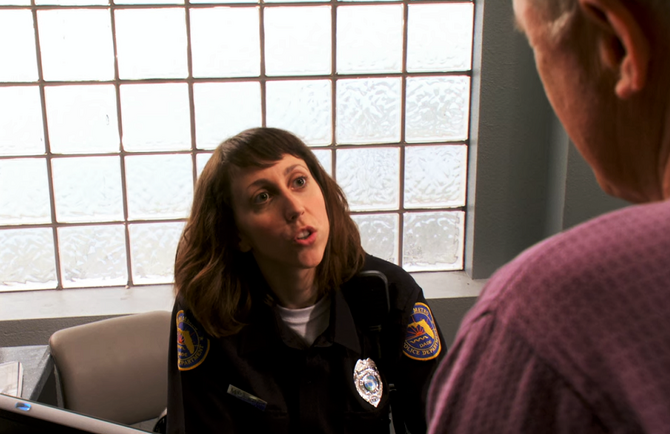 Desk Officer is a character in Season Four of the Showtime series DEXTER.

She briefly interacts with Arthur Mitchell at the front desk of the Miami Metro Police Department.

Arthur has followed Dexter from the arcade back to the police station. Strolling fearlessly inside, he finds himself amid a group of visitors. At the desk, a smiling Arthur politely asks if a Kyle Butler works there. While the officer is checking a list of employees, Arthur surveys the area. After a few minutes, the desk officer tells Arthur that no one by that name works there. Arthur apologizes, saying that it’s his mistake. He then picks up a brochure and steals a visitor’s pass from an elderly woman, after which a guard allows him to pass through the metal detector.

Now that Arthur has infiltrated the station, he wanders around looking for Dexter. He soon notices a photo of Dexter with his bowling team and also whiteboards of his gruesome crimes. While in the homicide department, Arthur notices Dexter in his office. To Dexter’s horror, he sees Arthur looking at him and hurries out to face him. Arthur, amused, lifts up Dexter's ID badge and says, "Hello... Dexter Morgan."