“Dark Echo” is Season 2 of an animated Dexter Early Cuts web series released by Showtime in 2010. Each of the six Chapters are approximately two minutes long.

Dexter Morgan is challenged by a copy-cat killer who does not follow any sort of code.

During a thunderstorm, Dexter attends Harry’s funeral. He recalls that Harry was the first one to glimpse his darkness. As a cop, Harry recognized something so primal it could never be expunged, only tamed. Because he had a bad heart, Harry knew that he wouldn’t always be around. Thus, he taught Dexter a code to guide and protect him. At the funeral, Dexter observes the others grieving, but he only feels empty inside. He always feels that way except when his dark passenger wants to play. Dexter remembers how shocked Harry was when he walked in on him with a victim, Juan Ryness. Harry died shortly thereafter.

Next, Dexter is shown as a student in medical school, learning the most efficient way to dismember a human body. Associate Professor of Criminal Justice, Robert Milson, (found in Harry's files) is revealed to be Dexter’s next target. At age fifteen, he strangled his girlfriend, claiming it was rough sex that got out of hand. Milson got off with a slap on the wrist, and was released at age eighteen. All these years later, only Dexter knows about Milson’s past.

Dexter is stalking his next victim, Dr. Robert Milson. Dexter never had him for a class, but seven missing coeds did. As a criminologist, Milson knows how to cover his tracks and is shown dumping a woman into a swamp.

On the day that Milson gives his semester final, Dexter plans to capture him while he’s grading papers alone in his office. That night, as Milson is dropping coins into a vending machine, Dexter throws a garrote around his neck and drags him away. The bag of chips is also taken by Dexter.

Milson is placed on a kill table that’s surrounded by photos of his victims. Dexter reveals that he is also a killer with multiple victims. A little amused, Dexter tells Milson that one of his esteemed colleagues said that he has “steady hands.” Then he plunges a knife into Milson’s chest and saws him into pieces. Meanwhile, Dexter is unaware that he is being watched by a young man.

Dexter drives to a remote area, noting that it only takes a few days for a body to decompose in Florida’s heat and humidity. He thought, Over a million acres of Everglades is the perfect place to “let nature take its course." An alligator begins to feast on Milson. Dexter, also hungry, opens the bag of chips.

Dexter is outside on campus, reading a book. Nothing beats Miami in January, he thought. A new year, a new semester, new victims. He picks up a police file about Jenna Lincoln, noting that tragedy seems to follow her. She and her sister had lost their parents to a late night intruder, who turned out to be Jenna’s boyfriend. When arrested, he said that Jenna put him up to it. Harry believed him, but a jury didn’t. Less than a year later, Jenna’s sister suspiciously drowned in the family pool. That left Jenna to solely inherit the family estate on her 21st birthday, which would be the next day.  Too bad she won’t make her own party, Dexter thought.

Dexter is driving a pick-up truck, while holding a tree-shaped cookie. It’s the first Christmas without Harry and he’s tried his best to be there for Deb since he died. That’s included eating her home-made treats. He throws the inedible cookie out the window and vows to give Deb baking lessons next Christmas.

That night, Dexter parks outside Jenna’s place and checks his watch. He knows her routine of TV shows before bed, and now he’s going to introduce her to his ritual. Dexter gets out and begins to pick the lock, but the door is unlocked. He wets a cloth with chloroform and enters her bedroom, however, Jenna is gone. On the bed is a note labeled “DEXTER” with an address: “973 145th St,, Apt 5H.”

Dexter knows that Harry wouldn’t have approved of him going to the location, but he’s beset by curiosity. He finds the apartment, but it too is empty. Through a window, he notices a light being switched on in another building. Dexter is able to see Jenna, who is gagged and wrapped in plastic. An unknown man lifts a knife and stabs her in the heart. That was me, thought Dexter.

Dexter has just witnessed a man kill Jenna by copying his M.O. He hurries over to the other building to dispose of her body and clean up after his “not-so- secret admirer.” The man obviously knows that Dexter is a killer and could be reaching out to him in his own twisted way.

Needing to identify the copycat killer, Dexter skips class. He views the man as young, impressionable, malleable, with dark urges not yet fully formed who wants to be taught. The man is roughly his height and build.  As Dexter looks through photos, he suspects Peter Thornton, someone who fits the description. Peter was Dr. Milson’s graduate teaching assistant, and Dexter heard a noise outside the office the night he killed Milson. During his research, Dexter learns that Peter was responsible for his father’s death during a hunting trip.

Dexter is on the pier, waiting for Peter to show up. This is the kind of heart to heart I’d usually have with someone when they’re on my table, he thought. The fact that Peter nabbed Jenna before me is moot. She was going to die that night regardless. But I’m not looking for a sidekick.

Peter arrives, happy that he heard from Dexter. They acknowledge watching each other’s kill “show” and agree that Milson got what he deserved. Peter is annoyed that he had to follow Milson’s rules and was only allowed to watch. He hasn’t taken an innocent life, Dexter thought. I don’t have to kill him. Just scare him off. Dexter states that there are always rules, and Peter asks Dexter to show him because they are the “same.” Dexter retorts that they are not the same and, if he contacts him again, he’ll regret it. Dexter then walks away from Peter.

It’s his word against mine if he were to go to the police. They’ll never find Milson’s body, Dexter thought, though they will find Jenna’s with Peter Thornton’s fingerprints all over it if he didn’t get the message.

At a crime scene later, Dexter and Peter stare across a body at each other.

Dexter is sitting on a roof, feeling responsible because Peter killed an innocent man that day. It was careless of him to kill Dr. Milson in his office, enabling Peter to see the darkest part of him. He stared into the abyss and witnessed a kindred spirit, Dexter muses.

To keep Deb safe, Dexter makes up an excuse for her to stay with Camilla and Gene for the weekend. If the night goes wrong, he knows they will take care of Deb as if she’s their own daughter. He views them as good people, more like family than friends.

Dexter packs a bag with knives, a saw, and rolled cord. I have to introduce Peter Thornton to the Code. Without it, he’s just another killer. Without it, I would be, too. But unlike me, it won’t be a salvation.

As Peter is drinking at a bar, Dexter watches him through the window. Afterward, Peter drives home, stopping for fast food, as Dexter follows him. Thornton crossed a line when he killed that campus guard, Dexter thought. Left his body for the police and me to find on my way to class. He won’t stop killing until I give him the one thing he wants most.

While Peter is taking a shower, Dexter sneaks into the bathroom. He wants to connect, to no longer walk alone, to meet his maker. I’m more than happy to oblige. When Peter steps from the shower, he sees a message on the steamy mirror: “Warehouse, I have something to show you.” Peter grins when he finds a bag on his bed holding a circular saw.

On his way to set a trap, Dexter thought, Growing up, my father and I used to hunt. It wasn’t for sport. It was to stave off my Dark Passenger until I was old enough to understand. Those hunting trips were all about teaching me the Code. The number one rule: Don’t Get Caught. It’s the only way you get to kill another day. Once in the warehouse, Dexter readies himself. Tonight’s the night. I’m going to put my father’s code to the test. Either I’m its worthy heir and I survive or I’ll be consumed by my spawn. It’s how it should be. Hunter. Prey. Let the game begin.

Peter enters the warehouse, carrying the bag with the saw.

Peter approaches what appears to be a body wrapped in plastic on a table. He reaches out to touch it, but he suddenly turns and asks, “Hello?” Behind him, Dexter rises up, sheds plastic, and answers, “Surprise.” He grabs Peter in a chokehold, but Peter fights back and knees Dexter in the head, causing him to fall down. Okay, this isn’t going too well, Dexter thought.

Peter holds up a knife, stating angrily, “You’re nothing like I hoped.”

He’s disappointed I’m not what he wants me to be, thought Dexter. A mirror image to validate his own darkness. Now the monster doesn’t like what he sees. He didn’t listen. He’s not me.

Dexter gains the upper hand by holding plastic over Peter’s face, ending with Peter on the table. Dexter admits that he was going to let the “whole Jenna thing” go, but then Peter killed the innocent campus cop. Gagged and terrified, Peter listens to Dexter’s ritual heart-to heart. “You saw what I did to the dear professor and thought, ‘Hey that guy’s just like me.’ But what you were lacking was context. You couldn’t know my father taught me to only go after those that deserved it. Now he’s dead. No, I didn’t kill him. Just the opposite. When I do this, I honor his memory.”

Dexter closes in on Peter with the circular saw, ending his life.

After dark, Dexter buries Peter’s remains in a remote area. Peter Thornton was a defective copy I had to destroy, never to know what he was missing. The code, a gift from a loving father.

The next day, Dexter kneels at Harry’s gravestone to place flowers. I miss you, Dad. Well, as much as I suppose someone like me can. I read once “Good men must die, but death cannot kill their names.” Harry Morgan did all he could to make sure I would never wind up like Peter. I may be no angel, but I’m no demon either.  I’m just my father’s son. And without him to turn to, there are a few things I’m going to have to figure out by myself. 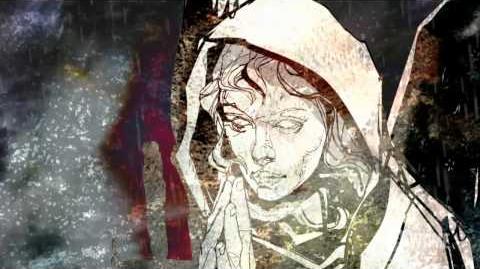 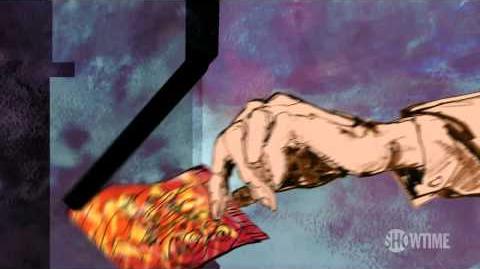 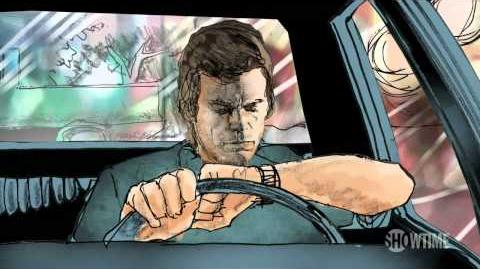 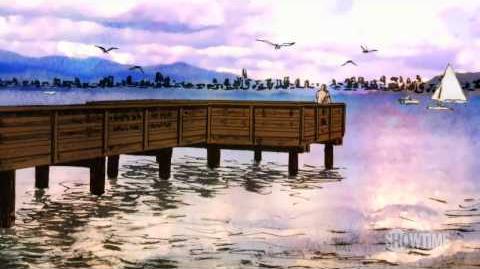 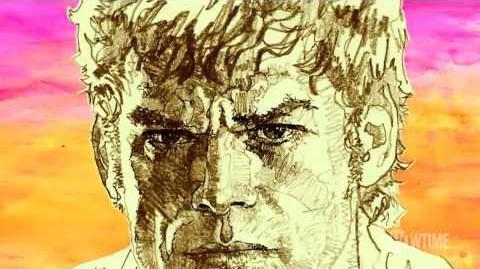 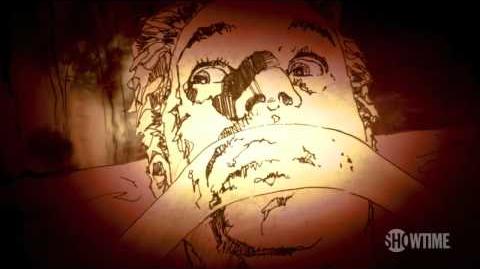