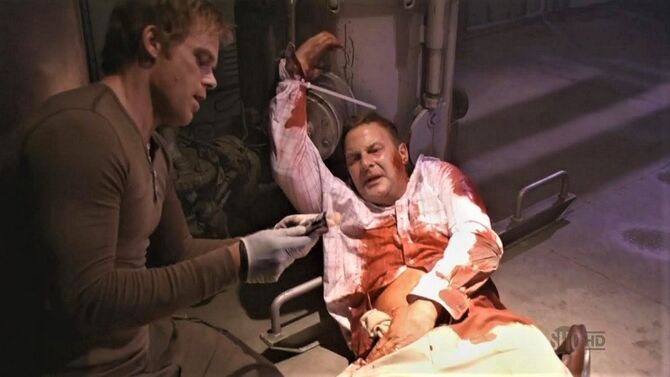 As a member of the Barrel Girl Gang, he raped and tortured his victims. His exact method of rape was to stick three fingers into his victim's mouth when raping her. It was also his role in the group to select the victim, drug her, and abduct her.

Boyd Fowler killed the women via barrels of formaldehyde jumper cables, and then dumped the bodies in a swamp.
Cole Harmon further transported them to an unknown location.

From adolescence, he raped and tortured women under the direction of Jordan Chase.

Dan Mendell is a character in Season Five of the Showtime series DEXTER.

He is a member of the Barrel Girl Gang, five men who are responsible for the rape of fourteen women, and the murder of twelve of them.

He lived a seemingly normal life, and worked as a children's dentist. His wife, Laura Mendell, and daughter, seemed to be unaware of his dark activities.

Dan is a slightly heavyset man in his mid-30s with short, curly blonde hair. He wears a button-down shirt and beige slacks.

When Dexter first meets Dan in the warehouse, he is already injured and fearing for his life after being shot by Lumen. Dexter doubts that Dan is actually one of Lumen's abusers. Dan plays innocent long enough for Dexter and Lumen to step away to talk privately. During this time, Dexter overhears him cursing into Lumen's cell phone, saying that the "last fucking bitch is alive." Once caught in his deception, Dan becomes belligerent and foul-mouthed, but this is short-lived as Dexter quickly kills him by snapping his neck.

Lumen dons a disguise and uses her unique abilities to track down Dan in a bar. She forces him to drive to a warehouse and enter it. Once inside, she fires five shots at him (with one bullet hitting his body), and she believes him to be dead. Not knowing what to do next, she calls Dexter Morgan who is with a captured Lance Robinson and is in the middle of a Kill Ritual. Annoyed, he drives to her location in a warehouse.

Meanwhile, Dan manages to get up and flee the area, leaving a trail of blood that Dexter follows while illuminating it with Luminol. Eventually, the two of them come upon the building where the blood trail ends. As they search for Dan, Dexter expresses his annoyance to Lumen. Soon, Dexter spots Dan through the grating in the floor, where he is hiding. Dexter pulls him out, ties him up, searches his wallet, and begins to question him.

Dexter looks on as Lumen and Dan argue with one another, with Dan playing the part of an innocent dentist who is a father and husband. After a bit of a skirmish that leaves Lumen's cell phone on the floor, Lumen and Dexter move to another to settle their dispute about whether to kill Dan. Suddenly, Dexter hears Dan talking on the cell phone. When they confront him, Dan becomes defiant and threatening toward Lumen. Realizing that Dan is one of Lumen's rapists, Dexter immediately snaps his neck.

Because of the impromtu way in which Dan was killed, Dexter is unable to dispose of his body in the usual manner. Things are further complicated by another victim, Lance Robinson, whom Dexter had already drugged and left in his car after Lumen called him.

As the police respond to the report of gunshots in the warehouse, the M99 Dexter used on Robinson wears off. Robinson panics and escapes from Dexter's car. Dexter quickly chases down the naked Robinson (who is still half-wrapped in plastic), as his sister and Vince Masuka approach the crime scene. Mere moments before being exposed to the police, Dexter catches up to Robinson, hastily strangles him, drags his body into the building, and lies it next to Dan. Dexter places Lumen's gun in Robinson's hand just before the police arrive.

Masuka investigates the scene and determines that the two men killed each other after an unusual sexual escapade that turned violent. Sometime later, however, Debra uncovers Mendell's involvement with the Barrel Girls Case.

Dan, fearful at being found 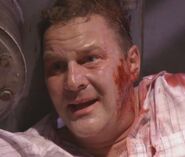 Dan claims that he is innocent